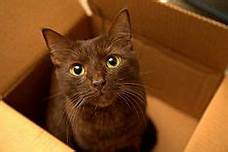 The Havana Brown is a breed that is recognized by the cat fancies of Britain and North America. It is a distinctive cat with a rich brown coat and an amiable personality. The breed has slightly different credentials, depending on which side of the ocean it was bred on.

In the 1950s, breeders in Britain and America developed two very superficially similar, yet distinct breeds. In North America the breed is known as the Havana Brown. In Britain, their version of the breed is classified as a Foreign Shorthair.

In Britain, the Foreign Shorthair

In Britain in the early 50s, two breeders set out on a program whose aim was to produce a brown cat. The cat came from a seal point Siamese and a black shorthair with seal point ancestry. Both of these cats carried the chocolate point gene. This breeding resulted in a  solid brown kitten. It was first exhibited in 1953.

Similar breeding experiments in the United States resulted in the first Havana Brown being born in that same year, 1953. This American strain was later strengthened from British imports.

The “Havana” name became the choice, reminiscent of the brown rabbit breed of that name. Others say that the name came from Havana tobacco, because of the color.

There Are Records of Other Brown Cats 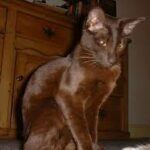 There are also records of brown cats of the Siamese type shown in Britain as early as 1888. Another look-alike brown cat was exhibited in Britain in 1894. This cat was called the “Swiss Mountain Cat.”

Again in the 1930s, a cat listed as a “brown cat” was exhibited These early examples were probably the result of accidental matings between Siamese and other shorthairs. However, no trace remains of these early brown cats.

In 1958 the breed was first recorded in Britain, known originally as a Chestnut Brown Foreign. The name was later changed to the Havana.

From 1964 on, British and American breeding practices became different. The British breeders continued to back-cross the Havana with the Siamese, to obtain the look they wanted.

In the United States, American breeders prohibited crosses with Siamese and instead developed the breed by always mating Havana Brown with Havana Brown. However, this practice has limited the North American gene pool.

Both the United States and British versions have the very rich and glossy mahogany coat, brown whiskers, and oval chartreuse eyes.

The British standard for this cat is for a cat that is Siamese in type. The body is long, svelte, lithe and muscular. The tail is long, thin and tapering. The coat is short, glossy and fine.

There should be no variation in tone of the hair from the roots to the tips, and there are no tabby markings or white hairs. The nose is brown, paw pads are pinkish brown, and the almond-shaped eyes are green.

The cat’s eyes are slanted toward the nose. Shoulders and hind quarters are the same width. The long, slim legs are longer in back than are the front legs. Paws are small, dainty, and oval.

The head is a long wedge with no whisker or nose break. The muzzle is fine and ears are large and pointed, and wide at the base. The neck is long and slender.

The American version of the Havana Brown is closer to the Russian Blue in confirmation. The body is semi-cobby 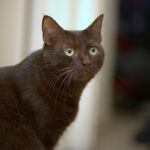 rather than muscular. The head is shorter. There is a distinct nose and whisker break. The large ears are tilted forward, and have rounded tips. The tail is medium long, and a bit more firm and muscular than the tail of the British Havana Brown.

Recognition of the Lavender Havana

In America, most organizations will recognize the lavender Havana. This cat is bred by mating a chocolate point Siamese to a Russian Blue. In this cat, the coat is pinkish-grey and should be solid from roots to tip. The breed has pink nose leather and paw pads; this cat’s eyes are chartreuse.

These cats have a gentle, affectionate disposition and quiet voices. The American breed has the reputation for ceaseless activity in the house. Therefore, this cat needs to be provided with a large selection of playthings. 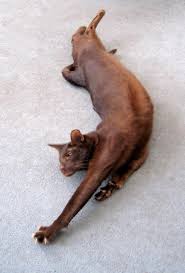 The phrase, “chocolate delight” is often used to describe this cat. It is alert, intelligent and affectionate, as well as being known to be occasionally mischievous. The cat gets along with other cats, dogs, and children. Most of them are outgoing, playful and talkative. This is a cat who insists on having the last word.

This Cat Likes to Touch Before It Sniffs

When investigating new objects, the Havana Brown likes to do so with its paws, rather than smelling the object, as most cats would do. The Havana believes in the tactile approach.

Your Havana will also follow you around the house, so you will not get lonesome when you have this cat for your friend.

The British Havana Brown tends to be more vocal than its American cousin. In both British and American breeds, the kittens are born with their adult color. However, their large ears look too big for their body until the cat grows into them. The lavender Havana kittens sometimes show faint tabby markings, which disappear as the coat matures.

Both breeds should be combed twice weekly. In addition, rub the coat occasionally with a chamois cloth or silk scarf to help maintain the sheen of the coat.

This information was taken from “The Encyclopedia of the Cat,” by Michael Pollard. This great edition contains 1,000 pictures and features every cat breed. If you would like your own copy of the book, click on the image or the blue highlighted title below, and you will be taken to Amazon, where you can purchase this book.

Please note, that as an Amazon associate, I may receive a small commission from your purchase.