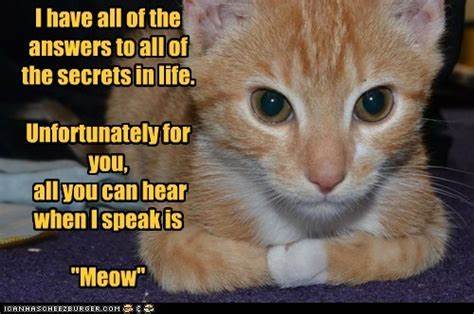 Science works on a way to translate animal communication into some kind of language we can understand. In the meantime, we must make our best of things by trying to figure out what our fur baby is trying to tell us. In other words, we need to try to decode the mystery of the cat mind.

Lucinda Puts In Her Two Cents

Lucinda, my literate cat, has her own ideas about why cats have come to live with us, and she told me how cats feel in no uncertain terms. She says, “We are blythe spirits, brought here to help you lighten your load — if you will just let us! We live in the present and wish to bring you happiness. We would love it if we could sit down and have a long conversation.

We don’t think much about time. Don’t talk to us about the future — We have no future; all we have is now. Our lives are so short, compared to yours, that we must live in the moment. The present is our only guarantee.”

Well, that puts us in our place! Still, how nice it would be to have a translation for the cat language. I do feel we have received a bit of misinformation about cats, or perhaps we have just interpreted incorrectly.

Does A Cat Sleep During Cat Naps?

We learn that cats normally sleep a great deal, but often when they nap they may not truly fall asleep. I have proof that such is the case.

If my cat curls up and naps on the sofa in the office, he may appear to be sound asleep. I can sneak by him very quietly to the door, look back, and he hasn’t moved.

So, I go into the kitchen, pull out a tortilla, and heat up my tortilla grill so I can make a quesadilla.

The tortilla toasts, so I get out the bag of cheese from the refrigerator. Now, remember, the last time we checked, the cat was asleep on the sofa.

I open the cheese bag, put cheese on my tortilla, and, voila! A cat sits right beside me. Actually, he suddenly appeared there as soon as the cheese bag opened.

Who knew the opening of a bag of cheese in another room could make enough noise to wake a sleeping cat? Well, any time you want proof, just come to my house and I’ll demonstrate. With such good hearing, and such ability to interpret non-language rustlings, why does the cat have to utter a sound?

You see, he knows that I always give him a small bite or two of cheese, so he doesn’t miss any opportunities.

How Well Does Your Cat Understand You?

Yes, yes, many times we can figure out what our fur baby wants to tell us, but wouldn’t it improve things if we could translate his many sounds?

To tell the truth, I believe the cat understands what we want to say more times than we might guess. Mocha has been with me for almost four months, and he learns fast. When he misses food from his puzzle ball, I will point at it. He has learned to look where I point.

Today we went out on the front deck, Mocha with his vest and leash, and enjoyed the outdoors together for a bit. Mocha always likes to munch a little grass. He sat beside me, and I pointed to the edge of the lawn. “There’s some good green grass. Better try some.” The cat walked over and started munching.

Things may be changing. Scientists have long been developing some kind of app which can translate animal sounds into their English meanings. A story by Emily Anthes in the New York Times tells of a new app called “MeowTalk.” You guessed it; when you download this new app, it promises to convert meows into English.

The first time Emily tried the app on her cat, she was less than satisfied with the translation she got. She tried again about a week later, when she had returned from a four-day trip. When her cat saw her, she meowed and then purred. The app translated the meows and purrs into “Nice to see you,” and “Let me rest.” Progress!

Representatives of the firm believe in the importance of understanding what cats say, and of trying to give them a voice. Their development of this product represents a growing interest in using machine-learning intelligence to decode animal communication.

This idea has been used successfully already, to some extent. Machine-learning systems, for example, have been developed which can detect and extract patterns from large data sets. These systems can distinguish between rodent squeaks that they make when they are happy, and those they make when under distress.

So, how much of your cat’s language and behavior can you translate? It seems to me that if we observe carefully, we can already figure out several messages. In the course of thinking about my cat’s actions, I can see that he does try his best to let me know what he wants. It might be nice to be a cat for a day, so we could learn how kitty’s mind works.

Or, perhaps I’ll just try out the “MeowTalk” app.