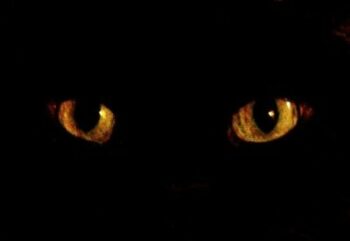 Have you ever wondered what your cat sees when he looks at things through those beautiful cat eyes? How do cats see the world? Let’s learn about their vision.

Vision Development Based On Instinctual Needs

Think first about your cat’s vision as developed to accommodate his instincts. A cat is crepuscular, which means that kitty becomes most active at daylight and dusk. Thus, his eyesight has evolved to allow him the ability to hunt in the dim light of early morning or twilight.

Also, the size and shape of a cat’s eyes help the vision at such times of day. These very large, round eyes allow kitty better vision when light becomes dim. The cat’s pupil will expand or contract depending on how much light is available.

In bright sunlight, the pupil will contract to a mere slit, the better to protect kitty’s retina from sun damage. When the light becomes low, the pupil expands, almost to the edges of the eye surface.

This expansion allows kitty’s eye to receive maximum light. Compared to our eyes, the cat can see about six to eight times better in low-light conditions.

Cats are not colorblind, but the colors they can see are limited. As with humans, cats do have up to three types of cones in their eyes; these allow them to differentiate between shades of color. They can distinguish between red, blue, and yellow lights.

Because human eyes have about ten times more cones than a cat’s eyes, we have the advantage when it comes to color. The number and distribution of the three types of cones in the human eye accounts for our extra ability to see a full color range.

Though we now know that cats’ color vision is limited, we also know they can see some colors. Domestic cats might see only blue and green shades, while some cats have difficulty telling the difference between red and green, seeing all red objects as green.

Cats do have a wider field of vision than we humans. Theirs measures about 200 degrees, while the human has only a 180-degree view. Also, cats’ peripheral vision has a greater range. Thus, they can spot a mouse’s wiggle without actually looking directly at the mouse.

This area gives the cat a great advantage, as his eyes have six to eight times more rod cells, which prove more sensitive to low light. Kitty can see better than we when the light becomes quite dim.

Part of the reason stems from the retina, and the photoreceptors located there. These process incoming electromagnetic radiation, translating the image to the brain, so the cat can see the images formed.

Because the cat has fewer cones and more rod receptors, he can see better at night. Also, the reflective layer behind the retina does its magic. This reflective layer, called the tapetum lucidum, causes the cat’s eyes to glow in the dark. The phrase comes from Latin, and means “bright or shining tapestry.”

The glow occurs because the tapetum lucidum acts as a mirror. These two “mirrors” serve as reflectors to bounce light back. Thus, the vision already absorbed becomes enhanced.

This mirror-like layer also allows the cat to see better at night.

Is Your Cat Nearsighted Or Farsighted?

Interesting, that it all depends on the environmental conditions in which the cat was raised. Available light and visual conditions affect the development of muscles controlling vision strength. A cat finds it difficult to switch between focusing on closer objects and those further away. The size of the cat’s eyes makes the switch a hard one.

As a result, cats raised indoors tend to be near-sighted and most outdoor cats become far-sighted.

How Does A Cat’s Vision Help Them?

Cats have the tapetum lucidum, which acts as a mirror for objects seen in the dark. This layer brightens an image because it reflects light to the rods, which stimulate them a second time. Thus, they see better than we in the dark.

The cat’s wider view than occurs and the extra rods at the back of the eye which causes them to have a second vision stimulus, provides a brighter image.

Where our visual acuity comes out to be 20/20, the cat’s vision is 20/100. This means that what the cat can see at 20 feet matches what a human can see from 100 feet. Because they are close-sighted, they can’t focus on an object within a foot from their eyes. Instead, they use whiskers on face and legs to sense near objects.

The Contrast Between Vision And Hearing

Cats have a very sophisticated sense of hearing. According to Animal Planet, “a cat up to three feet away from the origin of a sound can pinpoint its location within a few inches in a mere 6/100 of a second.” Cats can also hear sounds at great distances.

Between their advanced sense of hearing and their good night vision, cats appear well-equipped to handle hunting at dawn or dusk.

Here is a video about cat vision that will show the basic principles: