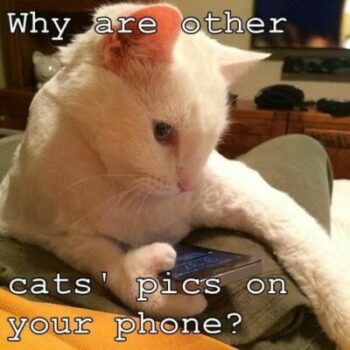 Do cats get jealous? Since cats have an emotional center in their brains just as we do, it’s no great stretch to see that jealousy in a cat can occur easily.

So, why would a cat get jealous? As you probably remember, cats are very territorial. This territory concept doesn’t just include the place where they live, but also anything they feel belongs to them, such as food, toys, or you.

If your kitty feels that the ownership of her territory just got challenged, she may act upon her negative feelings. Perhaps she’ll arch her back and hiss, or perhaps she will outright attack the challenger. Perhaps instead, she’ll try the “cuteness” tactic in order to regain your attention.

Therefore, if a cat doesn’t like someone or something, she will be quick to let you know. Just as with people, if your cat feels a lack of confidence of insecurity, it can lead to jealousy.

If kitty feels her favorite human does not spend enough time giving her the attention she deserves, she may react with jealousy. There might be good reasons behind such behavior.

Such feelings can be the result of bad experiences earlier in kitty’s life when she felt deprived or abandoned. Perhaps she has a fear of being hurt again.

If the cat did not learn from kittenhood how to socialize with other cats and especially with humans, this lack of training can lead to problems later in life. You have to teach kitty the proper way to behave.

At good shelters, they will have the cat interacting with other cats and people on a daily basis. One of my references pointed out that with such training, the cats would not act like they’d all been raised with wolves.

Many of you lead very busy lives, and schedules do not allow much time for bonding with kitty. Try to make some kind of change, so kitty gets the attention she needs.

Boy, do I see this reaction in Mocha! When he first receives an introduction to something he doesn’t like, his first reaction is to arch his back and fluff the fur to look bigger and scarier. If this technique doesn’t work, out come the teeth and claws.

I’ve introduced Mocha to a vest, so he can go outside on a leash. Talk about a fight! Getting that vest on him becomes the challenge of the Day. Claws and teeth all come into play. Once it’s on him, he settles down, but not without a fight first.

It’s not jealousy, but it’s an example of negative aggression.

2) “Forgetting” to use litter box

This ploy becomes an attempt by the cat to establish that she does not like the new situation. By going outside the box, she’s telling us her view of the situation.

Kitty rubs against you and purrs, to try to divert extra attention to herself, hoping to gain a return of extra affection from you.

4) Actively paying attention to the object of their jealousy

By acting in such a way, your cat puts herself between you and the person or pet to whom you give attention. Kitty says, “No! All attention comes to me!”

It’s time for the object of this negative attention to leave quickly. If the jealous cat becomes too enraged, she may attack.

Because a cat hates the unfamiliar, he may try some aggressive behavior toward a stranger, animal or human, to try to chase them off.

The cat may feel that there have been too many emotional defeats, and rather than to resort to aggression, kitty will simply withdraw. Aggression represents a waste of energy. Thus, the cat leaves each time the object of his jealousy appear.

SOME CAUSES OF CAT JEALOUSY

The cause of the jealousy has your cat feeling insecure or threatened. Read here for the most important reasons:

1) New member of the family

The new arrival can include a person or a pet. A new baby, a new housemate or partner, or a new puppy — these can all trigger jealous behavior in your cat, as he may feel any of these do not belong in his territory.

2) Less attention from you

For whatever reason — increased duties, socially or at work, anything that diverts your attention from your cat can lead to the display of jealousy. Find some way to include your cat more in your available time, so these jealous ideas can cease.

If your cat did not become properly socialized as a kitten, he may become overly insecure or dependent on his owner. If his mother did not teach him how to form attachments during kittenhood, as an adult, he becomes unsure how to act.

These changes could revolve around a move to a new home, or may stem from something as simple as moving food bowls to a new spot.

More people; more pets; crowding kitty’s space can cause a jealous reaction. Make sure you have enough litter boxes in the house. If you’ve added more people, make sure to set aside enough space for kitty to call his own.

You should not encourage nor tolerate jealous behavior. Give equal attention; leave a towel or blanket with the newcomer’s scent to accustom your old cat to the smell. Use separate dishes, but make sure they eat in sight of each other.

Techniques For Dealing With Jealous Behavior

First of all, find out what is making your cat jealous. What has changed in your life recently? Even if a very small change, it could affect kitty’s behavior.

Protect Against An Aggressive Cat

If your cat tends to become quite aggressive toward you, it might serve well to protect yourself. Try these suggestions:

1) If your cat jumps on your lap or anyone’s lap and begins to act aggressively, simply stand up and let the cat fall to the floor.

2) If a cat aggressively blocks entry to a space where you need to go, walk away and ignore until the cat loses interest.

3) Keep something on hand to distract the cat if it becomes aggressive. A friend with a biting cat has made a long cloth tube stuffed with layers of plastic. This “toy” can be used to give the cat as a substitute for your arm so you won’t get chewed.

4) Avoid situations that cause aggressive behavior.

7) If two cats become aggressive toward each other, separate them, then slowly reintroduce them, using positive reinforcement.

8) When a cat behaves well, give treats.

9) Consult a vet or animal specialist if you need more advice.

Time and patience can solve the problem. Spend a good amount of time giving your kitty lots of attention and love. Don’t expect a change overnight, but keep working on a solution. Eventually you can educate kitty the lessons she needs to learn.

Teach your cat that you care, and help reassure kitty that you value her a great deal.