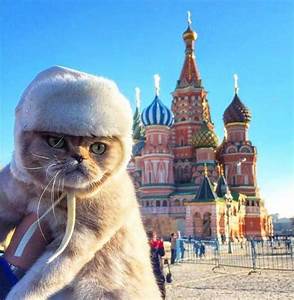 Hello, all, from Lucinda, your literate cat. My CCL (Cantankerous Cat Lady) says it is time I did a new book review. She asked that I do something different this time. It’s a book about Petya, a peasant, and the Russian tea samovar.

When the CCL first hired me to write for her, I told her I would only review books about animals. Now she has given me one without a single animal in it. It’s called “How the Tsar Drinks Tea,” written by Benjamin Elkin.

By now, I’ve had lots of reading and writing practice, so agreed to give this book a try. I had to learn more uncatlike things, but I did enjoy the book.

The one I read is hardcover. It is thin, but quite large. It’s big enough that I could curl up on it and take a nap. (My cousin cat, Pogo, couldn’t do that because he is too big and would spill over the edges.)

Sorry — I digress. CCL says I can’t see all the colors that she sees. Since I don’t know what she means, I can only describe what I can see. This book, for example, is full of intricate, detailed drawings. For those, I thank Anita Lobel, the illustrator.

CCL says the colors are mostly reds, oranges, and yellows, which I do not see well. To me they look like what you call blues and greens. Still, the book is lavishly and wonderfully illustrated. 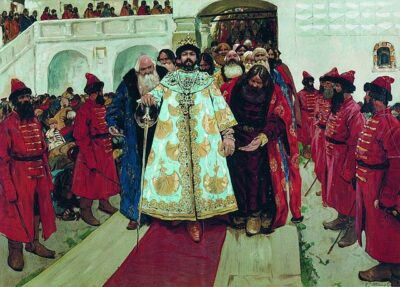 To understand this book, I had to look up a few things. The first was the title, “Tsar.” I learned that it was an old name for Russian rulers, something like an emperor.

Then, a samovar. I never saw that word before. It’s an elaborate container for brewing tea. CCL says when she first moved to Kodiak, the museum sold brass samovars. She wanted one, but they were too expensive.

You two-leggeds! You have invented such a wide variety of things that become part of your lifestyle. We cats lead a much simpler existence. However, since you are clever enough to make such an assortment, you might as well enjoy your talent.

In this story, a peasant, who is a poor farmer-type, found a brass samovar under a stump he removed. It was all green and dirty, and

he spent a great deal of time cleaning it up.

It was beautiful! When he finally brewed his first cup of tea he was delighted, and made up a little song:

Steam away, my samovar

Petya’s nosy neighbor crept up to the window and looked in He saw the samovar and believed it was gold, so he assumed Petya had stolen it.

Then he heard the song Petya sang, and was sure Petya had stolen the samovar from the palace.

Ivan, wanting a reward, went to the palace and asked to see the tsar. The sergeant of the Royal Guard would not alert the tsar, but instead required of Ivan what his business was about.

Now the Royal Guard sergeant also wants a reward, so orders Ivan to take him to Petya’s house. There, he seizes the samovar and arrests Petya, taking him to the palace.

As luck would have it, they were met by the captain of the Royal Guard, who also thinks he will get a reward if he returns the

When he gives it to the tsar, he is embarrassed when the tsar laughs and tells him the samovar is brass, and does not belong in the palace.

Then Ivan, the neighbor who reported Petya, told the tsar about Petya’s song. Bewildered, Petya sang his lines, and the room was shocked that he could say he was like the tsar.

Petya explains that he only meant that now he could drink tea like the tsar, even though he was just a humble peasant.

I must digress again. I will never understand you two-leggeds. What is it about your tea that is so special? As a matter of fact, you drink any number of things that I certainly have no use for.

I might take a few sips of milk, though CCL tells me cow milk is not good for me. Mostly, I drink just water.

I guess if you were to give me an unusual drink, a saucer of gravy might make me happy. Or perhaps roast beef au jus (I believe that is French. Why not just say “with juice?” I guess that doesn’t sound as good.)

Anyway, I could drink the “au jus” as my cup of tea and eat the roast beef as an accompanying snack.

I don’t think, though, that those things would be brewed in a samovar.

Meanwhile, back at the palace: The elaborate tea ceremony began. When the samovar was brought in, it was formed of solid gold and stood over three feet tall. The cover was a golden eagle, its wings outstretched, and a crown on its head.

Attendants brewed the tea while musicians played. When the music ended, the tea was ready. The brewing was timed to finish at the same time as the music.

Then he said to Petya, “Now you have seen how the tsar drinks his tea. Do you still think you drink tea like the tsar?”

“Yes, your majesty,” said Petya. The tsar was astonished. “How so?” he asks.

The tsar laughed and laughed, and then told Petya to take his samovar and enjoy it, saying, “Happy is the man who can enjoy his portion.”

Though I do not drink tea, I can understand Petya’s sentiment. When I drink from a bowl of cool, clean, clear water, if I could speak English, when I finished I, too, would say, “AH, GOOD.”

2 thoughts on “Lucinda Talks About The Russian Tea Samovar”