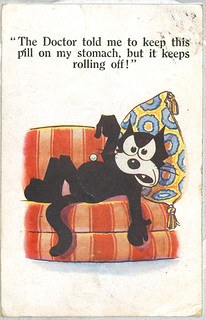 Good-day, wonderful two-legged readers, from Lucinda the literate cat. Today I’m helping out my CCL (Cantankerous Cat Lady), as she has had her hands full this week and has come up with no ideas for this post. Therefore, she asked me to write something today for you. I am writing about what I’m learning by observing.

CCL has recently learned that my cousin, Pogo, shows by his blood work that he suffers from the early stages of cancer. He barely ate anything for a couple of days, and has communicated to me that his tummy hurts.

The vet says the cancer tries to swell his intestines s nothing will pass through. She told CCL she wanted to put him on a steroid, called Prednisolone.

I don’t know much about steroids — after all, I’m a cat, and you two-leggeds invented these things. CCL tells me that they tend to stop inflammation and pain. We hope they will help Pogo.

In order to get this medicine into Pogo, he has to take a pill every day. CCL has had to learn how to 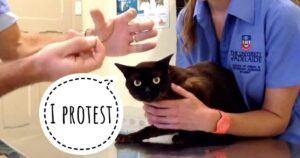 give it to him. Because of her inexperience with the process and Pogo’s stubbornness, she has had a challenge.

For the first pill, Dr. Schaff came to the house and gave it to Pogo. I don’t think he even had time to react, as she did the whole thing so smoothly.

Then, the next day, CCL took a turn. For this first time, the vet came and watched, to encourage her and teach her. It did not go that smoothly, but CCL finally got the pill down my poor old cousin’s throat.

Watch this video,  which shows the process. In the video, it looks simple.

The next day, CCL had to tackle the job by herself. She started out in a positive frame of mind, but her mood soon changed. She tried six times to get the pill into Pogo, and he managed to spit it out every time. Though he is very sweet and tolerant of many things, you will not find being forced to swallow a strange object on his list of tolerated activities.

I can understand. We cats do not like such a direct invasion of our bodies. We can prove very successful in thwarting our two-legged’s wishes when she tries to meddle with our space, and our bodies definitely fit in the “our space” category.

We have great amounts of patience when hunting. We can sit in front of a mouse hole for however long it takes to catch our prey. However, when it comes to messing with our routine or our body, we have no patience at all. We feel we should have absolute control over both of these, and will not put up with any interference.

The following video demonstrates how strongly we feel about such an invasion of privacy:

Remember, you two-leggeds can understand what we cannot: That to make these intrusions will bring an improvement in our well-being. We cats, not having the knowledge of the situation that you have, just see it as an attempt on your part to mess with us. If we already feel bad, we are sure we will feel worse after your invasion attempts.

By the time Pogo had spit out pill number 6, both CCL and the cat were rather upset. There had to be a better way!

So, back to the kitchen with the pill. CCL got out a “Temptation” treat and tried to bore a pill-sized hole in the side of it. Well, that process took some trial and error, too.

Six treats later, she finally got the pill in the treat. However, it would not fit all the way. Half of it stuck out one side.

If he only got half the pill, she only had to get one more half into the cat, so she gave it to him. Sure enough, Pogo bit the pill in half when he ate the treat, and that half fell on the bed where he sat. This time, though, CCL had a lucky break. The cat saw the pill drop to the bed and thought it was part of the treat. Therefore, he gobbled it up and swallowed it. Perhaps he never realized what he had eaten. 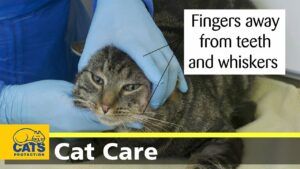 Pogo later communicated to me that he could not tolerate having his two-legged try to put that pill in his mouth. He felt she took advantage of her strength compared to his. He felt she should have wrapped that pill in something he liked right away, and they might not have had a problem.

He trusts her and knows she means him no harm. But he does not understand why she tries to accomplish her purpose by force. It is not at all comfortable when she squeezes his mouth to open it. He feels sure she would improve her technique with practice, but would prefer that she practice on the neighbor’s little dog, not on him.

Besides, if she practiced on the dog next door, she would not have as many pills left to give Pogo.

The next day they reached a successful compromise. CCL split the pill in half with a device she has, called a “pill splitter.” Then she had two small pills to deal with. She carefully gouged little holes in the treats, and put in the pills.

They didn’t want to stay in, so she stuck them in with a smear of cat food. Pogo took the treats with the pills enclosed with no problem.

As I write this, we have had one more day of the pill challenge. However, this time, though CCL had a bit of a problem getting the pill seated so it wouldn’t fall out, all went smoothly, and Pogo ate the 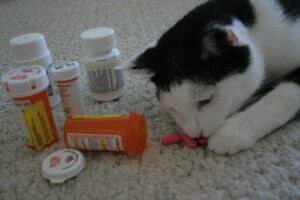 pill-stuffed treat with no problem.

Our vet has ordered some treats made to hold a pill inside, but they have not arrived yet. CCL says the mail, being very slow, forces Pogo to have patience. At least she has developed a method to use until the new “pocket treats” arrive.

Tell us in the comments below of the adventures you have had when attempting to give your cat a pill. Have you developed a fool-proof method? If so, here you can share your technique with other two-leggeds, as some of them may be in need of suggestions.

Meanwhile, may you remain unscratched, unscarred, and still friends with your cat, should you have to attempt giving kitty a pill.