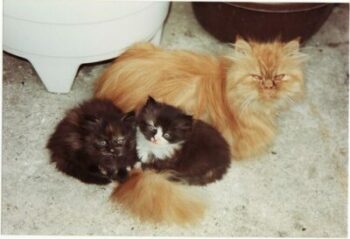 I’m sure we are all familiar with the beautiful Persian cat. However, did you know that in Britain, Persians are classified as Longhairs for show purposes, thus mixing in other breeds. In this article, I will focus solely on the variety of Persian cat breeds.

This cat has a cobby build, featuring short, thick legs, a round head, short nose and large eyes. The Persian proudly waves a plume-like tail and has a full, thick coat. Color of both the coat and eyes are variable.

The Persian is considered by many to be the ultimate luxury lap-cat. The cat became a status symbol early on, as the first Persians brought to Europe over 300 years ago were given as gifts to noble patrons. Thus the Persian became the cat of the aristocracy.

The cat soon became a court favorite in mainland Europe. This popularity soon spread through France to Great Britain, where they were first known as French cats.

They Are A Show Favorite

At the British National Cat Show at the Crystal Palace in London in 1871, Persians dominated the show. The most popular color was blue, but there were also numerous black and whites. The “orange,” originally called “red,” developed in the early 1900s, but remains a rare color.

Then, the Persian moved to the United states and became a favorite here. By 1903, American breeders developed their own judging standards. While the British Persians were less stocky, Americans preferred the more compact build. American breeders worked to produce richer coats.

Breeders in America have also produced the snub-nosed head, which they call the “modern type.”

Because of their placid nature and ease of adjustment to new experiences, they make a good show cat. They are not temperamental, and accept the show atmosphere easily. For this reason, they are also considered a good family pet.

Because of the long coat, they need daily grooming of up to an hour to keep the coat healthy and free of tangles. They molt and their long coat can build up an oily secretion. To remove it, many American owners believe in frequent bathing to alleviate the problem.

Fuller’s Earth or unperfumed talc powder can be applied to the cat’s coat, as long as you brush it out well afterwards.

Characteristics Of The Breed

Persian cat litters are not large — usually two to three kittens. These kittens are often very delicate at birth. They need special attention during the first few weeks.

Their lovely coat begins to appear from the age of six weeks to two months. It doesn’t fully develop until they are about two years old.

A Persian should have a broad, round head with a short, upward-turned nose. The cheeks are full, and the small, round-tipped ears are set wide apart and tilting forward. They are low on the head with large ear tufts. Eyes are large, rounded, and set apart.

The neck is short and thick, and the body is solid and rounded. The cat is deep-chested and broad across the shoulders and hindquarters. Paws should be relatively large and rounded, with good tufts.

The coat should be shiny, long, silky and flowing. Especially prized is a cat with ruffs and deep frills on and between the front legs. The tail is relatively short and is carried behind, rather than above the body.

There are over 60 coat colors and patterns in the Persian, though not all of these colors are recognized as show cats. The selfs, or U.S. solid colors include black, white, blue, red, cream, chocolate (medium to dark chocolate brown), and lilac.

Coat colors have particular eye colors associated with them. For most solid colors they are brilliant copper or orange. However, with so many varieties, eyes could be deep blue, orange, or copper, or one eye blue and one orange or copper. These latter are called “odd-eyed whites.”

It is important to note that in white Persians, the dominant white gene, W, can also lead to deafness, particularly in blue-eyed whites. The deafness can appear in one or both ears. It is caused by an inner ear deformity. It can be discovered in kittens four to six days old, and unfortunately, is incurable.

If the mother maintains communication with the kittens, they will normally survive and learn to compensate with other senses. However, the kitten should be kept indoors and should not be allowed to mate.

The black Persian has been popular almost as long as the white, and, in fact, is in number one place on the breed lists of the Governing Council of the Cat Fancy.

The most highly regarded black cat is the one in which the hairs are black right down to the roots. Most blacks have either a rusty tinge or flecks of white. It is unclear what the mature color will be until the cat reaches 18 months of age. Often a young cat will lose any rusty or white hairs by the time it acquires its full adult coat color.

The Blue And Red Persian

In Britain, the blue is the most popular variety. It was so in North America until

about 1960. These cats are relatively easy to breed, as a blue to blue mating always results in a full litter of blue kittens.

Red Persians, on the other hand, are quite difficult to breed. This is because tabby markings common in kittens often can still be found on the adult cat. To meet the standards, the coat should be a deep, rich orange (though called red) without markings or white hairs.

Then, North American breeders developed this variety. There still remains a preference for these cats to be a paler cream color than the ones in Britain. To maintain the color choice, the cat has to be crossed with other varieties, usually blues.

The Persian tabby can be blotched, or classic, ticked, mackerel, spotted, or a tabby-tortie variety. All varieties require a well-marked “M” on the forehead. These tabbies carry a variety of different rich color markings.

Almost all tortoiseshells are female, and the males are usually sterile. Therefore, they are difficult to breed. It is necessary to use a bi-color male for breeding, and a variety of interesting color patterns are produced.

These should have white feet, legs, undersides, cheeks and muzzle. However, not more than half the coat should be white. The white and the second color should be symmetrical.

These cats are classified according to the extent of tipping on the individual hairs. Smokes, which date back to 1893, are the most heavily tipped. World War II slowed down the breeding of these cats, but since the 1960s the number and popularity in North America have been restored.

In a smoke Persian, the colored tipping extends down the hairs for at least half their length and contrasts with the white undercoat. In a good example of the coat, the white shows only when the cat moves. In repose, they should look solid-colored.

In shaded tipped varieties, the tipping will extend about 1/4 of the hair length. This tipping extends to the back, flanks, legs and tail.

In a chinchilla Persian and shell cameos, the tipping is the lightest. It only covers about 1/8 of the hair length. Combined with the lighter undercoat, it gives a shimmering, metallic effect to the coat.

If you have a Persian, you have a fine animal with a background of solid breeding. Enjoy your sweet Persian kitty.

Information for this post came from The Encyclopedia of the Cat, by Michael Pollard.