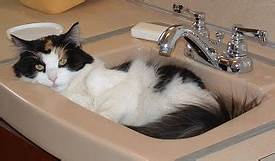 Greetings, two-legged readers. In this column, we will discuss the second half of the list of the 10 most common cat behavior problems. Maybe there will be something here that is helpful to you. Here we go:

Do you have a cat who stays awake at night and sleeps during the day? If so, be aware that such behavior is actually normal. 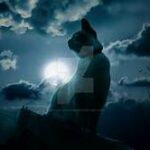 A cat’s circadian rhythm, or body clock (why didn’t they just say that? I had to look up “circadian.”) is set so that the cat sleeps during the daytime and is active at night.

In the wild, this practice was necessary. A cat could be more easily spotted by predators during the daylight, but found it safer to do his roaming and hunting during the night-time.

CCL (Cantankerous cat lady) wrote a post recently about the colors cats can see. She says we can’t see some of the colors you two-leggeds see. However, there’s a trade-off. We have better night vision.

That’s right — At night we have headlights. If you have ever seen our eyes on a dark night, you know what I mean. Our headlights are burning brightly.

What’s more, they are always in working order. We don’t have to change any batteries. The headlights do their job well, giving us in essence a built-in flashlight that illuminates the dark night.

Not a bad trade-off, especially as we have never seen the colors we are missing, so we can’t mourn their loss. Instead, we find our way at night quite well.

Many cats learn to adjust their circadian rhythm, so they can sleep at night with their two-legged companions. However, we still like to spend some time at night, playing in the dark. After all, we need some excuse to use those headlights.

My cousin, Pogo, and I spend a bit of time at night enjoying the dark. We run relay races and play hide-and-seek. Then finally we go back to bed and sleep until our built-in clocks tell us it is time to ask for breakfast.

Did you know that when a cat meows, he does it for you? Cats communicate with kittens and two-leggeds with that meow, but use other parts of their body to talk to other cats (Nose, whiskers, fur movement, eyes, tail, etc. Here’s a link: How do cats communicate? ) 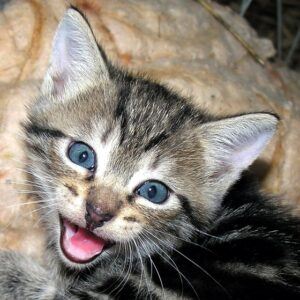 A cat can make 16 distinct sounds. It’s up to you to figure out what they mean. CCL says when we come to her and meow, she often stands up and tells us to “show her what we want.”

She says, “With Pogo, 9 times out of 10 he leads me to the bedroom, jumps on the bed, and tries to persuade me to join him.” Good try, Pogo.

CCL had a Siamese cat named Maxine who turned out to be a very vocal cat. She is not sure why the cat was so talkative. CCL says that Maxine was like some women who talk all the time, perhaps just to hear themselves.

Perhaps she just wanted attention, or to interact in some way with CCL. We’ll never know. CCL thinks she discovered that meows could get our attention, so she rather liked to cause an interaction.

A cat will often get anxious if their two-legged goes away and leaves them alone. Anxiety can cause the cat to become withdrawn and depressed.

If the condition is severe, I understand you can get a drug from the Animal Torturer (vet) that can help. There are also some simple ways you can use that might reduce his anxiety.

Remember, punishment does not work. It will just increase his stress and confuse him.

You can take short trips of, say, 15 minutes long, to get the cat used to your coming and going. Perhaps these ideas will make it easier for you to leave your cat without upsetting him too much. 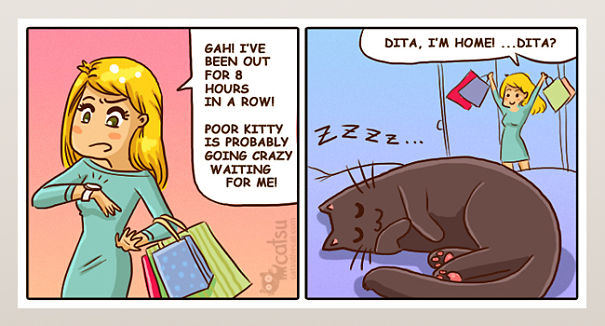 My cousin cat, Pogo, learned this bad habit while in the shelter, because the place scared him so much.

If you read the article about him on here, you will remember that he pulled out all the fur on his stomach and along paths down his legs.

Once he came here where there were no constantly-barking dogs and no other cats, he stopped the overgrooming. CCL says that at first, he’d be asleep and start dreaming about that place, and he’d begin pulling out fur.

She says she’d stroke his fur, call out his name, and talk to him, and he would relax again.

Now, he still does a bit of overgrooming, but is not so fixated on it. It is said that grooming releases some kind of feel-good chemical to the cat, so he finds it a way to gain pleasure in a stressful situation.

Pogo is learning to give up this behavior, though he still does pull out a little fur now and then.

The main way CCL has dealt with this problem is to remove stress and give Pogo lots of love when he tenses up and starts overgrooming.

There are many reasons for cat aggression. I will give a summary, and would recommend that, if you want more detail, get a copy of Wendy Christensen’s book, “Outsmarting Cats.” She writes a complete chapter on aggressive behavior, with lots of helpful information.

Here are some high points:

When cats fight each other, do not try to break up the fight or give it too much attention. That can cause things to escalate. If these are cats that live together, their conflict may be short.

Spaying or neutering your cat can be the best way to deal with such aggression.

If a cat gets in a down-and-out fight with a strange cat, you may need to break up the fight before it gets too serious, as injuries can occur. First, try to distract them. Make a loud, sharp sound, as yelling or clapping your hands.

Grab something handy (like a magazine) and fan one of the combatants. The cool breeze may distract him.

Toss a blanket, jacket, or other cloth item over one of the cats. Sometimes throwing a cup of water over them will do the trick.

CCL’s mother had an indoor cat that got out and got into a fight with a stray. Her mother grabbed

her cat, with whom she was closely bonded. However, the cat was in the heat of battle and didn’t know it was his companion that grabbed him, and he slashed her arm, hitting an artery.

CCL’s father had to rush her mother to the Emergency Room to have the wound tended to. A good lesson — Do not try to pick up an aggressive cat.

Cats can often have fights over territory. To defuse these fights, provide high places for them to climb, plus plenty of hiding spots. Each cat should have their own food bowl. Keep one litter box for each cat and one extra.

Often a cat who is bored will ambush toes or ankles or perhaps leap onto the shoulders of some unsuspecting person. Find ways to distract the cat, such as tossing a ball for him to chase.

We have a toy box on our living room floor that we can access at any time to find some toy that amuses us.

If a kitten or young cat is being playfully aggressive toward you, don’t encourage it. Simply get up and leave. The grown cat, having learned that behavior, may do considerable damage to you with his “play.”

Sometimes a scared cat will be aggressive. Any number of changes in his environment or routine can trigger stress and fear.

If the cat is not used to new people, he can be terrified of strangers. Make sure kitty has a safe hiding place.

CCL says when she first brought Pogo home, he spent a lot of time under the bed. It took her a couple of weeks of coaxing to convince him he could sleep on top of the bed.

You might invite friends who like cats over for short visits. Let them know your cat is fearful, and give the cat the chance to get to know them slowly.

Perhaps they can sit on the floor, so they appear smaller. They might give the cat some favorite treats, or toss a favorite toy. Never try to force the cat to interact, but let him set the pace.

If your usually calm cat suddenly exhibits extremely aggressive behavior, it might be because he is in pain. Take the cat to your vet. Be careful handling him. Wear a jacket and gloves, and wrap the cat in a blanket to pick him up.

If you are confronted with an aggressive cat, move away calmly and quietly. Ignore him until he calms down.

CCL tells a story about Laretta, a Kodiak cat. CCL’s office was upstairs. At the top of a steep stairway, there was a landing, with a door to her office on one side and a door to an apartment on the other

The people in the apartment had two cats One was placid and gentle, but the other was a bit more of an extrovert, and she liked the CCL. 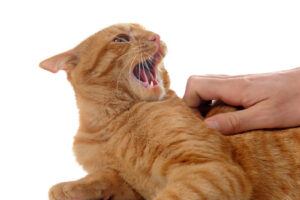 Often the apartment door would be open, and when the CCL arrived at her office, Laretta would come out to meet her. She had lots to say. She’d tell the CCL about her whole day, while she waited for the office door to be unlocked. Then, still talking, she’d come in, explore the whole room as if she hadn’t seen it just yesterday, and then find a cozy place to curl up and sleep.

She really seemed to like the CCL, but touching her was not allowed. If the CCL tried to pet her, she would be bitten immediately. Look but don’t touch.

CCL thinks perhaps she just had very sensitive skin. Sometimes cats do not like to be petted because it is actually painful to them when their fur is stroked.

Who knows? She wanted friendship without the fuss, I guess.

I must have had a sheltered life. The one thing that brings out the aggression in me is if a strange cat enters my territory without my permission. Then I might have to show that cat who is the resident here.

Whew! I found lots of information in Wendy’s book on this one — hope you have a chance to read it or to get a copy.

Please do make comments or ask questions. CCL and I will be happy to answer.