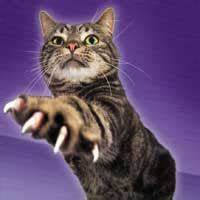 Hello, two-legged readers!  Lucinda the literate cat comes with a different kind of column this week.  My CCL (Cantankerous Cat Lady) found an article online that listed the 10 most common cat behavior problems. Because of length and time available, we will include five of these behaviors in this post, and will do 5 next time.

I will give you my cat’s-eye view of each one.  Here we go:

There are several reasons why a cat might avoid the litter box.  To solve the problem, you must first figure out why the cat has adopted such a behavior.

The most common reason is that the box is not clean.  We cats are fastidious when it comes to our toilet habits, and if our box is very dirty, we don’t want to set paw into it.  We will find a place which we feel is more appropriate, and do our business there.

Bare floors are not a popular choice. After using the floor, we might leave a big puddle of pee that we could walk through and make into a big mess.  If, instead, we use a rug, it will sink in to the fabric and will not be so bad if we accidentally step in it. I don’t know why you two-leggeds don’t understand this.

There are other reasons besides a dirty box that will cause a cat to use something other than his personal commode.  He might be sick, or in pain.  For example, if you were cruel enough to cut off his claws, it very possibly could hurt his feet too much to scratch in the box.

If this is the problem with your cat, you deserve to have to clean up that mess.  You are the reason he will not use the box in the first place.  It hurts to scratch that dirt!  Now, I could understand his not 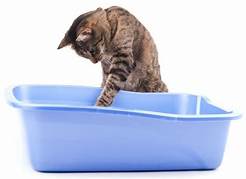 using the box in such a case, and feel this behavior is justified.

You’d better check with the vet early on if you think the cat could have a UTI (urinary tract infection).  If this is the problem, it could also lead to pain whenever he urinates, and will surely get him to try a spot outside the box.  He associates the pain with the box, not with his own body.

Also, don’t use a covered box.  My cousin cat, Pogo, would not use a covered box and would choose another spot that he thought was suitable outside the box. When CCL gave him a box with no cover, he was fine…problem solved.

There are enough issues regarding the litter box that we might have to do another post on it later,  For now, I hope the short list will be helpful.

These behaviors have nothing to do with the litter box.  Instead, they have to do with cat communication.  Usually these messages are for other cats.  Your kitty can publish a whole newspaper with his urine spray…it’s much less expensive and already included with the cat, so he does not need ink.

This marking is done about 8 inches off the floor on a vertical surface.  The target for the spray needs to be in a prominent location where the cat feels another cat might find the message.

A warning:  If your cat sprays, you’d better put something in front of your electrical outlets.  If the cat sprays into these, he could start a fire.  If I could teach all cats to read, I could write some cat lesson books that might help to avoid these behaviors and stop any fire before it starts. 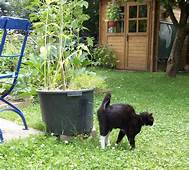 There are several reasons why a cat will spray.  Here are some of them:

Did you realize we cats were so sensitive?  We are perhaps more aware of nuances in our environment than you gave us credit for, and because we recognize changes, we respond, not always in a way you care for.

We cats do not adopt these behaviors because we feel the need to “get even” with our two-legged partner.  Instead, we have a more practical way to deal with a problem we have in a manner that makes sense to us.

I hear two-leggeds talking about how cats can be so destructive — peeing on rugs or furniture; sharpening claws on the upholstery.  It’s all a matter of value.  You value those things because of something called money.  You seem to strive anxiously to gain it and then you exchange it for things.

Cats, including me, cannot understand the value you place on this elusive money.  It doesn’t matter to us that you had to exchange a lot of it to get that new leather sofa (Oh, such a delightful place to scratch!) because we do not use money in our lives and see no need for it.

So,why do you go to such lengths to gain it and then exchange it for objects that you must protect from harm at all times?  Your whole system seems fake to me — why work so hard to protect something that isn’t even alive?  Sometimes you two-leggeds treat these objects far better than you do living creatures.  What kind of value system is that?

Ah, an issue near and dear to my heart!  You do know, don’t you, that we must scratch?  Whether your cat needs to defend herself from an enemy or not, she still needs to scratch.

When I scratch, it’s for several reasons.  Perhaps I just woke up and stretched, and now need to flex my paws against something.  It’s part of the morning routine.

I find a good scratch can calm me and relax me, or I might scratch out of boredom.  Sometimes I just want to play.  I do also scratch to help hone my claws to perfection.  Here are some benefits I gain from scratching:

Please realize that our scratching is not aimed at you in any way — it’s fulfilling our personal needs.  It’s like your going to the gym, the manicure salon, and the therapist all at the same time.

Where we have a built-in system to take care of these issues, you have to use more of that stuff called money to get the job done.  Now, tell me — don’t you think our system is much simpler?

A kitten or a young cat loves to play, and will often become rather aggressive.  It is not meant as misbehavior, and isn’t usually accompanied by growls, spits, and hisses.

However, to avoid the problem of a cat who plays too rough when he’s grown, do not encourage him in this behavior when he is little. 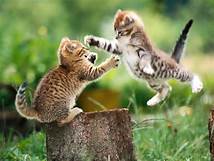 It’s fine for him to rough-house with siblings or best friends, but they, being cats, know their limits when playing together.  They might see you as another playmate, but if their play directed towards you becomes so rough it is uncomfortable to you, walk away. Then you can no longer be the target.  Don’t yell at the cat — it is not intending harm.  Playing is very good for him, so he should not be yelled at.  He’s only doing what comes naturally.

Your cat could have a disorder that causes him to engage in certain repetitive behaviors for no good reason.  These behaviors are generally abnormal, repetitive and exaggerated.  Here are examples:

This one CCL has written about, as Pogo developed alopecia, or overgrooming, in the shelter.

Obsessive sucking, licking, or chewing on a fabric

CCL’s Uptight Cat in Kodiak had a thing about washing beards.  He would get on top of the refrigerator when our bearded friend stood next to it.  Uptight Cat would wash that beard for as long as our friend stood there and permitted it. This beard-washing was a regular occurrence.

Oh, my goodness — I’d never allow harm to come to my beautiful tail! 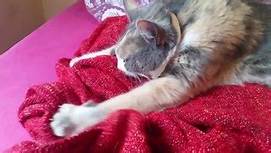 This one is also called rippling skin syndrome.  It’s a condition I’d never heard of.  I’m glad that my skin doesn’t roll around.  I don’t think I’d like the sensation.

CCL gave me her favorite reference to read to learn about these conditions.  It was written by Wendy Christensen, who is the secretary of the Cat Writer’s Association.  Her book is called “Outsmarting Cats.”

I feel very fortunate to have been allowed to read this reference, as it contains all the secrets my CCL ha learned about us cats. Now I will know what she has already found out about us.  No more secrets!

It is so interesting to observe what activities of ours you are trying to understand.  It reminds me of the enormous difference between us, and is heart-warming to know you try to figure  us out.

We, too, have a bit of difficulty with your strange ways.  If you could just try to put yourselves in our paws when you have trouble knowing why we do something, perhaps it would help.

I do hope these columns on cat behavior will be helpful, as we work to improve our understanding of each other.