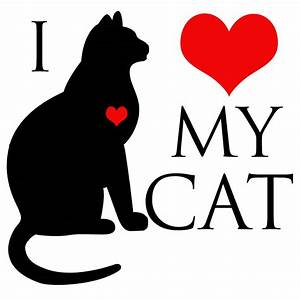 On April 15, 2020, my shelter cat, Pogo, and I celebrated our first anniversary of home-sharing. It’s been a rewarding year for both of us.

I don’t know Pogo’s exact age, but he is close to his 16th birthday. I’ve known him for several years.

I often spent some nights at his former home, and when I did, he always slept with me. So, it wasn’t like we were starting from the beginning of things. We just enhanced things by moving in together.

He’d been in the shelter for 7 1/2 months. When I brought him home, he was in sad shape, as I’ve mentioned in another post. However, it’s amazing what a year can do.

Now his stomach fur has all grown back, and even on his ears. His whiskers are now proud and straight, instead of drooping and limp. I believe they are a bit longer.

His snoring is all but gone. He no longer limps or moves slowly — he even runs again. His arthritis doesn’t seem to be bothering him. He still has bad days, but not too many. CBD oil has been quite helpful for his pain.

At first, Pogo was very clingy, especially at night. He wanted to sleep plastered against some part of me. It took him three months to feel comfortable enough to sleep on the second pillow, instead of sharing mine.

I have seen signs of aging over this year. Once he began to feel better, he was playing with toys and occasionally careening around the house. He moves more slowly now, though not painfully. He’s just obviously getting older.

When he first started feeling better, he established a time for himself in the evening after I’d gone to bed. He’d race around the house, leaving small rugs in a heap.

He’d gallop across the top of the pillows, just above my head, for some unknown reason. It amused him, I guess. Very often this pillow run would involve his jumping over my head. Fortunately, he never missed, or I’d have had cat on face.

After this period of furious activity, he’d come to bed. He still does the night-time race, but not as often or as long. When he does, it always makes me smile.

Being freed from his “cat prison” made Pogo very happy. The first day I brought him home, he followed me around all day. If I’d stop or sit, he’d sit down next to me and purr. It was a sweet way to say “thank you.” I think the quiet of my house pleased Pogo as much as anything. No barking, howling dogs to listen to night and day. He loved the quiet.

During those first few months, I think he’d start dreaming he was back in the shelter, because he’d start washing and biting at his

tummy, though he wasn’t fully awake. I’d stroke him and talk to him with a soothing voice, and soon he’d settle back into sleep.

This behavior went on for some time, but he seems to be pretty much over it now.

The cat and I try to understand each other’s communication. For example, he’ll come in to my office where I’m at the computer, and meow at me. I’ll say, “Show me what you want, Pogo.”

Sometimes he wants out on the porch for a breath of fresh air, but what he usually wants is to lure me into the bedroom. Then he’ll jump on the bed and wait for me to join him. I might, for a few minutes. I think he would be extremely happy if I’d sleep with him all day.

When I first brought him home, I’d let him sleep all night under the covers. That ended soon, though, because he liked to sleep with his head on my outstretched arm and his paws up on the pillow. My arm would go to sleep, so we had to abolish that practice.

Instead, I started a custom that both of us love. I call it “cuddly cat.” Right after lunch, I throw a blanket on the bed and call, “Cuddly cat!” Often he’s already waiting on the chair next to the bed.

Pogo and I crawl under the blanket, and for the next hour we “cuddle” together. Very often, when the hour is up, I can slip out of the bed and leave him covered up. Then he’ll sleep there all afternoon.

I know the year has been helpful for him, but it has been satisfying for me, too. It’s added to my chores a bit, but I don’t mind. The companionship makes it all worth it.

Just to have someone in the house with me; someone to talk to, even if he doesn’t talk back; someone to interact with and to share affection with — all these things are valuable to me, as I live alone.

After all, I’m not alone any more. What a difference that makes! He is loving and caring, and brings me a great deal of happiness and comfort.

I wrote a post while visiting Garberville, CA, about cats who lived there. One lady in her 90s said she had to keep on living because 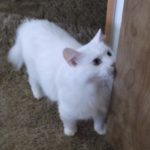 her cat needed her. I do believe a sweet kitty can lengthen our lives. They help remove stress and give us a creature outside ourselves to care for. It’s been shown they help lower blood pressure.

My kitty’s purr is soothing, and his fur is so soft. What pleasure just to stroke him! Pogo, you give me pleasure every day, and I am so glad we share this home. That purr helps me as well as the cat, as it relaxes me and gets me ready for sleep. A purr is a force for good for both of us.

In return for his rescue from “cat prison,” my cat has given me unconditional love. He has more than rewarded me for my time, expense, and any inconvenience. He gives back just by being himself, and I am well-pleased to share my life and home with him.