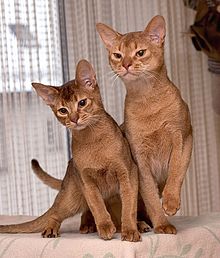 To learn more about Abyssinian and Somali cats, read this post. Abyssinians are one of the oldest breed of cats. These striking and athletic cats are different from any other short-haired cat. Today it is one of the most popular breeds, especially in North America. Both the Abyssinian and the Somali are unique because they have a single mutant coat pattern gene not found in any other breed,

The Abyssinian is related to the tabby, and this relationship gives Abyssinians and Somalis their unique ticked coat. Each hair of this ticked coat has two or more dark band. In the case of the Somali, there may be as many as a dozen of these. Tabby marks can also be found on the head and sometimes on the tail or legs.

These cats have a unique body shape. They are long, lean, and powerful. The shape is definitely a characteristic.

Abyssinians’ origins are obscure. Some say that the breed can be traced directly back to Egypt. There is certainly a striking resemblance in body shape to the cats worshiped by the Egyptians.

A cat called Zula was taken from Abyssinia to Britain in the 1860s at the end of the Abyssinian War. This cat and possibly other 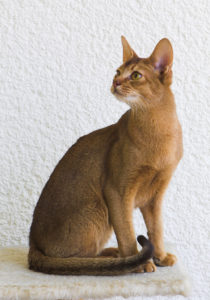 Besides being called Abyssinians, at first these cats had other names, such as Hare Cat, Rabbit Cat, and Bunny Cat. They first had these names because their coat is very similar to that of a wild hare or rabbit.

Abyssinians are very popular as pets because they have a very alert, lively appearance. They are medium in size, but do not have the extremes of physical or psychological traits common to many other foreign breeds.

Judges at shows look for an absence of barring on the legs, chest and tail, but do like to see dark coloring up the body on the hind legs, on the tip of the tail, and around the eyes. Ear tufts are considered a desirable attribute.

White spots were considered faults. Some of the early Abyssinians were probably silvers, a color that became almost extinct until recently. These beautiful silver Abyssinians are coming back, thanks to the efforts of a few British breeders.

During World War I, food shortages and other problems almost wiped out the breed. After a great recovery, numbers were lowered again during World War II. However, in 1917 the first Abyssinian was registered with the Cat Fancy Association in North America.

In the 1930s, the export from Britain to the United States contained several top quality cats. These formed the basis for the breed’s present-day American popularity. The breed was already established in Europe, being recognized in France in 1929. 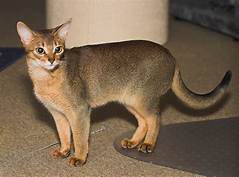 In the 1960s and 70s, the feline leukemia virus decimated the British stock of Abyssinians. Some breeders imported cats from other European countries where the virus had not gained a hold.

Though very similar, Abyssinians are judged by different standards in Europe and in North America. Both locations specify that the head should have a moderately foreign head shape far less elongated than in the Siamese.

American Abyssinians tend to have a slightly shorter, more rounded profile than the European one. Ears are large and pointed, often with characteristic tufts. The ears are set in such a way as to appear that the cat is listening attentively. In fact, the whole cat appears alert and athletic. He is a great tree climber when he gets a chance.

These cats are gentle and affectionate to humans, though they don’t like living with a large group of cats. They are ideal companions. Their voice is quiet, even when they are in heat. Average litter size is about four.

The kittens are born with a fluffy coat that has dark markings. These markings disappear with maturity. They develop more slowly than other breeds. The Somali develops even more slowly.

The standard coloring for the Abyssinian is termed “ruddy” in North America. It is a rich golden brown ticked with black. Hairs show 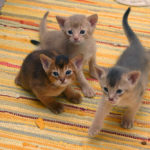 Because the red is not a true red, alternative names have been proposed. These include cinnamon, russet, and sorrel. The name sorrel has already been used by some North American associations.

The Somali looks exactly like the Abyssinian except for the coat. It is not exceptionally long, but long enough to show many bands of ticking.

For a long time, breeders wishing to get recognition for Somalis were hampered by the belief that, to get a long-haired Somali, some out-crossing to long-haired breeds must have taken place. However, it has been shown that certain breeding lines of Abyssinians have carried the recessive long-haired gene for many generations. 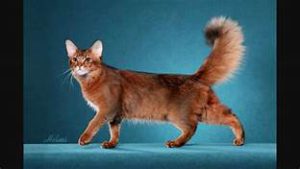 In the late 1960s breeders set out to develop a long-haired Abyssinian, under the name of Somali. Now this cat has championship status in all North American associations.

Meanwhile, European Somalis began to be developed. Some Somalis were imported from the United States to Germany in 1977. Other breeders were trying to establish the breed independently, and, in fact, a Somali was exhibited in Australia as early as 1965.

The Somali has the same ticked coat as does the Abyssinian. However, it is silkier, softer and much longer. Sometimes there are as many as 10 to 12 bands of color on each hair, and the coat is a deeper, richer shade. The coat is full without being woolly, and is easy to groom. It takes up to 18 months for a kitten’s coat to be fully established.

Since long hair is a recessive trait, Somalis always breed true for long hair, giving them a plushier coat than the Abyssinian. Mated together, the kittens will be both long-haired and short-haired, at the ratio of one to three. 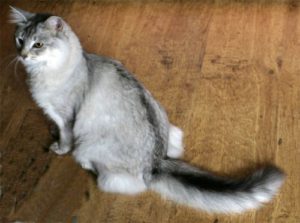 With their somewhat shaggy coat, exaggerated ear tufts and tail full like a fox’s, the Somali cat has a wild look to it. Yet it is gentle in nature, like the Abyssinian. It is soft-voiced and friendly. It is also vigorous and energetic. Unfortunately, litters are small — only three or four — and it is hard to find enough Somalis to satisfy the demand.

2 thoughts on “Learn About Abyssinian and Somali Cats”