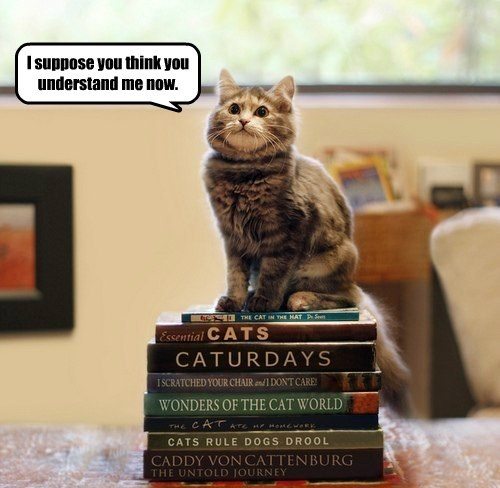 Though your cat cannot talk to you, he does have his own form of communication. When you have had your cat for a while, you may come to understand what idea he is trying to convey. Kitty uses his body to do his talking for him, and if you learn how to read your cat’s body language, you’ll progress rapidly on the road to true communication.

Let’s take a look at the different parts of his body that the cat uses to express himself, and see if we can discern what message he might give. We will look at ears, eyes, body, and tail to learn what messages they can leave us.

We’ll start at the top of the cat, with his ears. Pay attention to the position of kitty’s ears, because they can tell you something about the cat’s mood.

Relaxed, a cat’s ears will be forward or straight up. Forward ears denote contentment or perhaps playfulness. Straight up ears indicate alertness. Both cat and ears stand at attention.

Carlos, a very social cat, would sit with his back to us when we sat and conversed. He held his ears straight up while we talked. He seemed to be listening to every word we said. Has your cat ever “listened” to your conversations in this way?

If the ears are pulled back, kitty might have some skepticism about his current situation, or perhaps he doesn’t know what to make of it. He may feel a little frightened by what is going on.

Now, if those ears are pulled back and flat against his head, kitty is either angry or very frightened. If you can, try to find a way to defuse the situation.

When your cat relaxes, his pupils will be at their typical size — not dilated or constricted. When relaxed, kitty may close his eyes half-way, as if starting to doze.

Dilated pupils occur when your cat feels stressed or fearful. They could also indicate surprise.

Sometimes it’s hard to tell with eyes, because they will dilate or constrict depending on the light quality around them.

Unless the light causes it, constricted pupils could mean the cat is tense and perhaps feeling aggressive.

Eyes in little slits can also mean your kitty is focused and alert.

You should not stare at kitty, because the cat may see a stare as a challenge. On the opposite end of this eye behavior: If kitty does a slow blink, you can tell he feels safe and comfortable and trusts you. It’s a way he can express kitty love.

Try to learn the meaning of all the different ways your cat uses his body to communicate, because it will help you to better understand his needs and moods.

The cat’s tail communicates many things. If kitty holds his tail straight up in the air, he expresses happiness and would most likely let you pet him or interact with him in some way.

A tail that hangs down may indicate a scared or threatened cat. If the tail moves slowly back and forth, the cat tries to make up his mind about something. When Carlos’s tail moved in such a way, I felt that he wanted to think over the situation.

On the other hand, if the tail whips back and forth, you’d best stand back and leave him alone. He has some reason why he is agitated.

When the cat carries his tail tucked under his body, this indicates fear. If you and the cat walk outdoors, it might be a good time to take kitty home.

Raised hair can also be considered a kind of communication. With that hair standing on end, kitty wants to make himself look bigger, so he can perhaps frighten off whatever threatens him.

My favorite memory of such a situation: Due to creek water rising and threatening our home, I had to take the cats and go into town to a motel for the night. Loose cat, not used to staying behind a closed door, ran out as I brought in our belongings. He raced down the sidewalk in front of the motel, me right behind him.

At the end of the row of cabins, the sidewalk took a sharp left turn. In the corner created by that turn slept a German shepherd dog. When Loose Cat came to that corner and saw that dog, he shot up in the air a good three feet, and when he came down, he was three sizes larger than when he went up.

The dog took one look at this creature from outer space and took off across the yard at a gallop, disappearing from view. I got Loose Cat calmed down and we went back to the room.

When a cat shows his belly, he exudes comfort. He feels safe, as that stomach represents a most vulnerable spot on his body. Use caution if you reach down to stroke that tempting tummy, because you may find your arm gripped with four paws, while the cat bites the hand that feeds him.

Carlos had such a tempting tummy, and he would try this technique with me. I kept an oven mitt in his toy box, so I could put it on and let him attack that mitt enthusiastically. We enjoyed the game.

You will find your cat shows affection in many ways. He may rub against your legs, lick you, curl up against you to nap, or do that roll onto his back, showing the wonderful tummy.

He may lay his head against your neck or forehead, or give you nose kisses. He might also nibble without hurting.

As you must know, a cat meows to humans to try to help them get a message. They observe that we communicate vocally, so they add a meow or two to the conversation when they want something from you.

The cat makes this cute sound at either wildlife or people. Often if a cat sees a bird outside, he will chirp. This could mean that he has stepped into hunting mode, or it might indicate curiosity or contentment.

When our neighbor cat in Kodiak, Tiger, injured his leg when a dog attacked him, he couldn’t hunt. He’d come over to our house and visit with Carlos. My hero cat, knowing Tiger couldn’t go out hunting with him, would bring in mice or voles and give them to Tiger. When he did, he’d make that little chirping sound to Tiger…” Here — this is for you.”

Of course, if the cat hisses or growls, you will know he is fearful, defensive, or unhappy. Know that you must take care in such a case, as the cat could transfer his aggression to you.

If you want to find out how to communicate with your cat, learn the meanings of these bodily signs, and you will have a much clearer idea of what goes on in that furry kitty head.

His body language takes the place of speech for him, so you will learn a great deal about your kitty if you know how to read these signs.

One reference I used for this post (pawsdoc.com) has an excellent chart showing cat body communication. You might want to copy it and run it off to give you a visual reminder.

These are the references I used for this post:

2 thoughts on “How To Read Your Cat’s Body Language”