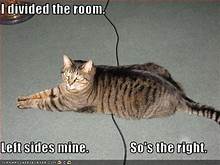 Have you had to cope with an aggressive cat? Aggressive behavior is a common problem among cat owners; an aggressive cat can be formidable. Though cats do not pursue people to bite them as a dog might, they can still inflict damage with their clawed feet and their teeth.

Cat bites can create severe lacerations, which can be painful and easily infected. Such wounds can also cause cat scratch fever, a potentially serious infectious disease that causes flu-like symptoms

Aggression, or threatening or harmful behavior, may be directed toward a human, another cat, or other animals. In wild animals, this behavior is displayed to guard territories, defend offspring, or to defend themselves.

If you learn to understand your cat’s body language, you can more accurately “read” your cat to understand their feelings and motivations. This understanding will help you respond much more effectively to such behavioral issues.

How Can A Cat’s Body Language Be Of Help?

You can tell from the cat’s posture if they are exhibiting an aggressive behavior, and if so, you must never touch, attempt to reassure, or punish a cat showing these postures:

A cat’s defensive postures include the following:

What Is Your First Impulse When You Hear A Cat-fight Starting?

You might rush to the scene and try to break it up. If it is between two cats in the same household, it may be just an expression of surprise or annoyance, or an elaborate bluff.

You may be able to keep the cats from actually attacking each other by providing a distraction. Do not try to pick your cat up, as he is so highly stimulated that he may turn his attack toward you.

1) Instead, toss a toy or a treat past him, or, if he recognizes the sound, rattle the treat bag.

2) Try to interest one or both cats in some vigorous play, transforming their aggression so that they target it at the toy and not each other. Try to separate them by using the toy to keep them away from each other.

3) If that doesn’t work, make a loud sound, such as a yell, or clapping your hands together. Keep a whistle or air horn handy to use to distract them.

4) Try fanning them with something like a magazine. The cool air may distract the cat. 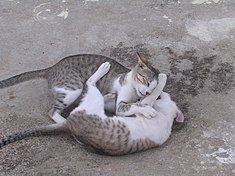 5) Toss a blanket over one of them. If they are wrapped together, use a soft pillow or pour a cup of water over them. This may separate them temporarily. Use this separation as a chance to isolate one cat, giving the other a chance to flee.

6) If your cat is fighting with a feral or strange cat, turn on the garden hose and douse both animals. Then get your cat indoors as quickly as possible.

When evaluating why your cat is aggressive, you may find it necessary to consult a vet, especially if the problem is ongoing. There are a number of medical conditions that can cause or contribute to your cat’s aggressive behavior, and it is a good idea to rule these out.

If his aggression does not arise from a physical cause, think about the purpose or the function of the aggression. Think like a cat — consider all the reasons why he may behave aggressively. Then you can figure out what motivates your cat and what he might gain from this behavior.

What Factors Cause Cat’s Aggressive Behavior?

The most obvious type of aggression between cats occurs between unneutered males. They will often challenge each other for access to mates on their territory.

With luck, which such an encounter, one cat will slowly leave. Or, on the other hand, they might attack.

If the cat is part of your household aggression will be more subtle, and, in fact, you might not notice it. Such aggression can be related to size, as larger cats will sometimes try to intimidate a smaller animal.

It could be the result of a lack of pleasant social experience with other cats. It also could be caused by something the cat finds unpleasant, such as fireworks or thunder. It could be because of a personality clash.

If a cat perceives a threat and can’t escape, he could react with aggression. It is often best just to 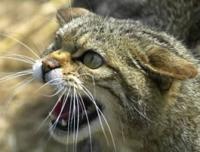 leave the defensively aggressive cat alone until he calms down.

Cats are very territorial. Such aggression is usually directed toward other cats, but it could also be directed at dogs and people.

This aggression could be triggered by many factors. Perhaps a new kitten in the household reaches sexual maturity. Maybe you introduced a new cat into the family. Moving is stressful for people and cats. Also, a new person moving in can be stressful. Other cats entering your cat’s territory can be a factor.

Kittens and young cats less than two years old often play rough, as it is the way they learn about hunting and capturing their prey. If the cat directs this “play” toward people, it can turn into a painful problem.

It’s best not to encourage cats to chase and attack your hands and feet, as you could end up being harmed.

If a kitten is weaned too early, it may not have learned to temper rough play into something less damaging. Also, if the cat is left alone for long hours, he may tend to play aggressively.

The cat can be aggressively agitated by an animal or person he can’t get at — perhaps on the other side of a window. Since he can’t get to the cause of his agitation, he may lash out at a person, dog, or other cat who is nearby.

Such aggression can be considerably delayed from the time of the initial agitation. It might be hours later. This reaction might be a reflex action that is done automatically without previous contemplation.

Because of this delayed reaction, it is not a good idea to break up a cat fight or to approach an agitated cat. You may be the victim of the cat’s unpremeditated attack.

Does your cat enjoy being petted, held, or carried? Some cats love it and some merely tolerate it. If a cat becomes irritated at being petted, he may nip or bite lightly. Then he jumps down and runs away.

It is thought that, if stroking is repeated over and over, it can become unpleasant. The repetitive contact can cause arousal, excitement, pain, or perhaps static electricity, and if it becomes unpleasant, the cat will want you to stop.

A mother cat, like many other animals, can be very protective of her young. Maternal aggression can be triggered by anything the mother sees as a threat. For this reason, it’s best not to handle kittens for the first few days after they are born.

If you have a cat with a recurring problem with aggression, you need to see your vet. The vet can take a full history of the animal. Write a list of the circumstances around the onset of the behavior, including the time of day, interaction with other animals and people, sounds and smells.

You might try some Feliway pheromone products, and/or a calming collar. These may help a cat prone to aggressive behavior. Your vet can also suggest some nutritional supplements or a change in diet or prescription. 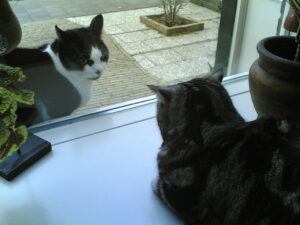 Avoid these techniques: Do not punish your cat, as it may cause the cat to become more aggressive, or it may damage your bond with your cat. Also, do not push your cat beyond his comfort level, as such an action may cause setbacks and interfere with his progress.

Here are some other behavior modifying techniques you can try:

It is important that you try to understand things from your cat’s point of view. If you can learn to read his body language and what things frighten the cat and/or trigger his aggression, you will be much better prepared to deal with the problem.

I used a few references for this article. One I would like to suggest that you try if you have such a problem with your cat is Wendy Christensen’s very informative book. “Outsmarting Cats.” If you would like your own copy, click on the link below. This book comes from Amazon, and if you purchase it, I may receive a small commission.

Outsmarting Cats: How To Persuade The Felines In Your Life To Do What You Want

Other references I used were as follows: