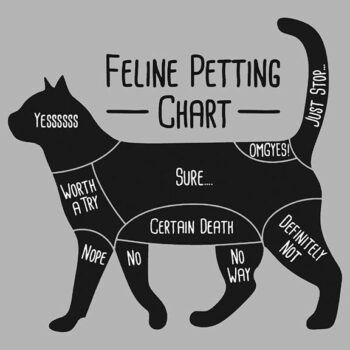 Yes, there is a right way and a wrong way to pet your cat. If you have a new cat companion, you might be asking, “How do cats like to be petted?”

Some months ago, my neighbor brought a visiting friend to meet me. While we stood in the office and chatted, Pogo came out to investigate.

My visitor saw him, and immediately started petting the cat. She used a heavy hand as she stroked, which Pogo did not appreciate. However, being a gentleman cat, he didn’t swat at her or bite her. Instead, he hunkered down close to the ground as if he were a snake, and slithered out from under her hands. Then he left the room.

Fortunately, she didn’t muss his fur back and forth as you might do to a dog, or she might have been bitten.

How Can You Tell If Kitty Wants Petting?

So, how can you tell if your cat wants to be petted? First of all, it’s best to let the cat make the first contact.

If he comes up to you with his tail upright and slightly waving side to side and his ears pointed forward, he might want some attention. Check his body language. Does he have a really relaxed posture? Does his facial expression seem friendly?

Scratch those cute fuzzy cheeks! Most cats prefer for you to pet them where the scent glands are located around his face. Try extending your hand to kitty, and see if he meets it with a pressure from head or cheek. This is called “bunting,” a practice which leaves kitty’s scent and marking you “his,” but it also shows affection.

You can find scent glands between the ears, at the base of the ears, on the cheeks and under the chin. Some cats enjoy gentle scratching near the tail as well.

Pogo sat on a chair next to me when I worked on the computer. If he wanted attention, he’d reach a paw up and tap my arm. That meant I must stop working for long enough to give those soft cheeks a good scratch. Then he’d go back to sleep for a while.

With him, I sensed that excessive petting wasn’t often appreciated. If he had too much, he’d leave abruptly. When I stroked his amazingly soft fur, I do so very gently, and always in the direction the fur grew.

Have you ever noticed that a cat will sometimes lick his fur where you have petted him? He must feel that you have dirtied up that fine cleaning job, so a touch-up is in order.

What Are Signs That Kitty Wants The Petting To Stop?

You can see other signs of tension or dislike if you watch for them. Does kitty shift position or turn the head away? Does he appear passive, with no purring or rubbing? Pay attention to these obvious signs of tension.

Does the cat shake head or body, lick his nose, or engage in some exaggerated blinking? And, yes, those bursts of licking the fur often represent another sign of tension.

Does his skin ripple or twitch, especially along the back? What about the tail? Swishing, thrashing, or thumping the tail are warning signs.

How about the ears? If flattened to the side or rotating backwards, you’d best stop your attention. If you scratch the face and the cat does a sharp sudden turn to face you, or if kitty bites, swipes, or bats your hand away, then leave him alone for a while.

Look at his eyes — Are they dilated?

A cat will tolerate just so much attention, and if he feels it’s enough and you haven’t read the signs, then he might get his point across by becoming aggressive.

You can supply ways that help diffuse anxiety and tension and reduce the cat’s sensitivity. A main technique comes from play. You should play with your cat every day. Actually, a short session proves the better approach, but you can get her engaged and excited with a bit of play. Once calm again, kitty may respond to some affection.

Ten to 15 minutes at a time can fill the need for play, and if you incorporate more than one session per day, that’s even better.

Make sure kitty knows you are involved in play, and you need to think of ways to make that toy seem alive. You need to allow kitty to catch the toy now and then, completing the “kill,” or the cat can become very frustrated.

Very often, when the cat suddenly becomes aggressive, biting or scratching you, you have not paid attention to his body language. He may have tried to warn you, but you ignored the signs.

If he becomes upset, stop the petting and move your face and hands out of kitty’s reach. If you can, find something such as a pillow or a pair of socks to throw at the cat. Then he can direct his aggression to these items, instead of focusing on you.

Kitty’s ancestors (the African wildcat) received consideration originally as mere pest control. In the last 4,000 years, we have witnessed a social shift in the relationship between human and cat. You’d think that after 4,000 years, the cat has had sufficient time to adjust to increased social demands.

However, the genetic divergence from their ancestors has been relatively slight. Thus, the kitty brain profile still retains the same connections as those of a wildcat. They still think like their wild relative, and still retain the same instincts.

Thus, socialization comes slowly. They certainly did not inherit many social skills from the solitary wildcat.

If a cat learns to enjoy petting from his first two to seven weeks. he will more likely accept social interaction with humans. Sometimes cats merely tolerate handling from humans, putting up with it in exchange for needs such as food and lodging. Being a tolerant cat does not necessarily equate with being a happy cat.

If kitty simply tolerates your advances, it becomes important to give the cat space. Restrict how much you handle him, and pay close attention to his behavior and posture when interacting. In this way you ensure he remains comfortable. Very often when it comes to touching the cat, less is more.

Remember, just like humans, each cat is unique and each has his own preference. Learn what these preferences are, and act accordingly.

Remember that kitty considers his belly to be his most vulnerable area, so stroke it with care or your hand may be gripped by four paws, and teeth will penetrate your hand. Pet him in his favorite spots and chances are he will come back for more.

Learn his preferences and respect them. Give him attention when he wants it. You will go a long way if you follow this advice, and you and kitty will both have a happier relationship.