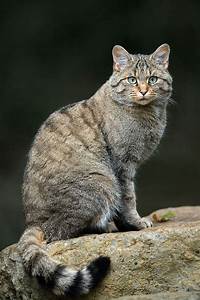 I’m happy to introduce Felix silvestris lybica, the African Wildcat, and a domestic cat ancestor. This animal is a subspecies of F. silvestris, and became a distinct species about 131,000 years ago.

Then, about 10,000 years ago, some of these African Wildcats were domesticated in the Middle East. These early domesticated cats became the ancestors of today’s household felines.

The African Wildcat, also known as the desert cat, can be found in Africa and in the Middle East. They adapt to a variety of habitats, such as steppes, savannahs, and bushland.

This cat is sand-brown to yellow-grey in color, with black stripes on its tail. The fur of the African Wildcat is shorter than that of the European subspecies. Also, it is considerably smaller.

This cat’s hunting skills are formidable, as it has to hunt for all its food. It eats mice, rats, and other small mammals. When available, it will eat birds, reptiles, amphibians, and insects.

Its hunting technique is to approach the prey slowly. It attacks by pouncing upon the prey, as soon as it is within range. Normally, attack distance is about one meter.

The cat is mostly active during night and twilight, as it is a safer time for the animal. If it is approached by a predator, its fur stands on end, making it seem larger, just as domestic cats do when confronted by an enemy.

In the daytime, unless the day is really dark and cloudy, it will find a safe hiding place in nearby bushes, or in some protected area.

It is interesting that the territory of the male wildcat overlaps with that of a few females. These 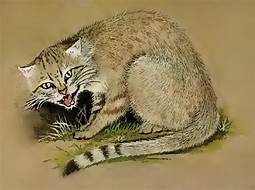 females defend their territory against any intruders.

The female has two to six kittens in a litter, with an average number of three. The kittens are born blind, so need their mother for full care, and stay with her for five to six months. Most kittens are born in the wet season, because there is more food available at this time.

This cat often gives birth to its kittens in burrows or hollows in the ground. Their gestation period is from 56 to 69 days. in six months, when the kittens are ready to leave their mother, the females are already fertile.

The African Wildcat was the wild ancestor that became the first domesticated cat. This important event took place in the Fertile Crescent, about 9,000 years ago.

So what are some traits that our present domestic cat shares with the African Wildcat? They do have many similar characteristics.

As described, the African Wildcat is usually a red-brown to yellow-grey with dark markings that help them blend into their surroundings in both dryer areas and savannahs. Their colors can be lighter or darker, depending on their home environment.

The closest breed comparison in today’s domestic cat in both the color and the pattern are to the Abyssinian and the Mackerel Tabby.

In size, the African Wild Cat is slightly larger than the average domestic cat. They are comparable to the larger breeds of domestic cats like the Abyssinians and Bengals. Because they are so active in the wild, the African Wildcats are lean, muscular, and nearly always in ideal body condition. 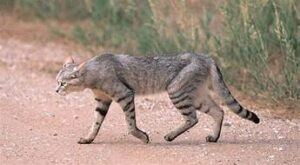 The African Wildcat has long legs, giving an advantage when running, pouncing, or climbing trees. Though domestic cats have shorter legs, they still show similar behaviors. They might chase a bug, pounce on a toy or a mouse, or climb to a tall perch like the top of the refrigerator.

Because both the African Wildcat and the domestic cat need to keep their claws sharp, they find likely places to hone their weapons. Wildcats scratch on trees. Domestic cats need to be provided with good scratching posts to keep them from ruining the furniture.

Both the African Wildcat and the domestic cat have an extra layer of cells in their retinas. These reflect light back into the eye, allowing them great night vision for a nocturnal hunt, or for keeping you awake, as they play in the night.

On both animals, pupils can contract to thin slits in bright daylight, and dilate very wide at night. Thus they can make use of all the light that is available. If a cat is excited, pupils also will dilate.

Whiskers are similar in both wild and domestic animals. Learn the meaning of the positions of the whiskers, as they will vary this position to communicate various images.

Also, with both wild and domestic cats, the whiskers extend the width of the head, so they can be used to measure an opening. If the whiskers will fit, the whole cat will fit.

African Wildcats can open their mouths extremely wide, which helps with their hunting. They use their canine teeth for piercing, tearing, and holding. Their modified molars cut the meat like scissors in to pieces small enough to swallow.

Both domestic and wild cats use their molars in the same way. It’s called side chewing. If you see your cat turn its head to chew, it is to allow him to shear the food with the best teeth for that job. 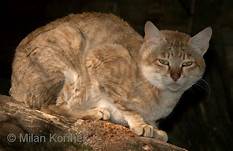 The African Wildcat’s ears are orange in color and shaped into what are called rufus ears. (Named after the bobcat.) Their hearing is highly sensitive. These ears can rotate to sense the direction or movement of both prey and predator.

The domestic cat uses the ears in the same way. If pointed straight up, they are in a relaxed state. If the ears are pointed forward, the animal is friendly or attentive. Fear is the message from ears that are flattened or pointed out slightly to the side.

The tail of the African Wildcat is longer than that of the domestic cat. This added length helps with balance when the cat is climbing or chasing prey.

Both wildcat and domestic cat communicate with the tail. It can indicate many feelings from friendly and submissive to defensive and agitated. Observe your cat’s actions to translate the tail’s meaning.

Though the African Wildcat is certainly not domesticated, it is easy to see the relationship between it and your own sweet pet. It’s a good reminder that the cat has not traveled far from their wild beginnings, and in many ways, they have not changed that much.

Enjoy the bond you have with your own cat. Then realize that, in a sense, you are observing a wild animal who has chosen to leave its primitive beginnings and join you. Be grateful and appreciative that this amazing animal is happy to share your home and your world.

6 thoughts on “Meet The African Wildcat, A Domestic Cat Ancestor”