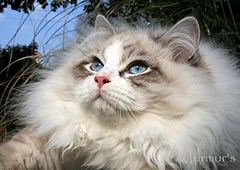 The Siberian Forest cats, their name now shortened to the Siberian cats, have been around for hundreds of years in Russia, and could receive validation as a Russian national treasure. This medium to large cat has an overall appearance of excellent physical condition along with strength and balance.

Many of these cats live in rural Russia where freezing cold winters reign. One area, a farming center near a small Siberian village outside Barnaul, Russia, has become known for its large population of cats.

A local farmer, Alla Lebedeva, now calls her property “Catland.” Alla and her husband, Sergey, started feeding the cats when they realized how efficient these cats were at rodent control and at protecting some of the other farm animals, such as chickens and rabbits, from rats and mice.

When asked how many cats they have, Alla usually answers, “a million, maybe more.” The cats roam free, but they do have three little bedrooms where they can sleep, according to their needs. They share a hen house with the hens.

The little building is stuffed with straw, and if you remember reading the best way to create feral cat shelters, the recommendation is to fill them with straw, as the straw will not get wet, but will provide insulation from the cold.

Perhaps the folks who have commented that these animals should not have to sleep out in the cold did not realize that the cats do have a straw-filled sleeping space. Also, as the cats seem to thrive in the Siberian atmosphere, I’d say not to worry about them. Besides, cats living in the wild don’t sleep indoors. These cats seem quite happy outside.

As the Siberian has been around for centuries, he could well be one of the possible ancestors of all modern long-haired cats. However, ever since the 1980s, the cat has become a formal breed, with all the standards developed for the breed.

This strong and powerful cat can become quite large. Usually they weigh between 17 and 26 pounds.The males are bigger and heavier. They also have strong hind legs and large, rounded paws. These attributes make them excellent jumpers.

The hind legs, being slightly longer, create a slight arch in their back. They have broad heads, with large eyes and ears.

A Great Coat For Cold Weather

From the description of their coat, I would guess that the Siberian cold doesn’t bother them much, as they have the fur to handle it. You might say they wear not one coat, but three. The undercoat, called down hair, is composed of short, flat hairs. These can grow in very thick.

For the intermediate hair, they have a coat which is called awn hairs. These come in longer than the dense hairs of the undercoat, but shorter than the top coat, the guard hair. This layer creates insulation and protects the undercoat.

Guard hair grows longest of the three and forms the outer layer of the coat. The outer ends of these hairs form a visible coat layer. Coat patterns may vary, from tabby, solid, tortoiseshell and color-point.

These cats received their first mention in a book written by Harrison Wier in 1871. For a long time, the cats, native to Russia, became known as a landrace variety, or a domestic cat from the locality that developed naturally over time.

Then, in the 1980s, they became fully recognized as a breed. In 1987, written standards for the cat received publication by the Kotofei Cat Club in Saint Petersburg. Even though the breed’s popularity has grown rapidly, it remains relatively rare in places outside Europe, and the cat mostly comes to us from Russia.

If you like an affectionate and friendly cat, the Siberian might just fill the bill. The cat loves to spend time with children and other pets, being both brave and curious. However, don’t expect to find one at your local pet shop. The current price for a Siberian is $1,000 to $2,000.

Part of the reason for the price is that the breed has not been in the United States for very long. These cats first became introduced in 1990, when Elizabeth Terrel of Starpoint Cattery imported three of them, giving them the names of Kaliostro, Naim, and Ofelia, some unusual names to our ears.

The cat is now gaining popularity, and more cat associations recognize them. The International Cat Association (TICA) accepted them as a new breed in 1992, and raised them to championship status in 1996.

In 2000, the Cat Fanciers Association officially recognized them and moved them up to championship status in 2006.

This cat becomes more real when you can see it, so I’ve included a YouTube video showing some of these beautiful animals. Enjoy watching!

2 thoughts on “Have You Ever Met The Hardy Siberian Forest Cats?”