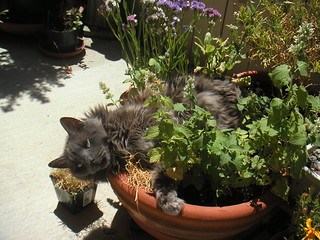 Why do cats roll in catnip? What causes them to become a bit nutty when smelling or ingesting the herb? Do they know something we don’t ? A new study led by Masao Miyazaki at Iwait University in Japan finds that, indeed, they may have other reasons for liking catnip.

Everybody knows that many cats love catnip, as it seems to give them a euphoric high. We often consider it a kind of cat marijuana, and fortunately for them, the use of it will not lead to fines or imprisonment. A friend just brought me a little vial of catnip, called “meowijuana.” Mocha loves it.

This new Japanese study finds that the reaction to catnip and to silver vine, a plant not closely related to catnip, but one eliciting the same response in cats, can create an evolutionary advantage. It may have to do with the release of the bug repellent effect of iridoids, the chemicals in the plant that induce the high.

This study was based on previous work, which found that cats tried their best to coat themselves in the plant’s iridoids, either by rolling in them or by nuzzling them with their cheeks. This behavior could indicate that the cat may benefit physically by placing the compounds on their bodies.

Not only does kitty get an enjoyable high, but he also protects himself from blood-sucking insects. The scientists found that the amount of iridoids released by the plant increased by more than 2,000% when the cat damaged the plant.

Nepetalactone As A Bug Repellant

Dr. Marco Gallio, a neurobiologist at Northwestern University, published a report last year. This one linked the primary bug repellent in catnip, nepetalactone, to a receptor protein with the intent of triggering irritations in mosquitoes and related insects.

Thus, besides the high, kitty could well be staving off mosquitoes and flies. Such “self-anointing” can happen among other species, so it is not as far-fetched as it might seem.

Catnip, or Nepeta cataria has long been associated with cats. The Latin-derived name, cataria, means “of a cat.” We find that many cats, big and small, become ardent fans of this weedy member of the mint family. Green leaves and a stalk of purple blossoms make for an attractive plant.

Not all cats are sensitive to the weed, though. Statistics show that between 67% and 80% of adult cats have a sensitivity to the plant. With a kitten, you can’t tell if the weed affects him until sometime between the age of three to six months.

The appeal comes from its volatile oil, specifically the chemical nepetalactone. This chemical can be found in the leaves, stems, and seeds. If you have a susceptible kitty, it will only take a few sniffs to have the cat acting silly and rolling in kitty bliss.

This “high” only lasts about 10 minutes for most cats. The cat may become mellow and calm or may erupt into aggressive playfulness. Once the “high” recedes, it will take a couple of hours before the cat will again respond to the catnip.

If you wish, you can grow your own for kitty in a sunny window. In fact, grow some wheat, oat, rye, or barley grass in separate containers, providing kitty with his very own garden.

The potency of the catnip may quickly dissipate, so if you buy dried catnip, store it in the freezer to keep it fresher.

Interesting, that the volatile oils in the catnip only affect cats through their noses. They don’t sense it with their Jacobson’s organ, aka the vomeronasal organ, located on the roof of their mouth. Only the nose knows.

Besides perhaps having the effect of driving off mosquitoes and other insects, the cat will feel euphoric. Know, though, that catnip is safe, impossible to overdose, and non-addictive. That’s about as healthy as a drug can get.

When eaten, the herb can help a stressed-out cat to relax and feel calmer. When inhaled, the active components encourage your cat to play. This play in itself becomes a powerful stress reliever.

Use catnip as a gentle method to provide an alternative way to redirect behavior. For example, sprinkle on a new scratching post or bed to encourage kitty to use these objects instead of less appropriate places.

When serving catnip to your kitty, scrunch up the plant; crumble it with your fingers so the chemicals can be released for the strongest effect. For a spray, you need no special preparation — just apply to the chosen area.

If you want potency, fresh catnip has proven to be more potent than dried. Thus, you won’t need as much. Try growing your own plants — being of the mint family, they will grow easily. If you don’t want to grow your own and can’t find a fresh source, get it dried. Just remember to store in the freezer to retain potency.

If your cat’s tummy gets upset from ingesting the live plant, try the catnip spray, and put it on a favorite toy or on his cat tree or scratching post. You can also roll a toy in it.

I grew catnip for my cats in Kodiak. I allowed Uptight Cat only a few leaves. If he could get to the whole plant, he would eat it to the ground. Loose Cat, much mellower, would eat just a couple of leaves and then go into a meatloaf pose and become catatonic for a while.

On Spruce Island, I used to sprinkle catnip in a round cake-baking dish for Sam Cat. Sam would try his best to roll in that pan, but he didn’t fit. He did love the stuff, nonetheless.

It is very possible that you can make your cat happy with a bit of catnip. Perhaps you also will be helping him to avoid bites from blood-sucking insects. In any case, if he is a cat that reacts to catnip, he will be happy you supplied him with his kitty drug of choice.

Enjoy watching his antics, and the catnip will give both of you pleasure.

Here is a video you can enjoy about cats and catnip.

3 thoughts on “Why Do Cats Roll In Catnip? You Might Be Surprised”