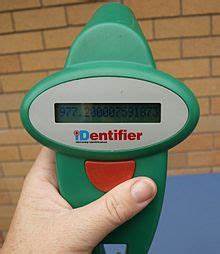 Do you remember reading about the thousands of pets left stranded after Hurricane Katrina, and, sadly, separated from their owners? It is unfortunate that those pets did not have a microchip, because many more could have been returned to their families.

Do you know that more than three million cats and dogs are euthanized at animal shelters in the United States each year? What if you lost your pet during a disaster? Would you know where to look for him?

Microchipping is providing an answer to this sad problem. These chips in theory provide a permanent identification method for pets, so the owner can be located.

A veterinarian can implant the microchip, which is no bigger than a grain of rice, into all kinds of

pets. There is a number on the device, and when this number is plugged into the correct database, it will reveal the name and contact number of the pet’s owner.

In Europe, about 1/4 of all pets have a microchip implant. However, in the United States, only about 5% of all the dogs and cats are microchipped. Perhaps it is time we worked to increase the number.

How Does The Microchip Work?

A pet microchip uses radio frequency identification technique (RFID). Radio waves become the medium to transmit information. The RFID tag stores data. By using electromagnetic forces for power, the tag can communicate the stored data to a device that interprets it.

The passive RFID tag used for pets has no battery and no internal power source. It is simply inert in the animal until it is read.

The capsule, the size of a grain of rice, has several components. It is enclosed in a glass material that is non-toxic and doesn’t hurt the animal’s body. Thus, your pet will not experience an allergic reaction to the device once it is in place.

Some microchips also include a polypropylene polymer cap that keeps the chip from moving around inside the animal. The purpose of the polymer is to encourage connecting tissue or other kinds of cells to form around the capsule, holding it in place. The microchip is good for the life of the pet.

As there is no internal power source, the microchip needs a reader or scanner to energize it. Microchip manufacturers often donate scanners to shelters.

When the scanner is set to the right frequency, it energizes the microchip capsule and radio signals are sent back to the scanner with the identification number.

Implanting the microchip is not a painful procedure. The vet uses a hypodermic needle for the implant. The pet will feel the needle, but it is about the equivalent to that received from a routine shot. Such pain is minimal compared to the consequences of the pet getting lost.

The cost of this process is quite reasonable. Though the price may vary from vet to vet, typically it runs between $25 and $65, plus registration fees.

You must register the microchip number with an agency, as it is the only way the pet’s unique identification number can be matched to your name and contact number. 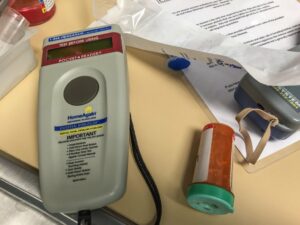 When you register, you provide the pet’s microchip identification number as well as your contact information. When a lost pet is found, a shelter uses scanners to read the number. Then they contact the agency that manages the database. The agency contacts you with the good news that your pet has been found.

Be sure to notify the agency handling your database if you move or get a new phone number or email address.

Be aware that not all microchip companies use the same database. American Veterinary Identification Devices (AVID) uses PET trac. Home Again operates its own database system.

The system is not perfect, as multiple databases cause problems when shelter employees have to figure out which database has your pet’s information.

There are plans from the American Microchip Advisory Council for Animals (AMACA) to work out a way to make this process more efficient. The organization plans to create an “umbrella database” that will coordinate existing databases. This change should be very helpful, as shelters then only need to communicate with one place to get the needed information.

Microchip Companies Use More Than One Frequency

A problem has arisen because pet microchips come with different frequencies. In the United States, about 98% of the pet microchips use 125 kHz, while in Europe the frequency is 134.2.

Thus, if a pet in the United States has a microchip using the 134.2 frequency, there is a difficulty. Most animal shelters do not have scanners that will read this frequency. Tragedies have occurred because the shelter’s scanner could not read the correct frequency. When no chip can be found, often the animal is euthanized.

Agencies are trying to find a way to handle this problem.

Can A Microchip Cause Cancer?

It’s a rumor only. Here are some facts: As of June 2017, out of millions of pets microchipped in the United States, only two tumors had been found at the site of the microchip.

In 3.7 million pets microchipped in the United Kingdom over a 13-year-long span, just two tumors were found. Therefore, the risk of a microchip causing tumors is very, very small.

The myth began in the early 2000s, when studies involving laboratory mice or rats were done, and they found that microchips caused foreign body-induced tumors in less than 1% of these rodents.

The mice and rats used in the studies had already been used in cancer studies and didn’t come from a random, genetically varied population.

Then in 2007, ABC news reported the mice story because Alzheimer’s patients were beginning to be microchipped. Because of the rodent studies, the United States Food and Drug Administration felt more research should be done before microchips could be used in humans.

Adding fuel to the fire, ABC included a quote from a cancer researcher, saying he would not put a microchip in his pet, raising the alarm level a bit.

More than a decade later, millions of cats and dogs have been microchipped, with very little reason for concern.

Mice And Rats As Species Are Very Susceptible To Tumors

Dr. Andy Roark, DVM, puts it this way — he says the chances of a pet microchip causing cancer are around 1 in 1.85 million.

Dr. Roark says he has seen terror-inducing headlines. These sensational stories do a great deal of harm to pets who end up lost because of no microchip. He goes on to say that headlines such as “Pet owners duped! MICROCHIPS CAUSE CANCER!” drove him nuts, because they deter people from doing something that could very well save their pet’s life.

Therefore, though pet microchips are not 100% safe, tumors caused by them are extremely rare.

If the chip helps recover your lost pet, you would be very glad it had been implanted.

Simply the peace of mind gained from knowing you have a good chance to recover a missing pet with a microchip makes the happy ending much more possible.

After researching and writing this post, I realized I needed to call the shelter where I got Pogo. They told me they had put in a microchip, and I had never registered it.

The lady found the information, gave me his microchip number, and the phone number for Home Again, where I could register him. So, two years after they implanted it, I finished the process.

I doubt he will ever be lost, but in case of some natural disaster, at least he’s got a chance of coming home again.

4 thoughts on “Have You Asked, “What Is A Microchip For Pets?””