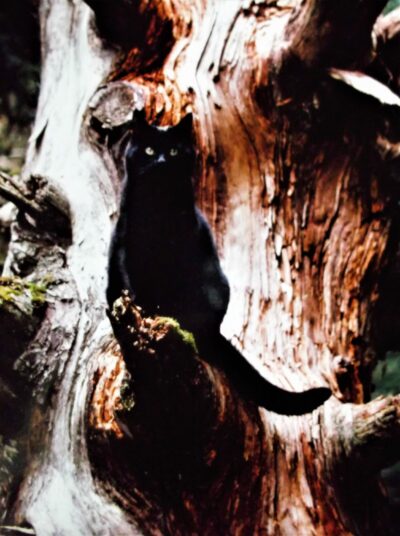 When I lived on my homesite claim on Spruce Island, often my only companions were my animals, three cats and a dog. They were not just pets; they were my friends. I sincerely believe that friends are family you choose yourself, and if some of my friends had four feet, what difference did it make? We loved each other.

This post is a small excerpt from my book, “Alaskan Attitudes.” It is the story of some early adventures in the life of my black cat, Sam.

“The folks who lived in the old house at Eskimo Cove when I first moved to my homestead had brought a female cat with them. Of course, she found a boyfriend in the 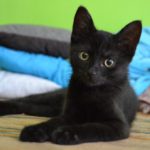 village and soon gave birth to a litter of kittens. I had my eye on the largest kitten, a feisty black male. He would become my cat.

“The little black kitten learned a powerful new skill before he was weaned from his mother. One of the men who stayed at the Cove house created an enormous trash pile on the beach, with the intention of burning it. He doused it thoroughly with gasoline and threw on a match. He didn’t see the black kitten exploring the opposite side of the intriguing pile of debris. Whoosh! The pile burst into flame. The black kitten shot backwards like a little cannonball. My friends said they had never seen a cat move backwards so fast. The cat lost all his whiskers, but sustained no other injury. Although his whiskers did eventually grow back, his appearance earned him the name of “Rooster.” However, when he moved to my house I renamed him “Sam,” following a life-long tradition of owning a black cat with that name.

“Sam adjusted well to life on the beach. When my friend, Cat, left her lovely dogs, Elkie and Silka, with me for the winter, Sam and I both enjoyed their company. Elkie, an elkhound, and Silka Sue, her daughter, an elkhound and Siberian mix, were well-mannered creatures, used to cats. Food was the only topic that might start an argument.

“Elkie and Sam found a frozen duck on the beach. As Sam couldn’t begin to carry the duck, Elkie picked it up and took it under the house.

“Then the fun began. Sam wanted that duck. Elkie had possession and didn’t intend to give up her prize. I could hear them under the house. The cat would get as close to the duck as he dared. Elkie would snarl and Sam would back off. Several times, I heard similar confrontations. Then Sam must have gotten too close — perhaps he even dared to hook a claw in the hapless duck. I heard Elkie issue a series of nasty barks and snarls, and as I watched out the window, I saw the black cat shoot out from under the house at

locomotive speed, backwards, of course. He must have run a good 20 feet. After that, he gave up on the duck.

“A couple of years later, Sam used his special backpedaling skill quite effectively against

an eagle. Caretaker Greg filleted halibut on the beach. He threw a skeleton down toward water’s edge. An eagle who had been watching the process swooped down and began tearing bits of fish off the bones. Sam, who had been supervising the whole process, decided that, since it was his beach (and he had Greg there to back him up), that fish skeleton belonged to him, not to the eagle. So he began stalking the eagle, an ambitious project, since the eagle was three times his size.

“He’d creep up as close as he could get until the eagle reared up in a threatening manner. Sam

immediately shot backwards a few feet. Again and again, he got as close to that eagle as he dared. Finally, the eagle, who could not eat his meal in peace, flew away in disgust, and Sam emerged victorious.”

If you liked this small sample of Alaskan Attitudes, you might enjoy the rest of the book. This little excerpt, “Friends are Family You Choose Yourself” is part of the chapter titled “Many of My Friends Have Four Feet.” If you are interested in ordering the book, you can do so from Amazon. The price is $14.00 plus shipping.

4 thoughts on “Friends Are Family You Choose Yourself”