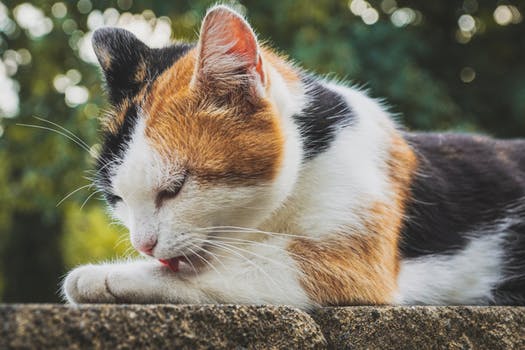 Cats are surrounded by myth and superstition, probably more so than any other animal.  They have been revered, considered bad luck or good luck, feared, and loved.

Always a source of mystery, cats have intrigued us and caused us to invent a multitude of stories about them.  Cat beliefs originated from a combination of ancient rituals, either worshiping cats or seeing them as demonic.  According to Cornell University psychology professor Tom Gilovich, it’s just the way the brain works.  We look for cause and effect where none exists.

Here are a few of the many superstitions regarding cats.  If you know others, please add them in comments at the end of this post.  These superstitions come from a book titled The Cat Lovers Companion, by Joan Moore.

Very often, a theatre keeps a cat as a lucky mascot.  Disaster will strike any actor who 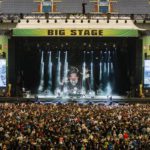 tries to kick it.

In fact, you must never kick a cat, for you will get rheumatism.  Also, if you want the devil to get you, drown a cat.

Worldwide, it is considered bad luck to mistreat a cat.  This belief must extend back to the days when the cat was a sacred animal in some religions.  To these believers, anyone who harmed a cat would be punished.

If you own a magician cat, it will bring you wealth if you keep it well-fed.  French legend tells you that a magician cat, or matagot, as the French called them, must be lured to you by a plump chicken.  Then you must carry the cat home without once looking backward.  At each meal, the matagot must be given the first mouthful of food.  In return, it will give you a gold coin every morning. 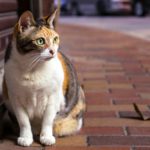 later Lord Mayor of London.  The story goes that he rescued the stray cat and saved its life, and later sold it to a land invested with rats.  The cat dispatched the rats, received a great reward of gold, and returned to Dick, giving him the gold, thus turning Dick’s luck from bad to good.

In Western Czechoslovakia, in what was known as Bohemia, the cat was regarded as a symbol of fertility.  Another belief was that if a cat was buried in a grain field, a good harvest was guaranteed. 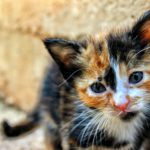 Japanese sailors took tri-colored cats on their ships to bring them good luck.  In Japanese gift shops, one can often find a cat statuette with his left paw raised.  It is believed that this cat brings good fortune.

It is a sailor’s belief that if the ship’s cat is meowing and appears cross, the voyage will be hard, with a strong following wind.  However, woe be it to the sailor who throws the cat overboard, as such an action will lead to an immediate storm.  It is considered good luck to have the cat on board. 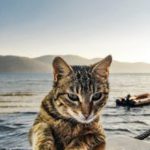 In Southern France, if a young unmarried girl steps on a cat’s tail, she must wait a year before she will find a husband.

In Celtic mythology, the month of May was considered a bad-luck month.  They also believed that kittens born in May would be badly-behaved troublemakers.

Cats are believed by some to have occult powers.  Others say that they also have the power to hypnotize.  If your cat has three different hues in its coat, you are protected against fire and fever.

Dreaming of cats is considered unfavorable.  Such a dream hints at treachery.

It is believed by many that having a black cat will bring good fortune.  Also, if you find an all-black cat with one pure-white hair, and pull that hair out without being scratched by the cat, you will become wealthy and will have good luck in love. Also, on the Yorkshire coast 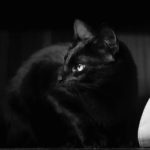 of Britain, fishermen’s wives believed that their husbands will return safely if they keep a black cat in the house.

The notion that if a black cat crosses your path it will bring bad luck is of relatively recent origin.  In older times, black cats were considered to be lucky.

When a cat washes its face in your living room, you can expect company.

If you are heading out on a journey and you hear the cat crying, it is unlucky to start your trip.  Return home and find out what the cat wants.

If you want your kitty to catch mice, don’t go to the pet shop and buy the cat.  If your feline is ever going to be good as a mouse catcher, you have to get him for free.

A cat racing around the house, and wildly clawing at cushions or curtains, is warning of a coming wind.  Also, if the cat sits with its back to the fire, watch for frost or a storm.

If newlyweds want to have a baby, they can put a cat in the empty cradle to sleep.  The baby will arrive soon.

These are some of the strange superstitions people have about cats.  If you have a favorite that is not on this list, please write it down and send it on.  Share it with your cantankerous cat lady and with other readers.  We will all find it of interest.

2 thoughts on “Do You Find Truth In These Common Cat Myths?”