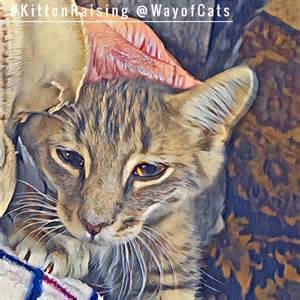 Hello, readers! It’s Lucinda the literate cat here with a tale from one of my favorite collections. This book is full of stories about fairy tale cats. It’s called “Cats’ Tales, Feline Fairy Tales From Around The World,” by Eleonore Schmid. I will be reviewing a story from this book called “The Cat in the Mourning Hat.” This story comes from Korea.

A man had a little cat he loved dearly. He fed her at his table every day, on a diet of fish and rice.

Now,that’s a rare man, who lets his cat come to the table to ask for food. Usually we receive criticism for such behavior, as you two-leggeds call it “begging” and frown on the practice.

Personally,I can see nothing wrong with it. If the two-legged is eating, it’s good to remind him not to forget us!

Then the man gets very sick. He tries treatments from several doctors, but he just gets worse and worse. Then one doctor tells him he knows of one medicine that would cure the man, but it was very hard to obtain.

To make the medicine, the doctor says he will need 1,000 rats. The sick man called his family together and asked them for advice, but they had no idea how to get that many rats quickly enough to keep him from dying.

The cat, who heard all this, said, “Good! At last I can do something in return for all I’ve been given. So, she came up with a clever plan. She put on a mourner’s hat and ran to a rat’s hole and sat outside. When the rat cautiously appeared, the cat scolded him. She told him he should realize she was in mourning.

“How is it that not one of you rats has been to offer me condolences,” asked the cat. She told him how rude and

selfish he and the other rats were.

That rat was very dumb. He apparently did not think very well, or he would have realized that, since cats and rats were traditional enemies, no self-respecting rat would want to offer them condolences.

Gullible and dumb, that’s what they are! Why would a rat want to give condolences to a cat who never offered any to them after eating a rat relative. Since they are so stupid, you might say they deserved what they got.

The rat told the other rats that he would go out first and express his condolences and then report back. The clever cat still sat outside the hole, and soon the rat came out to give his expressions of sympathy.

The cat received his well-wishes in a friendly way, so the rat went back and told the others to go and give condolences quickly and return.

Several rats came to visit the cat, but the cat told them that perhaps they could all come and bring their families to the Great Square where she could receive their condolences all at once.

How clever of that cat! Of course, we cats are known for our cleverness, and I am not surprised that this little cat came up with a good plan.

So, on the day of condolences, all the rats gathered and came to the square. Meanwhile, the cat had summoned many other cat friends to help with the slaughter when the time was right.

Then, when the cat appeared with her mourning hat, looking most dignified, the rats didn’t see until too late that they had been deceived. All the hidden cats came out and began killing the rats.

It didn’t take long for them to kill a couple thousand rats. The cat ran home and got a member of the household to follow her, and showed him the dead rats.

The doctor came and made the medicine from the rats, and the master regained his health. Thus the cat paid her two-legged back for all his care.

I notice the doctor showed no surprise at the cat’s feat. He must have realized it took a clever feline to figure out how to save the man’s life.

Since they get more rats than were needed for the medicine, I hope that some of the extras went to the hunter cats. After all, they deserved something for their efforts.

It always makes me happy to learn stories from far away and to see that a cat and her cleverness is enough to save the day, and a two-legged’s life. We are so remarkable, and it is very special when our cleverness is preserved in a story.

It is nice to know that there are people all over the world who think very highly of cats. I’d much rather read about such things than stories of sadness and cruelty. We cats deserve better than that.

The mourning hat is an interesting thing. It’s rather too bad we have nothing like that here in our culture. I find it interesting that the four-leggeds knew the significance of the hat.

We are shown in this way that the animals who live around the two-leggeds know more about our culture than we think. Our powers of observation and the amount we learn from you two-leggeds would amaze you, if you only knew the full extent of our knowledge.

However, be assured our motives are good. Just as the cat in the mourning hat wished to give back to her two-legged for his goodness, so we often act in accordance with what we know about you two-leggeds, in order to help out.

Consider yourselves fortunate that we do not speak English. If we did, we might persuade you of our cleverness to such an extent that you elevate us again to gods and goddesses as you did in the enlightened Egyptian times.

The stories in this book are from many countries: Vietnam, Turkey, Indonesia, Italy, Germany, Finland, Mongolia,

book. We are famous all over the world!

Not only are these good stories about cats, but the illustrations in the book are quite lovely. I enjoy looking at them.

I hope you enjoyed this short review. I would love it if you would comment after this post and tell me your thoughts about cats and how they influence our lives.