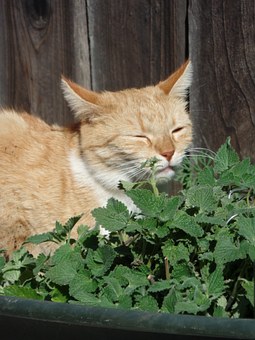 Catnip (Nepeta catarea) is a perennial herb, a member of the mint family.  It is safe for cats. The plant is native to Europe, Africa, and Asia, but once it was imported to the United States, it was found to grow well here, too.

The plant contains a chemical, nepetalactone, which is found in the leaves and stem.  The chemical gives cats a sense of euphoria when they sniff it, similar to the human reaction to marijuana.  Not all cats, however, are sensitive to catnip, though it is estimated that 50 to 75% of them will react to the plant.  The sensitivity is inherited.  When they are kittens, the chemical does not affect them.  Usually, the kitten has to be several months old before it will react to catnip.

HOW DOES CATNIP AFFECT YOUR CAT?

A cat has two reactions to catnip.  If he just sniffs the plant, it will act as a stimulant.  Often the cat gets a bit crazy after sniffing it, giving you serious cause for laughter.  Look at the cat’s eyes.  They may seem to take on an otherworldly gleam when the cat is high on that lovely herb.

I had a cat who loved catnip, going to great lengths to enjoy it.  I used to sprinkle some of it, loose, in a round metal cake pan.  Even though the cat was much bigger than that round pan, he did his best to roll in the catnip.  A goodly amount of the cat would hang over the sides of the pan, but nevertheless, he tried his best to fit in there. Once he managed to get a good quantity on his fur, he could enjoy it for quite some time afterwards.

If a cat eats the plant, it acts as a sedative.  When I lived in Kodiak, for a time I had a

large catnip plant inside the house for the cat’s winter enjoyment.  One of my cats would eat only a couple of leaves off the plant.  Then he would hunker down into that position that made him look like a big meatloaf, and he’d go into a “cat-atonic” state for a few hours.

HOW OFTEN CAN YOU GIVE YOUR CAT THIS PLANT?

It is suggested that you give your feline a serving of catnip once every two to three weeks, so the use will not become habitual.  His system can become used to the plant, and he will no longer respond.  Be aware that his “buzz” only lasts about 10 to 15 minutes.  Then he has to wait a few hours before the catnip again affects him.

Though catnip will not harm your cat, he can overdose.  You will know he’s had too much kitty drug if he vomits or has a bout of diarrhea after his sniff session.  Don’t worry — he will get over it soon.  Personally, I have never seen one of my cats O.D. on catnip, but my research showed that it could happen.

Yes, catnip has uses for humans, too.  It can be consumed as a calming tea to help ease nausea and headaches.  For humans, it also has some sedative properties.  And, here’s another good thing to know:  Catnip is a potent mosquito repellant.

The information for this post came from a post written by Dr. Jennifer Coates for the internet site, www.PetMed. Thank you, Dr. Coates, for this helpful article.

Catnip for cats is an interesting subject to me, so if you have questions or comments, please list them below, and I will either answer them or find someone who can.  I hope to hear from you.

7 thoughts on “Do You Know Why Do Cats React to Catnip?”