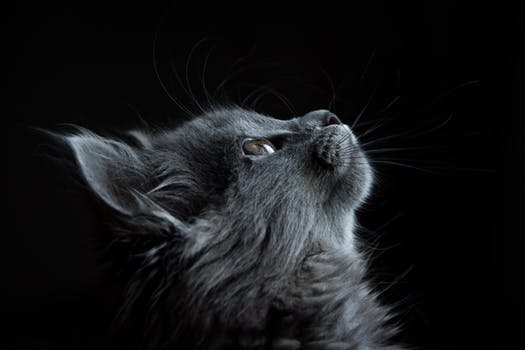 Have you ever wondered what goes on in your kitty’s fuzzy head? How does he think, without language? How does he see the world through his bright, round cat eyes?

DO CATS HAVE LANGUAGE?

Though they do not speak, cats do have a language of their own. Though not just composed of sounds, it also takes into account a great deal of additional data. The cat gathers information with his talented nose, for example. He can smell sickness, pain and disease. He can detect emotions, such as anger, sadness, and joy. He can determine the sex of another animal. He can tell by smelling if something tastes good or terrible. These nose-sniffs can lead to friendship, battle, or a love affair.

Body movements comprise another source of information for your cat. The cat learns about you or about another animal, just by the way the body moves.

The kitty will also transmit a great deal of information about his present state of mind with body movements. For example, messages might get passed along through the movement of the tail or the whole body, the state of the fur, or the way the animal walks.

WITH NO WORDS, HOW DO THEY FORM THOUGHTS?

I read recently that cats do not think in words, but in concepts. They must have a little movie running in their heads all the time.

Though they do not speak, they often do learn to understand many of the words we speak, especially phrases we use over and over again. From this understanding and their observations, they get a pretty good picture of what we are thinking or talking about. They have excellent memories, so they can often learn a great deal about us.

WHAT IS THE KEY TO KITTY THOUGHTS?

So how do they think? Results drive their behavior. As you cat owners know, If they find out that meowing will get them food, they will make their voices heard.

Do cats have deductive reasoning? I believe they do, to a certain extent. They become very good at observing and drawing conclusions, built on what they see.

They are “copy cats.” My Kodiak cat, Uptight Cat, watched us open the door so many times that he understood how the process worked. He would get on a chair, put both paws on the doorknob, and try to turn it. He just didn’t have the right kind of muscle structure to get the knob to turn, but he knew what to do and tried his best to do it.

My Carlos cat proved good at imitating. He watched me press the lever at the top of the kitchen garbage can to open it. One evening when I opened it, he stood on his hind legs with his front paws on the top of the garbage can, and looked inside. He found the contents fascinating, so when I closed the lid, he promptly opened it again.

He devoted considerable time to reopening that can. I chased him away, and shortly after, he would come back and open it again. I finally had to put a pile of books on the top, so the lid wouldn’t open.

My friend, Kim Warren, says he believes cats capable of deductive reasoning. Kim gave as his example the number of times he has seen a cat jump across an open space, seemingly knowing from observation that the distance is something he can jump successfully.

Once I saw Carlos cruise my entire fenced yard, looking up at the top of the fence, which stands

six feet high and has four gates. Before I got the finished gates built, we filled the openings with temporary plywood pieces, hinged to the gate supports. Each of these temporary gates rose to a slightly different height. The cat cruised by all four gates, and determined that the big double gate in front was the shortest.

He then returned to that gate, backed up as far as he could, and ran straight at it. He managed to leap up the first four feet, then clawed his way up the last foot and a half, tilted forward, and jumped out of the yard. He made this leap just once, perhaps to prove he could do it.

MY CAT’S ONE ENGLISH WORD

The neighbor’s cat, Tiger, became responsible for Carlos learning his one English word. Carlos observed and utilized what he learned.

Tiger spent most of the day at our house because he loved Carlos. However, he didn’t like me. When he first started coming — uninvited — through Carlos’s cat door, I sprayed the intruder from a water bottle to get him to leave. However, the water trick backfired. He would go out the cat door, turn around, and come right back in. I finally gave up and let him come in whenever he wanted.

His long memory would not let him forget the water bottle treatment, and he never did like me. I couldn’t pet him or pick him up. He’d hiss at me or scratch me. So, if I wanted him to leave, I’d get the broom and gently sweep him out the door. While I was removing him, I’d say, over and over, “Out cat! Out cat!”

Carlos, observing this behavior, put his new knowledge to good use. When he wanted out, he went to the door and in his loudest cat voice, said, “Ouooo! Ouooo!” He tried his best to say “out” but couldn’t quite manage the “t.” However, he got his message across.

I have had more than one cat figure out how to open a sliding closet door or a kitchen cabinet. They watch us open and close these doors and they understand how it works. A paw goes under a sliding door and it is pushed open. The same stealthy paw reaches under the bottom edge of the cabinet door and gives it a good tug. The wily cat wins again.

I had a cat for a time in Seattle that would not leave us alone at night when we went to bed. He didn’t think we should sleep when he wanted to stay awake. I tried shutting him in the closet at night. Of course, he had the amenities in there…his cat box, water, a nice bed…but he didn’t want to sleep. He soon developed a technique to get us to let him out of that closet.

He’d lie on his side, reach a paw under the door, and grab the spring, conveniently within his reach, that kept the bedroom door from banging against the wall. He’d give it a good jerk with his paw, and it would go, “sproing”. It made a loud sound, and he yanked on it repeatedly, creating so much noise that we couldn’t sleep. Guess what? We let him out. He won that battle.

HE TOOK HIS BABYSITTING DUTIES SERIOUSLY

When I lived on my homestead on Spruce Island near Kodiak, my big black cat, Sam, became a foster parent for two feral kittens I brought home. They’d reached about six weeks of age when I first got them.

Sam had very strict rules for those kittens until they reached  about a year of age.

For that first year, when I went hiking with Sam and the dog, Teddy, Sam would not let the kittens hike with us. If they tried to follow, he’d chase them back under the house. They could also not go to the beach unaccompanied.

2 thoughts on “Do You Know What Your Cat Thinks?”