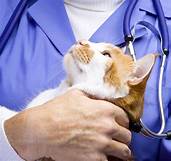 Cats tend to hide illnesses. In fact, they even hide themselves when they don’t feel well. It will be up to you to determine if the cat needs to be examined by the vet.

Is He Acting Differently?

From his behavior you can gain some clues as to what is wrong. The most common sign in many cats that they are sick is the tendency to hide in a quiet, hidden place. They will often lie quietly in a hunched position. They may not groom themselves. They may be purring, which cats do when they are happy, but also when they are sick or in pain.

If the cat is having breathing difficulties, he may refuse to lie on his side. He may keep his head raised.

If he is having a neurological problem, he may be confused or have seizures. He may also press his head into furniture or walls, not like the head-butting that he does out of affection.

What About His Eating and Bathroom Habits?

Is he eating, drinking, urinating, or defecating any more or any less than is normal? Usually, when a cat is sick, he loses his appetite.

However, some diseases, such as kidney disease or diabetes, will cause an increase in appetite. If he is suddenly ravenous, or if he urinates more frequently, it might be an indication of those diseases.

If he makes frequent sudden attempts to urinate, and only small amounts are produced, or if he shows signs of pain (including meowing and straining) he could have a UTI or blockage. This inability to urinate is very common in cats, especially neutered males, and can be a life-threatening situation.

My Carlos contracted FUS while we were in Kodiak. I noticed him spending considerable time scratching in the cat box for a couple of days. Then one morning he scratched and tried to urinate, then came running in to me, jumped on the table next to me and gave two yowls of pain.

I knew right away what was wrong. He might as well have spoken English. I put him in his carrier and we went right to the vet. When we got there, she put him on his back on the floor and pressed along the length of the urinary tract.

The cat cried once in pain, but lay still. The urine that came out was bloody. The vet gave him a shot and gave me some pills to give him. She said we were fortunate that there was no infection. He recovered, and never had the problem again.

I am so glad I took him right to the vet, as I would have lost him if I had not done so.

Is He Vomiting Or Regurgitating His Food? 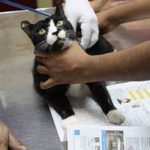 Vomiting food after eating can indicate a number of problems. It could be a sign of poisoning, blockage, or some other problem. If the cat vomits for more than a few hours or vomits repeatedly for a day or more, take him to the vet.

If the vomiting is accompanied by lethargy, diarrhea, or reluctance to move, do contact the vet. After all, better safe than sorry. If you wait, you might lose your kitty.

Does The Cat Have Diarrhea or Constipation?

Diarrhea can be the result of many things. The cat could be nervous or perhaps you recently changed his diet. He could have a food sensitivity, intestinal parasites, infection, poisoning or some other illness. Watery diarrhea, or diarrhea with signs of blood or accompanied by vomiting tells you it is time to call the vet.

Cats commonly become constipated. If they strain to defecate, cry or meow in their litter box and then pass small hard feces or watery feces, they are constipated. Your vet will have a remedy.

Examine the cat’s litter box from time to time to be sure he has no problems. You can tell by looking if he is defecating as he should be.

Is Your Cat Coughing?

There are many causes for coughing. These can include foreign bodies, hairballs, allergies, asthma, tumors, heart disease, lung disease, and several other illnesses that are contagious.

If coughing persists for more than a day, call the vet. If he is coughing over and over, has difficulty breathing, or his gums are bluish, he is in need of immediate medical

What Is His Gum Color?

Check kitty’s gums if you think he’s having a health issue. They should be a deep pink. If you press the gums with your thumb, they should return to pink within two seconds after you lift your thumb.

If they are very pale or slow to return to pink, it could be caused by anemia, shock or poor circulation.

Bluish gums or tongue could indicate a lack of oxygen. Bright red gums could indicate overheating or carbon monoxide poisoning. Yellow gums may be a sign of jaundice. Tiny red splotches can indicate a problem with blood-clotting.

Bad breath is often caused by tooth problems. Pain and redness around the gum line are all caused by a dental problem.

Does He Have A Normal Temperature?

To take a cat’s temperature, use a rectal thermometer. Lubricate with petroleum jelly and insert one inch to one and a half inches into the cat’s rectum. Leave it there for 10 seconds to a minute, depending on the type of thermometer. 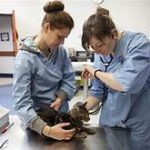 It’s always best to be sure. If you have any questions about his symptoms, call your vet. It’s better to find it is a false alarm than to ignore the symptoms of a sick cat.

Too bad our kitties don’t speak to us in English. It is so frustrating to be certain that something is wrong, but not to know what it is. We do our best to follow the clues to try to figure out what the cat is telling us (or perhaps not telling us.) It is up to us to do what we can to help our kitty back to health.

Information for this article came from Vetstreet.com. The original article was titled How To Tell If Your Cat Is Sick.

6 thoughts on “Do You Know If Your Cat Is Ill?”