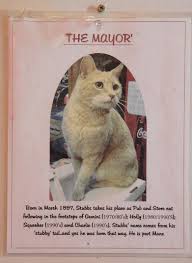 We find today’s reality fraught with political contests and confrontations. One doesn’t usually find this arena populated by cats. What do you think about cats and politics? Will they mix?

Not a common mixture, for sure. However, my state of Alaska has had one positive experience with such a combination. In 1997, the town of Talkeetna elected a ginger cat named Stubbs as a write-in choice for mayor.

Mayor Stubbs held that office for twenty years. He must have been a well-regarded mayor to be reelected so often.

The cat got elected even though he had zero qualifications. However, in the small town with fewer than 900 residents, he remained popular. Residents tell us he achieved popularity for a number of reasons.

For one, he didn’t raise taxes. Talkeetna still has no sales tax. Mayor Stubbs had a “laissez-faire” attitude toward government and business. He adopted a no-interference policy that gained popularity with residents.

He also had a quality often questioned when we talk of current political candidates: honesty. What a great trait for a politician to have! 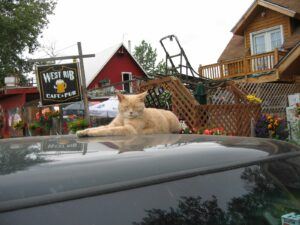 Mayor Stubbs certainly worked to improve the town’s public image. He met many visitors, as people always asked to meet the mayor. He gave out friendship and welcoming purrs to all he met.

It’s hard to believe a creature who doesn’t even have opposable thumbs could be considered a good candidate. However, having two extra feet and legs must make up for it, as Mayor Stubbs managed to get around to meet his constituents quite frequently.

Stubbs’ office could be found at Nagley’s Store, a great location for a politician, as it gave the mayor a chance to meet many locals as well as visitors when they came to the store. He had an “open door” policy concerning these people. 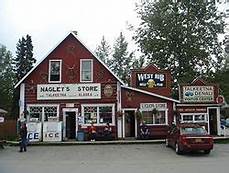 The mayoral election at the time of Stubb’s being chosen for office met with apathy by community members. There didn’t seem to be any worthy candidate. This lack of interest on the part of the community led to the idea of adding Stubbs’ name as a write-in candidate. Once his leadership became established, his popularity grew.

From then on, his continued election as mayor demonstrated his ability to lead, and he became a shoo-in at election time.

In Talkeetna, the mayorhead has become mostly symbolic, and what better symbol to adapt than that of a cat? His policies included an allowance for plenty of nap-time, and time to express affection and cuddling with all friends and family.

Since Stubbs didn’t say much, political battles and harmful dialogs between public officials did not occur. However, even this honest politician suffered a vicious attack by another four-legged constituent, probably jealous of his popularity, in 2013.

Attack From Another Four-Legged Constituent Results In Injury

At that time, Stubbs received serious injuries by an attack from a vicious neighborhood dog. Stubbs ended up in the hospital with a punctured lung, fractured sternum, and deep lacerations.

He recovered and resumed his duties. It’s the life of a politician — when you reside in the public eye, 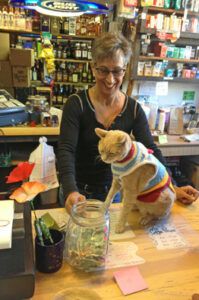 you tend to downplay the seriousness of your personal problems. Stubbs continued to govern, even after his injuries.

So, where does one find this small Alaskan town? Talkeetna falls about halfway between Anchorage and the foothills of Denali National Park, a Southern Alaska attraction.

Besides its feline mayor, Talkeetna has become known for a couple of things. One includes the Moose Dropping Festival. For this event, every July someone flings moose dung from a helicopter. Those watching try to guess where the poop will land.

You fellows might enjoy checking out this contest — The event called the “Wilderness Woman Contest.” Local females compete in games of strength, such as tossing firewood and hunting moose.

With fewer than 900 residents, the town better fits the description of a village. In fact, as a part of an unincorporated territory, it does not qualify as a town at all.

An Honest Politician — Have You Ever Heard Of Such A Thing?

Still, it has its local elections, and Mayor Stubbs earned his title honestly. His continued honest policy proves refreshing in the light of all the lies perpetrated by many human candidates. Mayor Stubbs didn’t get involved in lies or corruption. 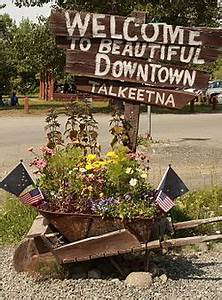 Now, we have received hints that another kitten, Denali, one of Stubbs’ descendants, could take over Stubbs’ role, as he has followed Stubbs’ pawprints in many areas. We hope that this feline tradition will continue.

Now, at her insistence, I will allow my co-editor, Lucinda the literate cat, to add her comments, as she has become being very insistent that she gains a chance to express her opinion.

Take it away, Lucinda!

Lucinda’s Platform, Should She Decide To Run

“Thank you, CCL (Cantankerous Cat Lady). I think it high time cats took an interest in politics. After all, many of your rules and regulations influence our lives. Well, if I were to run for office, my platform would contain these issues:

1) Campaign to find a home for every cat in the homeless shelter. I find it very sad how many cats have no home and family. I would pass laws that would help place these cats in good situations.

2) Make the horrible practice of declawing illegal. The cruel practice requires the first joint of the toe to be cut off in order to remove the claw.

Besides the pain and suffering this practice causes, without claws the cat loses his most important weapon of self-defence. In this cruel world, that can often be a death sentence to a cat.

If this honesty causes some companies to go out of business, so much the better. Cats’ health has become compromised by sub-standard foods.

Those three issues would make a good start. Moving forward, more improvements could be made.

Meanwhile, I applaud Mayor Stubbs and all the fine two-leggeds who voted for him. That’s the kind of progress I like to see.”

4 thoughts on “Cats And Politics: Will They Mix?”