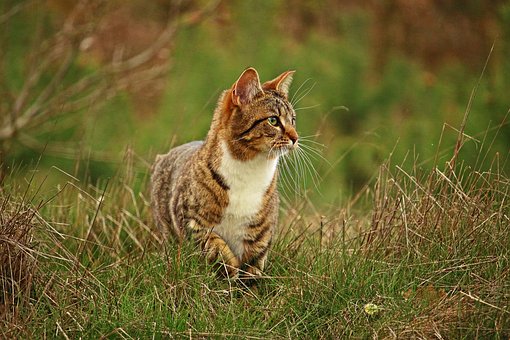 Hello, readers, from Lucinda the literate cat. I just read a story I really liked. It was called, “How a Cat Played Robinson Crusoe,” by Charles G. D. Roberts. Fortunately, in this story, the cat survives a Robinson Crusoe adventure.

I liked this story because it showed how a cat can survive a bad situation by keeping its wits about it and finding clever ways to do the necessary to stay alive.

The poor cat did not plan to have a Robinson Crusoe adventure. Her two-legged family spent their summer on a small island, and of course took the cat along. When it came time to go home, they could not find their pet.

The cat had found a half-buried barrel where she could lie in comfort and sleep in the sun. A couple days before the family’s departure, a strong wind had toppled the barrel and buried it in the sand.

The family didn’t know what had happened to the cat. They thought perhaps an eagle had taken her. So, they finally gave up searching and went home without her. 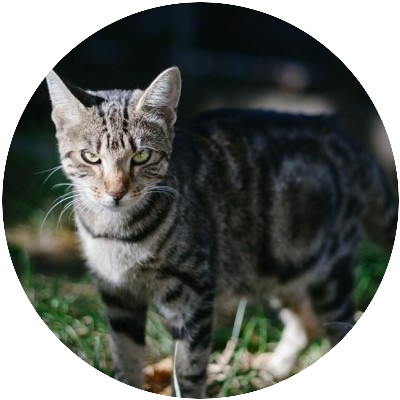 The barrel remained covered for three days. Then the blowing wind blew sand off one corner of the barrel and a bit of sun shone in. The cat stuck her paw through the hole and it grew a bit bigger.

She began digging at the sand to enlarge the hole, until it grew large enough for her to escape her prison.

We cats are very ingenious and can work our way out of many situations. Just like any other creature, we have a desire to survive and will do whatever we can to ensure that we do.

Now comes the bad part. The cat runs to the house with great difficulty, as the island is being blown by gale force winds. She anticipates warmth, comfort, and food. Instead, she finds the house sealed up and frightening, and certainly not a place of comfort.

Frustrated and desolate, she soon realizes her survival is up to her. It is fortunate that she had learned to hunt early in life, and she soon catches mice and shrews who lived in the island grass, giving her a good source of food.

For a while she couldn’t believe she had been abandoned and roamed around the house, crying and mournful. Finally, she accepted her fate, and did her best to stay fed and to find some kind of shelter for the night.

When a wreck of a small Nova Scotia schooner washes on shore, numerous rats flee from it. The cat learns that they are there when she jumps on something rustling in the grass, thinking it is a mouse, and is bitten by a large old ship’s rat.

Then she gets mad because the rat bit her, and launches a major counter-attack and emerges the winner.

I can only imagine how hard a time that little cat had trying to survive. She was cold and wet most of the time and had no good place to sleep. Can you imagine how difficult things were for her? We cats are survivors and will do as much as we can to get through a bad situation.

As fall moved into winter, the cat felt her homelessness keenly, as she had no sheltered place to sleep. Fortunately, the hunting was good, so she had food.

However, she did not give up, even when she was cold and soaked much of the time. It makes me proud to be a cat. Despite the odds against her, she managed to find a way to survive.

When an owl tries to attack her, she jumps in the air after it, even though the large bird frightened her a bit. The owl swooped away, and from then on the owls that fed on the island’s rodents left her alone.

Sometimes you can pretend a courage you don’t really have, and cause your opponent to give you more respect. Sometimes a positive attitude can carry the day. Perhaps I could call it “cattitude.” 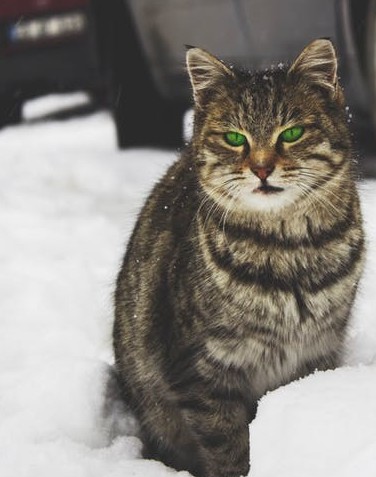 When the snows came, the shivering cat found that all the other creatures except her had a winter shelter. Also, her food supply now disappeared under the snow and long grass, as the mice stayed in their cosy shelters most of the time.

She keeps moving, looking for shelter; looking for game. This activity keeps her from freezing to death, but she is now nearly starving. Then she finds a spot where the wind had blown the snow so hard that a bare spot of sand appears.

“Doors” to mouse tunnels leading under the snow appear near the bare spot, and she crouches there until a mouse appears. She pounces immediately, not wanting the mouse to disappear again, and at last scores a decent meal.

From this experience, she learns the snow is soft underneath and can be penetrated. Outside the mouse “doors,” she finds she is able to pounce on the snow covering the mouse, obstructing their escape with an outstretched paw, and with this new form of hunting, finds plenty of food.

By trying to follow a mouse into its snowy tunnel, she discovers it is warmer under the snow. Near the porch of the house is a drift of snow, which she cautiously backs into. By turning around a few times, she manages to create a small cave, big enough for a bedroom, and warm and cosy. She can look out her doorway and see what happens around her.

Thus, she gets through the winter, having a warm place to sleep and a way to get fed. It is good that our wild ancestors give us the ability to link into old survival instincts.

When spring returns and the weather gets warm again, one day she hears a boat approaching the island. Watching, she sees her old family returning to the beach.

She runs to meet them and is swept up into loving arms, returned again to her family. It is too bad there is no way she can tell them what she has been through. They are so lucky to have her back.

I wonder if a dog could have survived that winter. He could hunt a bit, but not as well or as efficiently as a cat. And where would he have slept all winter? Would he have learned how to sleep in the snow? I think it might have been much more difficult for a dog to play Robinson Crusoe. I think we cats are very remarkable creatures.