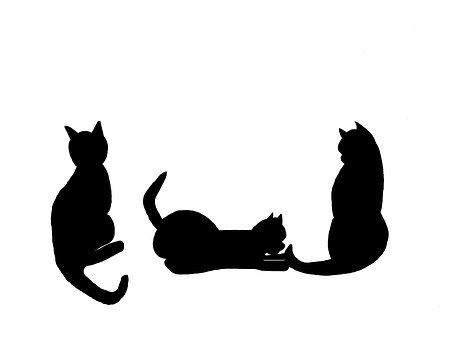 There is an ongoing debate in the pet owners’ world over who is smarter, dogs or cats? Which one would you vote for? Before you decide, watch the video embedded in this post. Then answer this question: Can cats be trained like dogs?

I would guess that dogs are much easier to train than cats because they are often predisposed to please, while a cat couldn’t care less. However, I know cats are very smart. I’ve observed them do some remarkable things, including some that required the use of deductive reasoning.

My last cat, Carlos, learned to give me a high five for his food. He was so cute — I think he enjoyed the attention he got for doing his one trick. He could figure out many things, and I believe I missed a bet by not teaching him more “tricks.”

If you don’t believe a cat can learn to “perform,” look at the video in this post of the Savitsky cats. Actually, you can watch two videos — the one in the right sidebar shows part of the cats’ performance on “America’s Got Talent.” According to statistics I found, the Savitsky cats can outperform 99% of trained dogs. Now, that’s a major coup for the cat world.


Who are the Savitsky cats? They come from the Ukraine. They are trained and shown by the Savitsky family: Svetlana, the mother, Marina, the daughter, and Misha, the son. The family also includes 10 cats and a dog.

Svetlana wanted to be a wild animal trainer from her childhood. She wanted to train lions and tigers, until she met a real, live tiger. Then she decided that going smaller made sense.

After all, domestic cats are still in the same family, but much smaller. So, Svetlana, at age 10, began training her cat.

Now, 20 years later, she has a group of cats that can prove the world wrong about the abilities of domestic felines. When the troupe appeared on “America’s Got Talent,” she made good on her belief that cats are imminently trainable, as the cats wowed the audience and stole the show.

Now Svetlana and her son and daughter travel the world with their cats, amazing and charming audiences everywhere.

These cats have performed all over Europe, including Germany, France, Ukraine, Latvia, Estonia, and the Middle East. Now they have also performed in the United States.

Notable performances include an annual appearance at the Christmas show, “L’arbre de Noel” in France, and at the 26th International Festival of Massey (also in France.)

What kind of cats are these animals? I searched for an answer. In one account, I learned that there is one Persian in the group. They look to me to be mostly Maine Coon cats, though one of them looks like a Himalayan. If any of my readers know more about these cats, please tell us in comments.

There is not much information online about the Savitsky cats. I have questions. I would like to know how the family trains these cats. What is their teaching method, besides monumental patience? Svetlana, I think you could write an instruction book on the subject, as it would satisfy our curiosity.

How long does it take to train a cat to performance standards? Have all the cats you have added to your feline family been trainable? Do you have criteria you use to select a new cat?

If anyone knows the answers to these questions, please add to the comments. Tell us if any of you have seen a live performance? Meanwhile, enjoy the video in this post.

Don’t forget that there is another Savitsky video in the right sidebar of my website. What a treat, watching these cats perform. I am impressed, Svetlana, and I believe you have proved to the world that, yes, cats can be trained even better than dogs.