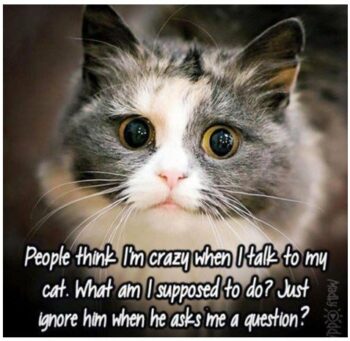 If you have shared your home with a cat for some time, you have undoubtedly figured out the meanings of some cat behaviors.

The purpose of this post is to help you decode a few of those behaviors, in case you are still in the dark. Therefore, we will call this endeavor Cat Behavior 101.

Though a cat cannot speak our language, he does his best to communicate with his human. Often, that communication comes as some sort of body language, so it behooves us to learn what the cat signals through tail, eyes, fur, etc. Read the clues your kitty offers.

Here you will find translations of some cat messages:

Ah, you’d love to reach down and rub that tummy…however, beware! The fact that he’s exposing it means that he feels relaxed and trusting; comfortable that he is safe. That doesn’t mean he wants that tummy rubbed.

If you do so, you may find your hand wrapped in four paws, claws extended, and a bite to the arm added as good measure. Just find comfort in knowing you are trusted. Just don’t push your luck!

She Gives You Head Butts

With this action, kitty is marking you as hers, adding her scent to your own, and saying “you belong to me. Such a time is a good one to give kitty some attention or loving, as she must be feeling social.

Mocha likes to rub against me when I’m standing or walking, letting me know he cares.

Rubbing Cheeks On Everything

Cats don’t just mark living creatures as their own. They make sure their territory becomes well-marked with this action. As the kitty has scent glands around the mouth, chin, and cheeks, they leave behind their unique sent when they rub on any object.

Ownership! An important quality to a cat, and referring to territory or the living beings who reside in that territory.

One of my references calls this “winking.” Basically, it’s the equivalent of a kitty kiss. If your cat slow-blinks at you, consider it a true compliment. Kitty is telling you she is comfortable with you and enjoys keeping you company.

Try sending back the same signal to your cat — gaze at her and slowly close and open your eyes. With luck, kitty will send back that message to you.

Kneading, Either On You Or Close By

This behavior most likely originated in kittenhood, when the baby would knead Mother to get the milk to flow. My mother used to call it “making biscuits,” a term that many still use today.

Even though they are no longer nursing, the behavior is comforting and calming to the cat, helping with relaxation before sleep. Kitty also leaves her mark with this behavior, as there are scent glands in the paws.

My cat, Carlos, always slept on the pillow next to me. Before sleep, he’d purr and knead the edge of the pillow, helping to relax both of us and lead us to sleep. Interesting, that neither Pogo, my last cat, nor Mocha, the present one, do not knead.

Purring For A Purpose

Most often a sign of kitty contentment, the purr can actually serve to relax you as well. A cat purrs from satisfaction, but the purr can have several other functions as well.

If kitty is sick, stressed, or injured, he might purr to calm himself or to release endorphines that help reduce pain. The vibration from the purr can help with healing, and is said to be helpful when healing a broken bone.

Whatever the reason, recognize the purr as a force for good.

Cats often make this sound when watching birds through the window. He’d love to be right out there where he could capture one or two for an afternoon snack.

This funny little sound could originate for a couple of reasons. Some experts believe that the sound is an exaggeration of the “killing bite” given by the cat when he grabs his prey by the neck.

It’s believed, too, that it can be the cat simply trying to mimic the sounds that their prey might make. It might be a sound born of frustration, because the cat can’t get in the midst of those dratted birds and eat a few of them.

Kitty can see that your hunting skills are not up to snuff, so perhaps she wants to help you out. I always felt that my cat brought me meat to use in my tacos, though I’ve never tried it. She also regards you as family, and wants to make sure you eat.

Some cat experts believe the cat has more selfish reasons. Perhaps it’s bringing the kill home to be enjoyed later, when kitty becomes hungry. Perhaps she wants to play with it after she comes in from the hunt.

Is your cat sitting on or near you and staring into your eyes? This stare might be a sign of affection. Of course, if it’s morning and you are still in bed, your cat may be staring as a way of saying “Get up! Feed me!”

However, it could indicate other things. If kitty shows other body signs of stress, such as ears laid back and tail flipping, best not to try a stare-down. Kitty could take such behavior as a sign of aggression and become even more upset.

Have you ever had your cat stare at something you can’t see? This one can be unnerving. Are they in contact with the spirit world?

With Mocha, I’ve found an interesting reason for his stare. At night, he stares at the living room windows, and I’m sure he’s reacting to the reflections he sees in there. One of those is me, but he does not know that. He may become anxious at seeing all those mirror reflections.

Kitty is saying, “Let’s keep this object safe for later.” As food and water dishes are a part of established territory, kitty might feel it’s the best place to keep something from potential territory invaders or predators.

Trying To Cover Food Dish With The Floor

Your cat may be trying to accomplish a couple of things with this move. Perhaps he just does not like the food, and trying to cover it in effect tells you, “This is garbage!”

Or, it might be an instinctive behavior in which the cat wants to cover the food to keep it from others. If he can hide it, he can come back later and eat it.

With my cats, it seems like a way of saying the food is not to their liking, and they just want it to go away.

These Behaviors Just Scratch The Surface

These are just a few of the potential mystifying actions of your cat. If you’d like to learn more, read the references I’ve listed, as they include other behaviors besides the ones I have listed.

More important: Observe your cat and try to deduce the reason(s) behind his actions. You, being the closest to him, will interpret his meanings best. He’s a creature that deserves your questions and observations.

Most of all, enjoy your interaction with this alien animal who shares your home. Knowing him well will enrich your life.