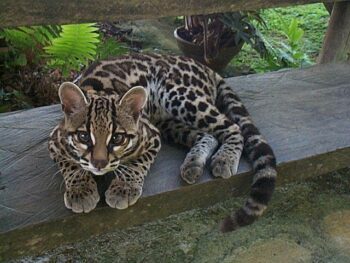 This small spotted wild cat is native to the rainforests of Central and South America as well as in parts of Mexico. There are 10 subspecies of this animal, each with a slight physical variation that differentiates it from the others.

The margay has two other common names: Tree ocelot and long-tailed spotted cat. Its scientific name is Leopardus wiedii. For a range of reasons, the cat has a “near threatened” conservation status.

The margay has thick, soft fur that ranges in color from greyish brown to tawny yellow. Its coat is beautifully marked with numerous rows of dark spots and rosettes. As distinguishing as a fingerprint, each margay’s coat has a unique pattern.

The cat’s long tail can reach up to 51 cm (20 in) in length, giving great help with balance. This remarkable tail is marked with 10 to 12 dark rings. The tip is black. The backs of the ears are also black, with white central markings.

A unique feature of this cat’s coat appears on the back of the neck. Here, the fur points forward rather than backwards. Also, margay eyes are very large in proportion to its head size.

Average length of a full-grown margay is 18 to 27 inches, with a tail length of 9 to 20 inches. The cat stands approximately 12 inches high, and weighs from 5 to 11 pounds.

This agile animal is an excellent climber, and has the unique ability of being able to descend a tree headfirst. Flexible ankles will turn up to 180 degrees, so he can grasp branches equally well with hind or front paws.

When the margay jumps over a long distance, the cat flings all of his four feet out, as a squirrel does. He keeps his balance with the help of his long tail and large paws.

He can also hang by one hind foot from a branch, while manipulating an object (prey, perhaps) in his front paws. Though he does some hunting in trees, he is more likely to hunt and travel on the ground.

The Margay lives in forests for the most part, mostly in tropical and subtropical regions and evergreen forests. The cat has only been reported occasionally outside forested areas.

Though margays are more adapted to living in trees than other cats, at times they do hunt and travel on the ground. Territorial animals, as are other cats, this forest dweller tends to avoid others of their species except during mating season.

This small cat avoids its larger look-alike, the ocelot, as much as possible, because both animals compete for the same prey. One negative effect of this process is that the margay is forced into less protected areas where the threat of habitat loss and human interaction is greater.

Threats To The Animal

There are a number of threats facing the margay, thus creating its “near threatened” status. Its habitat is being fragmented and destroyed due to deforestation and conversion of such areas into agricultural sites. Other threats include:

What Is Its Diet?

The margay, like other cats, is a carnivore. As such, he eats a wide variety of prey. These can include mammals from ground or trees. A number of items might be on the menu, including birds, birds’ eggs, reptiles, amphibians, and arthropods. It will also eat fruits and grasses to aid digestion.

Though it hunts on the ground at times, it can find its prey in trees. In fact, it is known to hunt squirrels entirely in trees. It can mimic the sound of the pied tamarin, an infant monkey, to lure it in to close range.

This cat likes to lie in ambush for prey, instead of stalking it.

Unlike many cats, who hunt at dawn and dusk, (crepuscular) the margay is mainly noctournal. It tends to spend its days in the trees, where it rests high up in the branches, in tangles of lianas (vines).

When the female is in heat, she will make a long, moaning call to attract a mate. The male responds with yelping or trilling sounds, as well as rapidly shaking his head from side to side. This behavior seems to be unique to the margay.

Copulation takes place primarily in the trees, and can occur several times while the female remains in heat. Gestation lasts about 80 days, and results in the birth of one to two kittens. Their eyes open at around two weeks of age, and they begin eating solid food at seven to eight weeks.

Interesting — margays are serially monogamous animals, meaning they form a temporary bond with their mate that will last throughout the breeding season. Before the kittens are born, the male leaves and does not help with raising them. Weaning ocurs at around 8 weeks.

It’s nearly a year before the kittens reach their full adult size. They don’t usually start breeding until they are about 2 or 3. It is believed that the females give birth only once every two years.

Nature plans so well…the female only has two teats, so if she had more than two kittens, she’d have a problem. However, since the relationship with her chosen mate is monogamous until the kittens arrive, Mama cat will not mate with other males, and does not need more than two feeding stations.

Sadly, the margay kittens have a 50% mortality rate. Unfortunate, as only one or two kittens are born every couple of years to that female, and half of them will not reach adulthood. Coupled with the threats to their habitat, it’s no wonder their population is declining.

Hopefully, something can be done to save these cats from joining the endangered list. There are those among us who work to provide a solution. Read this article about Jon Ayers to learn about one such organization.