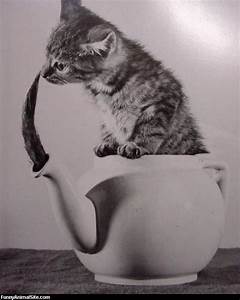 Do you understand what is being communicated by your cat’s wagging tail? It could be a very subtle message. Dogs are fairly straightforward with tail messages. Cats are far more subtle. Their tail-wagging can have nuances of meaning.

The direction and the speed of the tail swish conveys their feelings. If the tail is thrashed quickly back and forth, the cat is unhappy or wants to be left alone. Tails that move slowly from left to right often indicate that the cat is mildly annoyed.

I believe I saw such tail movement before my hip replacement. I knew I couldn’t bend down to clean the litter box when I got home, so I put it on the bench in my tub. Before the cat used it, he would go to the old location, stand there and look at where the box used to be, and his tail would slowly swish back and forth. Why had I moved the box? He didn’t get it.

Sometimes a cat will swish its tail back and forth before pouncing, either on prey or on a toy. We must pay attention to the way the cat swishes its tail. Don’t make assumptions as to the meaning.

What the Twitch Means in Cat Tail Language

Let’s suppose your cat is sitting in the window, watching birds. The tail begins to twitch. He is not 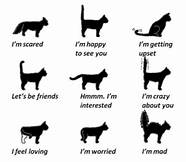 necessarily upset, but is just staying extremely well-focused on the creatures he sees out the window.

What the Quiver Means in Cat Tail Language

Your cat might make quick, tiny tail wags when he is excited to see you. The tail may be in a vertical position with just the tip making quick little quiver movements. These are similar to the movement of the rattlesnake’s tail. However, the kitty is just welcoming you. The tail quiver may be accompanied by purring, face rubbing, or even happy vocalizations.

Return the greeting even though you have no tail to quiver.

If you call your cat, he may want to think about it before responding. Is it worth the cat’s time to answer your call? Of course, if there 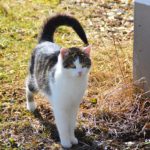 is food involved, the cat will come on the run.

I’ve always given food rewards when teaching my cats to come when called. After they learned to return at the call, sometimes I would give them a treat and sometimes not. Rewarding the behavior at least part of the time gives the cat reason to consider your request.

If he is asleep and your call wakes him, that slight flick of the tail is an acknowledgment that the cat has heard you, but chooses to ignore you. This is actually a sign of contentment, because your cat is saying that he feels comfortable remaining asleep in your presence.

The bottom line: Cats are going to do everything on their terms, which is should come as no surprise to you if you share your life with a cat.

The Tail Conveys Many Messages

A cat’s tail is a barometer for his feelings. However, the tail is only part of the message. To get the full message, you must consider the whole cat. However, here are some tail messages. 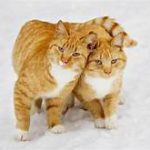 When a cat wraps his tail around you or another pet, it is the equivalent of putting an arm around a love one, and indicates companionship.

When the cat holds the tail high in the air as he moves about his territory, he is expressing confidence and contentment. A tail that sticks straight up means happiness and a willingness to be friendly. If the tip of an erect tail twitches, it might signify a particularly happy moment.

A fast-wagging tail or one thumping the ground means the cat is ready to attack. If the end of the tail is flicking back and forth, it usually indicates frustration or heightened emotions.

If the tail is tucked between the legs, the cat is fearful. 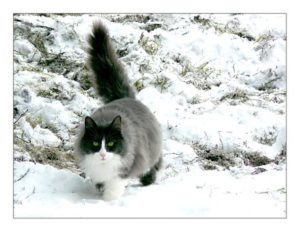 My cat, Carlos, had a special tail movement that I observed now and then. For example, one day when we had had a disagreement, he left me on the front porch and stalked indignantly out his cat door in the fence. Just before he disappeared from view, he gave his tail a strong upward jerk. I’ve always interpreted that as a cat’s way of saying “up yours.”

The kitty tail can be very expressive when the cat is very angry. Once, when I was standing in my front yard in Kodiak talking to the neighbors, Carlos, social cat that he was, left his buddy, Tiger and came to join us.

Across the street in a fenced yard was a young Boxer. She, too, wanted to join the party, so over the fence she flew, and came running toward us.

I became concerned, as her trajectory brought her between Carlos and the house. However, I’d forgotten the neighbor’s cat, Tiger, who was under my porch steps. Tiger saw that the dog was cutting off Carlos’s escape route, and did something about it. 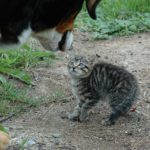 He came out from under that porch walking on his toes, sideways, back arched, making him look bigger than he actually was. His fur stood straight out. He was yowling loud curses at the dog.

And that marvelous tail! It was fluffed out so that it looked like a large bottle brush. It was curved into the shape of a shepherd’s hook.

The dog stopped dead and stared at the cat. That distraction was enough for Carlos to make a run for the porch steps, and Tiger followed. The two of them hurled curses at the poor dog, until the neighbor took her and put her back in her yard.

The cat may not be able to talk, but he has multiple ways to communicate. We just have to learn how to interpret them. 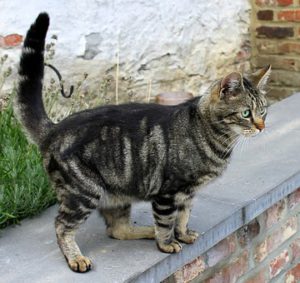 2 thoughts on “Can You Interpret the Meaning of Your Cat’s Wagging Tail?”