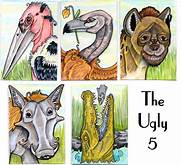 Hello, all — Lucinda here, with a new book review. This time I am reviewing a book recommended by a member of my fan club. It is quite a book. It’s called The Ugly Five, written by Julia Donaldson, and is about the five ugliest animals in Africa.

I wonder if this person suggested this book just to get a cat’s reaction? Well, he is getting one. When I first started the book, I got to the first animal’s name and almost fell off my chair. When I run my paws under the word, I can hear it, but the image of the creature also flashes through my mind.

I saw that animal, called a wildebeest, and my fur started to rise. This animal looks to be almost as big as a moose. (Now, there’s an ugly animal that doesn’t live in Africa!)  I was ready to run, and then I realized I was just looking at the image of the animal, and he wasn’t really alive. He was just in the book!

Then I relaxed. I’m afraid my impressions of the jungle changed a bit, though. When I read The Jungle Book, I was ready to see what the jungle was like. Now I’ve decided I’d rather stay where I am.

It might seem strange that I am reviewing two “ugly” books in a row. However, the last summary was about transformation (I learned that big word there.) In this book, these animals are ugly and they stay that way.

Because the book didn’t tell you much about the animals, I asked my CCL (for you newcomers, that’s Cantankerous Cat Lady) to do a little research for me so I could learn a bit about these ugly creatures. She obliged.

I was relieved to learn that this first animal, the wildebeest, is a grass-eater. Good to know — he wouldn’t eat a cat, but he could step 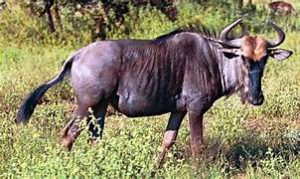 on one who wasn’t paying attention. I think small African cats probably stay away from him just because of his size.

Normally, these wildebeests live in large herds. They are strange-looking, because in the front they are quite hefty, but they have slim hindquarters and spindly legs.

They are sociable among their own kind. They are all territorial animals. Being a cat, I can understand that. We, too, are territorial, and want our boundaries honored and respected.

Because they migrate in a big circle of 500 – 1000 miles, they travel in large groups for protection. They are not camouflaged or well-armed, so there is safety in numbers.

I took one look at the next animal and knew he was one I would avoid entirely! He looked like a goofy-looking vicious dog. I knew if I saw him, I would run far, far away.

He is called the spotted hyena. He is also known as the laughing hyena, as he can produce many sounds. These include a whoop, grunt, groan, giggle, yell, growl, whine or squeal.

Now, that’s a lot of noises! All I’d need to hear is one laugh from that animal and I’d be running for cover. I don’t think there is anything funny about him, except maybe his looks.

Though the laughing hyena can hunt for himself, he likes to eat others’ leftovers. I suppose that is a good thing, as he can clean up messes left by others.

When he hunts, it is normally with a small group. Then they can take down big animals, such as the wildebeest. I wonder why that wildebeest would even talk to a creature who might eat him. I guess the author couldn’t have his characters eating one another, 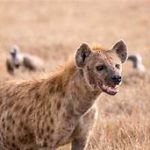 because it would be hard to write the book if they did.

Anyway, the hyena would make short work of me, if he could catch me. With his strong jaws, he could bite right through my bones.

The next creature in this book of horrors is called a lappet-faced vulture. This guy turns out to be a huge, ugly bird.

I asked CCL about the wrinkled pink skin on his face. She said those are called “lappets.” They are large, fleshy folds of skin. They make the vulture look very scary.

This bird would definitely eat me. He is known as one of the most aggressive birds in Africa. With his extremely strong beak, he can rip off skin, tendons, and coarse tissue that other predators can’t manage. He can strip a small antelope carcass to the bone in 20 minutes. 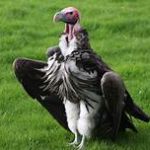 So, how long would it take him to rip me apart? Two minutes, maybe.

I am very glad we have none of these birds in Alaska!

Then the three uglies come upon a warthog, rolling in mud. Just like a pig, he likes getting that wet dirt all over him. I’m told it cools him. If I had to roll in mud to stay cool, I think I’d choose to burn up instead.

The poor thing! There are bumps, called warts, all over his face. And, he has two sets of short tusks, instead of one. CCL says those allow him to dig in the ground for roots and such.

This animal, as large as he is, would not be interested in me, as he eats grass, roots, and bulbs. Nevertheless, I would not get anywhere close to him.

The warthog does not like to fight, but will run from danger, just as I would run from him. They like to run backwards from an attacker, because then the aggressor will have to face those two sets of tusks.

There was a hitch in the plan when Creator made this one. The warthog has to kneel to eat. He has a short neck and really long legs 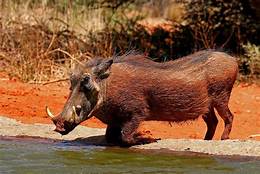 . To make eating a bit easier, he has developed knee pads on his knees so he can kneel comfortably.

Well, it would be nicer to meet this one while he was kneeling. I could probably run away before he even got up from those padded knees.

There is one last ugly animal in this book, and I do believe he is the worst one yet. He’s called a marabou stork, a rather pretty name for a created monster.

This bird is huge! If anything could convince me to break my habit of eating birds, this monster might do it. He stands 60 inches tall — CCL says that’s five feet — almost as tall as she. He only weighs about 20 pounds, but has a wingspan of 11 feet.

This bird has been given the title of ” the ugliest animal on the planet.” I can see why. He has a large bare throat sac, colored pink, and, as the book says, it’s “all dingly-dangly.” Does he use that sac like a suitcase, to hold extra food?

He has a long neck and long skinny legs. I don’t know how he even holds those huge wings up. Why doesn’t he tip over? 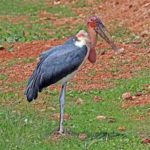 What is really gross about this bird is that he poops on himself to cool down. Yuck! I think I’d rather burn up than to do that to my lovely body! At least, I’d think you’d be able to smell him from a long way off, and therefore avoid him. 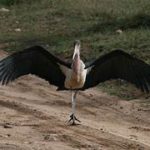 If he gets cold, he just spreads those gigantic wings and the sun warms them. He mostly stands around a lot, as he can’t fly very well.

He likes to eat things that are already dead, though he will also eat small creatures, like frogs. I’m sure if he could catch me, he’d eat me in about four bites. (He can eat 2.2 pounds of meat in a single bite.)

Of course, he would have trouble catching me, unless he flew after me. However, after reading this book, I have decided Africa is the last place I’d want to go, so I probably am in no danger from the marabou stork.

So, these five ugly animals travel along, singing their ugly song. Then they reach their homes, and there, hiding in holes and trees, are all their little ones. The little ones have a different song to sing.

They sing about how they love these five animals, and how, in their eyes they are beautiful. That is good, as it improves something the two-leggeds call our self-image.

Still, I am glad I am not in Africa. Reading a book is scary enough for me. Being able to read puts foreign ideas in my head. Why would I want to go to Africa anyway? I hate to travel. I hate to leave my daily routine and my comfortable home. I think I’ll just stay here. You two-leggeds can go to Africa if you wish.

If you would like to scare yourself, you can order a hardcover copy of this book here.  Click on the image or on the highlighted book title, and you will be taken to where you can purchase the book. Please note: As an Amazon affiliate, I may earn a small commission from your purchase.

6 thoughts on “Lucinda Writes About Ugly Animals in Africa”