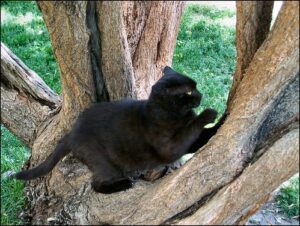 Perhaps you can’t herd cats, but you can send them out in twos or threes as part of an army of undercover agents. Their job description: Find and kill the enemy — rats. This clever plan provides Chicago rat control an important service.

Developing this idea can be credited to the Tree House Humane Society, through what they call their “Cats at Work” program. In this program, the society places two or three cats outside of homes and businesses as a way to keep the rodent population in check.

Launched in 2012, Tree House has created a solution that helps trapped, vaccinated, and spayed or neutered cats who cannot return to their former colonies. Often the building where they lived has been demolished or the colony location has become dangerous.

According to Orkin, United States pest control firm, Chicago has come in first on their list of top 50 rattiest cities for the sixth consecutive year in 2020. Placement of rat-killing poisons, gassing, and traps provide short-term solutions only. Also, laying poison can endanger pets and children

The “feral army” plan seems popular, as there remains a long waiting list of people and businesses who want a feral cat team. The list will carry the program forward for

People who want to participate in the program apply and then pay a fee of $165 per cat to have the cats placed outside their home or business. Tree House provides insulated outdoor shelters, litter boxes, outdoor heating pads, plus a heated water bowl to keep drinking water from freezing in Chicago’s chilly winters.

The property owner has the responsibility for providing their cat team with food, clean water, and medical attention if necessary. The cats do not come inside, but patrol the perimeter of their new territory. They do kill some rats, but Tree House says that “often their pheromones are enough to scare rats away.”

In such a large city, rat control becomes an important consideration, as rats are responsible for spreading more than 35 different diseases worldwide. According to the U.S. Centers for Disease Control, these diseases include plague, hantavirus, and multiple types of hemorrhagic fevers.

The pandemic has created an unprecedented year for rodents. With restaurant closures, they have had to find new sources of food, according to Orkin Pest Control. Without food waste to consume, rats scavenge new areas and exhibit unusually aggressive behavior. It has become even more important to find ways to control rats and mice in home or business.

Besides providing a vital service, this “Cats at Work” program can well give a feral cat

a new chance at life. Since they often cannot be released back in their original territory, providing them with a place where they are cared for but still have their freedom keeps them from living indefinitely inside a shelter or perhaps facing euthanasia.

Often these cats live a better life after their placement in their new home territory than they ever did on their own. With a cozy outdoor shelter to live in, food and water, they have all they need to thrive.

In fact, they even have a registered caretaker whose job entails ensuring that the animal has food, water, and shelter. Thus, this cat often receives far better care than the nonexistent, do-it-yourself care he had formerly, when he had to fend for himself.

The Humane Society says the only cats used in this program consist of the ones who would not do well in a home after being adopted or who cannot return to their former living area.

A story in WGN News tells us that more than 1,000 cats have been released onto Chicago streets since the program’s beginnings in 2012. Sarah Liss of the Tree House Humane Society says, “We’ve had a lot of our clients tell us that, before they had the cats, they’d step outside their house and rats would actually run across their feet.”

Apparently, Chicago does not hold the exclusive rights to this scheme of using cats to fight the rat problem. New York City’s Feral Cat Initiative helps volunteers care for what they term “community cats.” They launched a program at the Jacob K. Javits Convention Center in 2016 with feral cats, having the same purpose: help keep rats out. 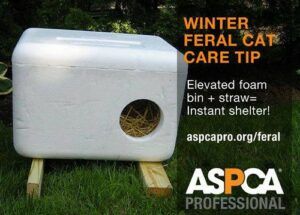 Since Tree House created the Cats at Work program, they report on their website that often these feral cats become beloved members of the family or team. In fact, some of them even have their own Instagram page. Quite a reversal of the cat’s life story!

Cats have developed an interesting history over the centuries. In the days of ancient Egypt, the cats discovered large populations of rodents infesting the grain supplies. With so much food available, it is understandable that these vermin drew the cats.

It might be said that the cat contracted with the Egyptians, exchanging the killing of the grain-destroying vermin for food and shelter. Thus, they domesticated themselves in a sense, and certainly became well-regarded, and elevated to god/goddess status by the Egyptians.

Then, in the Middle Ages, the status of cats reached a new low. They became associated with witchcraft, and received the reputation of becoming tools of the devil.

Some sources online cite the massive killing of cats as a reason for the Black Plague, as there were then not enough of them to keep the rats in control. Some online sources argue that this mass destruction of cats did not occur, so the popular argument that with more cats, the Black Plague would not  have occurred, has no validity.

Perhaps so, perhaps not. We can’t go back and find out.

Cats Have Wide Range Of Experiences

We see, though, that the cat has traveled through a wide range of experiences over

the course of history, ranging from god/goddess status to  receiving the dubious title of “tools of the devil.” Meanwhile, the cat just goes on living as a cat, and making the best of its situation.