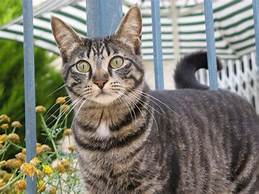 Hello, all — it’s your CCL (Cantankerous Cat Lady) here. I am giving Lucinda the literate cat a break for today, and will do my best to take her place. Today I am sharing memories of cats who have owned me in past years.

When I first heard of blogging, my understanding was that you got a website, purchased a domain name, and then wrote in your blog on any subject you wished.

Now I have learned that you pick a subject, or a niche, for your blog theme and all your posts should address that subject. As cats have always interested and intrigued me, it made my choice easy.

As you might remember, I am growing old now. I turned 81 this year. I have had cats in my life since childhood. As Lucinda says, “No wonder she is cantankerous, as she has been owned by cats for most of her life.”

Because of this long experience, I class myself as an expert observer of cat behavior. I have seen my cats do many odd things, and have long wished they could speak in English. When my cat looks at me and says, “Meow,” I don’t always know the translation.

I thought it might be fun to post memories of some of the cats in my life, from early days to present. I’m sure I’ll forget some of them, but chalk that up to my age.

In my early years, my father had a favorite cat. I wrote about him in one of my first posts. He had definitely bonded with my dad, and spent many hours in his company.

The cat’s favorite time of year came when they harvested corn. The workers went out first, cut all the corn, and gathered the stalks into large standing bundles.

Once they bundled all the corn, the men would come by with a truck and load all the bundles in the back. The cat, who had arrived for the harvesting in my dad’s truck, now took his place on the field.

As each bundle of corn was moved, mice, who had settled in underneath, came 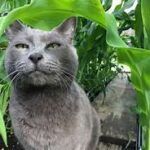 running out. The cat immediately went to work, catching and killing as many mice as he could. My dad picked up the dead mice and put them in his large coat pocket.

On the ride home, the cat sat next to my dad in the truck, and regularly reached in my dad’s coat pocket, pulled out a mouse, and ate it, thus disposing of the collected carcasses. It resulted in a great harvest for both man and cat.

For my first nine years, I lived in Connecticut. My Aunt Mary (my mother’s sister) lived with her family in the same town, and she had several cats. She had one remarkable kitty that I loved.

He was a big black cat with an undercoat of white. This white appeared in a cloudy pattern along his sides, so she named him “Smoky.”

My parents moved to a cattle ranch in Colorado, and I didn’t see Smoky for a few years. Then we moved to Englewood, Colorado, where I went to junior high and high school. My aunt followed them to Colorado after her husband died, and Smoky and I were reintroduced.

Then, when I got married, Aunt Mary gave me Smoky for a wedding present. The cat and I had a good journey together for a few years, until I had to move.

Shortly before the move, I had traveled to the East coast and back, and had to leave the cat with a friend. Then, I came home and immediately moved across town. It was all too much change for the cat. When we finally got settled in, one morning he escaped and disappeared.

I never found him. The pound didn’t have him. He was gone. I am sure he decided that all that moving around had become too much, so he found a home more to his liking.

Smoky had a sweet personality. He was gentle and loving, a large cat who preferred a soft bed to energetic activity. By the time I got him, he must have been getting old, but was in very good health.

Still, he never took much interest in vigorous activities, though he did like being outside. However, he never did anything that could be classified as undignified. Like some people, his main claim to fame came from physical beauty. Because of his unusual appearance and gentle disposition, he really need no other recommendation.

When my parents had the cattle ranch, of course we had cats, along with dogs, horses, cattle, a pet rabbit, and at one time, a pet deer. There were two cats who lived in the house, and when the female had kittens, the male became the mother cat’s assistant.

For some reason, the mother cat moved her kittens more than once. The male happily did his part to assist. He would help her by carrying one of the kittens for her. This assistance made the job go much faster. He was a good daddy cat.

When I married a second time and moved to Pueblo, Colorado, where my husband taught at the college, we got a kitten. I don’t remember where it came from, but it was in bad shape. It had been abandoned at too young an age, and we had to bottle-feed it.

I had a sheepskin toilet seat cover. Fit into a shoe box, it made a perfect bed for the kitten. The sheepskin formed bottom and sides that were warm and fuzzy, and the kitten loved it. It first drank from its bottle, then “nursed” at that sheepskin, sucking the fur and making kitten biscuits.

We discovered it had some kind of spinal injury, painful to the touch and making its back legs rather weak. Still, we nursed it and loved it, and it grew up.

The kitten had a grey tabby coat with black stripes. We gave it the original name of Tiger. It grew into a medium-sized cat, quite mobile in spite of its spinal injury.

My daughter from my first marriage, Sandi, lived with us. She and Tiger developed a strong attachment. They often played “hide-and-seek” together. We lived in a split-level house, and their game centered around my daughter’s upstairs bedroom and the kitchen.

I don’t know how they decided who would hide first, but they had pre-chosen hiding spots. Sandi’s was her bedroom closet. She’d run in there and close the sliding door.

The cat would run up the stairs and go right to the closet. Being a clever beastie, he’d slip a paw under the door and slide it open. When he would see Sandi, he’d run 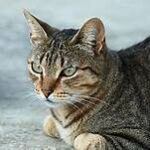 He had his hiding place in a kitchen cabinet. He could open the door, get in, and pull it mostly closed behind him. Of course Sandi would find him, and race off upstairs.

The game took place fairly regularly. Then, in an unforgettable tragedy, my daughter drowned. Believe me, such an event is one from which you never quite recover.

The cat also took it hard. He couldn’t understand why we came home without Sandi. He’d sit for hours outside her bedroom, hoping she’d return.

I don’t think he really recovered until after I gave birth to my son. I was pregnant when Sandi died, and the new baby came seven weeks early. I think he hurried up his arrival to help ease the pain of my loss.

Tiger adopted David. Though they couldn’t play together as the cat did with Sandi, he liked to be close to the baby. Somewhere I have a picture of the two of them sitting in a chair together. David is about four months old. The cat has his paw on David’s little hand, like he’s holding it. Very sweet!

My, my, I’ve gotten carried away! That’s enough reminiscences for this time. Perhaps on another day I’ll give Lucinda a break and write some more.

At the end of this post, if you’d share some favorite stories about your fur babies, I’d love it. We all like cat tales, so please share one or two. We will all appreciate them.

5 thoughts on “Your CCL Shares Memories Of Cats”