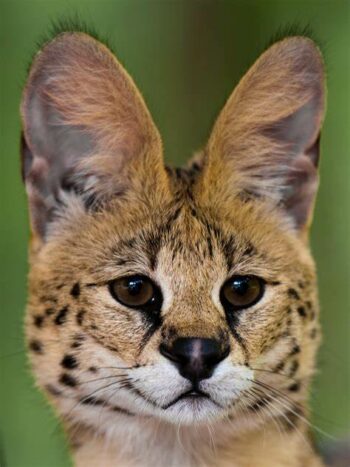 The spotted serval cat, an African wild cat, looks a bit like a leopard, yet it is the sole member of the genus Leptailurus. Though some states allow you to raise a serval cat in your home as an exotic pet, the animal will need extra room to play and a diet of whole prey.

In many places, it’s illegal to own one of these cats, and licenses, permits, and inspections might be required in others. I can understand why. The cat will prove a difficult pet in many ways. First, he must have a large enclosure in an outdoor location that stays warm year-round.

The enclosure needs to be fenced on all sides, and fencing should extend a few feet underground. The top of the enclosure must be covered…effectively creating a large cage. A pool of water provides a place to drink and a place to swim. You might even stock it with fish.

The serval does not make a suitable indoor pet because it is so large and quite active. Also, it likes to jump. It can break things and perhaps be harmed by them. It cannot be fully litter-trained, as it marks territory by urinating on objects and walls.

A large animal, the servals might reach up to two feet tall at their shoulders and could weigh as much as 40 pounds. They appear sleek and slender, with relatively small heads and large, rounded ears. Because of their long neck and long legs, they have earned the nickname “giraffe cats.”

The tail grows shorter than most domestic cats, in relation to their body size. Coats are generally golden-colored, with black spots and lines. The belly is white and the eyes are amber. Yes, it looks lovely, but will not make an easy family addition.

Both male and female kittens become sexually mature when they reach the age of one to two years. The female usually comes into heat once or twice a year, unless a litter is lost. Then she might come into oestrus sooner.

Gestation lasts for two to three months, and then the litter of one to four kittens is born. Kittens’ eyes open after nine to thirteen days. Weaning begins a month after birth. The kittens will stay with their mother until about 12 months of age.

This cat is active in both day and night. It might become most active in early morning, around twilight, and at midnight. On cooler or rainy days, they might remain active for a longer time. When the heat of midday arrives, they rest and groom themselves.

The serval can walk as much as 1 1/4 to 2 1/2 miles every night, and often have special trails to reach certain hunting areas. The cat remains solitary except during mating season. Then, the pair does not stay together long; however, kittens stay with their mother for their first year.

What About The Diet?

This cat, of course a carnivore, will eat a great variety of prey. Suitable choices include rodents, birds, reptiles, frogs, and insects. They catch most of these by leaping high in the air and pouncing. They can also use those long front legs to reach into burrows or to catch a fish.

The animal locates prey by its excellent sense of hearing. When the prey comes into range, the big cat can remain motionless for up to 15 minutes. Then it jumps with all four feet and can jump up to 13 feet in the air. Once the prey becomes incapacitated, the serval bites it on the head or neck.

If you keep a serval as a pet, preferably feed them live prey, so they can pursue and devour it as they would in the wild. Although there is a formulated pellet diet available, it should serve as an addition only, as their health will decline if the bulk of their meal does not include fresh protein.

Enjoy this video of a serval, showing the incredible jumping ability of this cat.

Perhaps A Hybrid Makes A Better Choice Of Pet

In April of 1986, the first savannah cat was born. This animal is a hybrid between a male serval and a female domestic cat. This cat, larger than a typical domestic kitten, had a coat pattern resembling that of the father.

A good thing: The savannah seems to have inherited a few domestic cat traits, such as tameness, from its mother. As the savannah has gained status as a breed, it can be owned and raised as a pet with no restrictions. It’s certainly a safer animal, especially if you have children.

What Are The Risks Of Having A Serval?

This cat adapts much better to life in the wild. You might expect to find it in the African grasslands, its native habitat. Typically, it lives south of the Sahara Desert. Remember, it is a wild animal that has specific needs that must be met, not always easy in a new location.

The serval needs a large, zoo-like area to explore, swim, hunt, run, or perhaps climb. It can be rather expensive to create such an area. If the enclosure is not sturdy, comfortable, and roomy, your new pet may escape.

Your serval will require a special diet. You can’t get by just giving this cat some commercial cat food. He needs variety in his diet, which he would get in the wild. Any variety of meats or fish might be suitable.

This cat will not become a sweet, docile lap cat. Though the serval does not normally become aggressive toward grown humans, and can indeed be affectionate, you must remember that it is still a wild animal with basic instincts to fulfill.

Because the serval classifies as a wild animal, many states and countries restrict ownership. You must hold the proper licenses to own this cat.

This cat likes to hunt at night. Here’s a good reason to keep this animal, whose average weight comes in at 29 pounds, in an outside enclosure. What if he has a play-hunt in your house at 3:00 a.m. and leaps on you as you sleep? A rude awakening!

He likes to mark his territory. He might pee on any household item, or even on you! And, if you have a litter box for him, it had better come in an extra large size. One owner commented that, though he did will with his box, he still liked to pee on things around the house. If she told him NO, he would slap her, HARD. She says he was extremely stubborn.

If you have small children, do not get a serval cat. They play using teeth and claws, and may view children as toys or prey. Though not likely, it’s possible. One of my references mentions that the cat, apparently jealous of the baby, attacked it. The baby had teeth marks on her temple and next to her eye. They found a good home for that cat.

The serval plays hard! Besides knocking over large items or scratching and tearing furnishings, this strong cat with fast reflexes uses teeth and claws during play. Though they may not mean harm, they can cause it just because of their superior strength compared to a domestic cat.

Canine teeth of a serval have a bite force of 172 Newtons, not something you want to experience. Compare it to the bite force of domestic cats of 56 Newtons.

Remember, this cat jumps in the air and lands on prey. They then hold it, usually delivering a fatal bite to the neck. Consider them the best hunters in the cat world, with a nearly 50% kill rate. Compare that to the domestic cat’s kill rate of about 10%.

Consider Carefully Before Choosing A Serval

If you choose this cat, you take on a big responsibility. Average life span of a serval in captivity is around 22 years, as compared to around 15 years in a domestic cat. You will have to have a good source of prey in a variety of flavors.

Also, you need to find a vet who can care for him, as he is basically a wild animal. He needs the same care, such as immunizations and de-worming, as a domestic cat. Some ordinary small animal vets don’t want to deal with the serval.

One of the common medical problems you could have with this cat is its ability to swallow foreign objects. When these become lodged in the throat or prove difficult to pass, a vet’s assistance may become necessary, to prevent the animal from choking.

This breed of cat will not appear on my wish list. I have enough trouble with my present small, domestic cat, who likes to bite and pounce. Besides, it’s too cold for the serval in Alaska — he would not like our climate. If you choose to acquire a serval, best of luck to you!