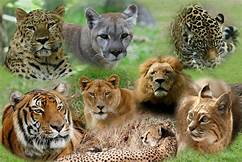 All cats, from wild and savage hunters to the sweet pet curled up by your fire are related. No matter the size or markings, the rounded head and agile, light-footed body immediately mark the animal as a cat. Somewhere in the animal’s distant past, all cats evolved from a common prehistoric ancestor. Wild cats vs. domestic cats: yes, they are all family.

There are certain internal anatomic features that are characteristic. Also, almost all cats have 38 chromosomes in each cell, though a few exceptional species only have 36.

Meet Members of the Cat Family

The well-defined cat family is called the Felidae. The family is within the order Carnivora and the class Mammalia. Within this family, cats are further classified into groups called genera (singular is genus.) Within each genus are separate species, which are the basic units of classification.

An animal is assigned to a separate species if it does not normally interbreed and produce fertile offspring.

Though there is disagreement among the experts, most scientists recognize 38 cat species. These include the domestic cat.

One important feature used to classify these animals into genera is the structure of the hyoid bone at the base of the tongue. In the lion, leopard, tiger, snow leopard, clouded leopard and jaguar, this hyoid bone is partially made 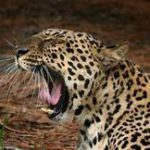 of cartilage. Therefore, the vocal apparatus is able to move freely, enabling these cats to roar. This big roaring cats are usually grouped in the genus Panthera.

In all other cats, this hyoid bone is fully ossified and rigid. These cats cannot roar. All but one of these species are generally grouped together in one genus, Felis. These cats are commonly called small cats, even though one member, the puma, as large as the leopard.

The one exception is the cheetah. This animal has claws that do not retract fully. Because of this difference, the cheetah has been placed in it’s own genus, Acinonyx.

Some Small Differences Cause New Classifications

Sometimes the experts disagree, and have broken the Felidae down into more genera. For example, the clouded leopard is sometimes placed in it’s own genus, Neofelis, because it has very large upper canine teeth.

The lynxes, having short tails and tufted ears, may be grouped in the genus Lynx instead of Felis.

Meanwhile, the ocelots and Geoffrey’s cat, having 36 chromosomes, are sometimes classified as Leopardus. Other divisions of the small cats may be made because of marginal differences.

The size and detailed characteristics of the body structure of wild cats are the result of evolution. The development of a particular cat fit it to take advantage of a particular size and kind of prey.

Apart from the male lion’s mane, cats show very little difference between the sexes. Males, though, are usually slightly larger.

Because cats walk on their toes, their legs are lengthened and they can run faster than they could if they were flat-footed. Though swift, they cannot keep up a high speed for very long. Therefore, they like to ambush their prey.

Because of it’s flexible and powerful body, the cat can creep up on it’s victim and suddenly leap on it. The only cat that will pursue it’s prey is the cheetah. This cat can achieve 63 mph (100 km/hour) in bursts — faster than any 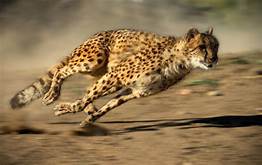 The cheetah reaches this fast speed by swinging it’s long legs from the waist and using those non-retractible claws to give it a good grip on the ground. It can also make rapid turns.

All cats have five toes on their forepaws and four on their hind paws. There is a pad at the base of each tie and a larger pad in the middle. These pads allow the animal to move quietly as it stalks it’s prey.

Both large and small wild cats often live in forests and are good tree climbers. From a tree the cat can drop on it’s prey. To do so, they need a fine sense of balance, and are able to use the well-known righting reflex when they jump from a tree.

To hunt efficiently, all cats have highly-developed external senses. The most important are the ears and eyes, as they often hunt their prey at dawn and dusk. At these times their sharp hearing and sensitive sight give them an advantage over other animals.

Though their sense of smell is well-developed, they do not track their prey by it’s scent. However, they use this heightened sense to detect signals from other cats.

Color and markings of wild coats have developed in such a way as to camouflage them from their prey. Therefore, their particular markings bear some relationship to the environment where they live.

Spotted cats, such as the leopard of jaguar, usually live in forests. The tiger’s stripes conceal it in long grass. The dry and brown African Savannah is the home of the tawny=colored lion. 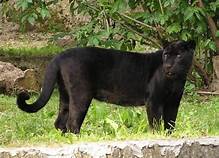 The puma, with similar color, often lives on the North American prairies. In some wild cats, such as the leopard and jaguar, one can see a variation known as melanism. This melanism produces a dark, almost black coat. Also, there are white tigers that have blue eyes. Their white fur has light brown stripes.

Wild cats can be found in all kinds of habitats except for treeless tundra and polar ice. They all have periods of inactivity interspersed with forays in search of food. They eat as much as they can, and can consume up to one-third of their body weight at one sitting. Then they might go without food for days.

Most cats in the wild are solitary, and will keep pretty much to their own territory. Sometimes a single male and several females may live together in a certain area of land, though they remain apart outside the mating season. 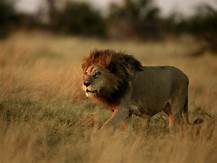 The lion is the only exception. Lions live together and maintain a hierarchy for breeding purposes. In general, a new male lion takes over the duty of breeding about every two years. This insures that new blood occurs in every second generation. This genetic variation keeps the species stronger.

Young males eventually leave to set up their own pride. However, away from the support of other males they have a lower chance of survival than the females.

Mating Brings The Males And Females Together

In other cat species, males and females come together only to mate. The females alert the males that they are ready by spraying their urine on certain spots within their territory.

The male “woos” the female by secreting a scent that stimulates her. A period of courtship, complete with moments of tenderness and lovers’ quarrels, often started by the female, follows.

Wild cats mate like domestic cats. The male mounts the female and grips her by the scruff of the neck with his teeth.

Gestation periods vary from one species to another. In general, this period is nine to sixteen weeks. Litter size also varies, depending on species.

The newborn are blind at birth like domestic kittens, but they do have fur. Their care is left entirely to the female. Once they are old enough to follow their mother, they quickly learn the technique of killing their prey.

These young cats stay with their mother for at least six months before they become independent. Some remain 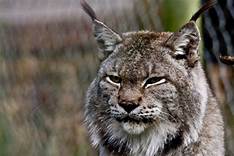 with the mother for more than a year.

Hunting Styles Between Species Will Vary

Each species of cat has a slightly different way of hunting. Their sequence of action will relate to the behavior of the prey.

The urge to hunt is hereditary. The young cat will play with anything that moves. This movement provides the stimulus to attack.

Before they leave the protection of their mother, they must perfect their hunting techniques. These include hunting, stalking, pouncing, seizing, immobilizing, and killing. They must perfect these skills before moving out on their own.

Most smaller cats kill by severing the prey’s spinal cord with their canine teeth. Lions generally jump onto the prey’s haunches and break its back. Tigers go for the throat.

Though the offspring may be fertile, they seem to have other characteristics that are either domestic or wild. These three species though closely related, have kept their species status.

In captivity, different species have been interbred and may produce unusual hybrids. In most instances, however, 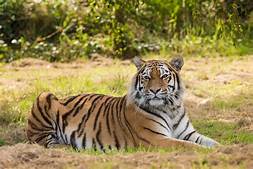 these offspring have been sterile. The hybrids exhibit characteristics of both parents.

Your cat may seem tame and well-mannered, but don’t forget that your sweet pet is not too far removed from it’s wild ancestry. If it sometimes seems like it has some wild ideas in it’s fuzzy head, they come from a well-documented history.

Information for this post came from one of my favorite references, The Book of the Cat, by Michael Wright and Sally Walters.

2 thoughts on “Wild Cats vs. Domestic Cats: Are They Related?”