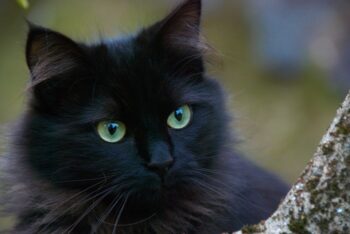 Black cats are a tradition in my family. Though I have shared my household with a variety of cats of different colors, most often I’ve had a black cat.  I became curious — What is the symbolism of a black cat?

Black cats are not a specific breed.  Rather, they have genetically produced black fur pigmentation.  There are more male black cats than females, and most of them have stunning golden eyes.

Depending on what country you are in, a black cat can be either evil or wonderful.  In Scotland and Ireland, they are regarded highly.  Having one in your home could bring prosperity.  In Japan, a single woman owning a black cat is said to attract numerous suitors.

In Germany, they say that a black cat walking toward you or crossing left to right can grant you wishes.  However, the rest of Europe did not regard the black cat in such a kindly fashion.  In western superstitions, the black cat was a witch’s familiar.  He represented bad luck, including  potential death.

In the time of the witch hunts, black cats and their witch companions did not fare well.  The cat was considered a demon or perhaps another witch who had shapeshifted to avoid capture.

Pope Gregory IX said that black cats were a link to the devil.  This belief led to the burning execution of over 900 cats in France.

Sailers and fishermen, however, treasured black cats as lucky.  If a cat lived in a fisherman’s home, 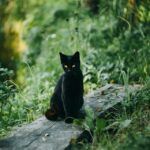 his energy was said to protect the fisherman while at sea.  On the ship, of course they were valuable, because they caught rats who carried disease or destroyed cargo and food supplies.

The British vessels all believed that a black cat would bring them luck and ensure a safe voyage home.  Some cats have been remembered in maritime history, such as Tiddles, who traveled more than 30,000 miles while he was with the Royal Navy.

Then, of course, in Egypt, cats were venerated.  The cat goddess, Bast, was a black cat.  She was the overseer of protection.  A black cat in an Egyptian home was thought to win Bast’s favor.

It is interesting that King Charles I adored his black cat.  When the black cat died, the king declared his good fortune was gone.  Interestingly, the king was charged with treason the very next day.

There are even special holidays set aside for black cats.  In Great Britain and Ireland, October 27 is Black Cat Day.  In the United States, August 17 is known as Black Cat Appreciation Day.

According to the ASPCA, though in shelters, euthanasia numbers for black cats are some of the highest, the total number of adoptions is also the highest.  The belief is that there are simply more black cats than other colors.

The black fur gene has three variants:  solid black, brown, and cinnamon.  Often a solid black cat who receives heavy exposure to the sun can change color to being a rust brown cat.  My cat is such an animal:  When you see  him in bright sun, you can see the brown pigment in his fur.

Actually, the mutation that causes a cat’s fur to be black is in the same genetic family as the genes

that give humans resistance to diseases like HIV.  Some scientists believe that their color is closely related to disease restriction.

If you are born with a black cat as your totem animal, you might find that the world has an enigmatic facade.  Your life will seem, somehow, to be put together well, even though it looks chaotic.  Some believe that the black cat totem belongs to a person with unfinished business from a previous life.

If you have a black cat totem, you tend to be a risk-taker.  A word of warning:  use caution.  Though your senses are keen, and particularly your vision, your playful, curious nature can get you into trouble.

You may have a passion for napping and snacking.  You need to remember to eat healthy snacks so you don’t become overweight.

The color black represents authority, elegance and adaptability.  With this totem,  you can become a wonderful leader who rarely loses your dignity when under pressure. 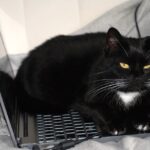 In Native American beliefs about black cats, if the cat comes to you in a vision, it has a teaching that you need to heed.  Black Cat’s lessons focus on independence, intuition, and becoming involved in the supernatural.  You may well gain insights into your sensual side.

In Celtic mythology, there is a large black cat with one white dot on his belly.  In folk tales it is claimed that this cat can claim souls before they move to their final resting place, unless the cat is distracted by mourners with riddles or music.

When you see a black cat in your dreams, it is a symbol of your feminine side.  It can mean several things:  The message can be that you should be more playful and mysterious, or it can act as an astral guide between dimensions.

Sometimes this black cat in your dreams represents your insecurities.  If you are kind and tender with the cat, you may soon receive a nice gift or an act of kindness.

When you are thinking of adopting a black cat, think of these things:  This cat looks sleek and

sophisticated, and will make you look slimmer when you hold it.  The cat goes well with any decor, and you won’t need a lint brush when planning to attend a black-tie affair.  Adopting such a cat may bring you incredible good luck.

I’m certainly a staunch supporter of black cats.  The many I have shared my home with have all

been exceptional beautiful animals, very loving and devoted to me.  I feel I have been fortunate to have such wonderful companions.  They have blessed my life.

Here are the references I used for this article:

Just for fun, I’ve added a few items you can purchase from Amazon with a black cat theme.  As an Amazon affiliate, I will earn a small commission if you purchase one of these products.

Wintek Over the Door Hook Hanger

7 thoughts on “What Is The Symbolism Of A Black Cat?”