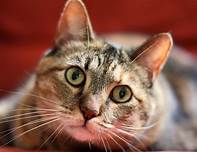 Do you know about cats and overgrooming? I certainly do. When I picked up my 15-year-old cat, Pogo, at the shelter nine months ago, he had a number of health issues, one being very obvious.

He had pulled all the fur off his stomach and in lines down his legs. He had no fur on his ears — they looked like parchment. He had been in the shelter for a little over seven months.

My cat is very skittish and runs and hides under the bed at the slightest provocation. (In fact, when I

first brought him home, it took me two weeks to convince him to sleep on the bed, not under it.) I learned when I got him from the shelter that there is a feline overgrooming behavior called psychogenic alopecia. Pogo had it, big-time.

Why Do Cats Overgroom?

The shelter was clean and the people who worked there seemed to be kind and caring. But, as there are limited hours in a day and lots of animals to care for, they could only give so much attention to each animal. Not only that — the dogs at the other end of the building never shut up, and that in itself stressed the cat, I’m sure.

I read an article in thesprucepets.com that discusses this problem. The article gives a list of the reasons a cat might overgroom. When I read the list, I realized they could all apply to my cat.

The first thing the article mentions is permanent changes in the routine and environment. These include the absence of any family members. As the cat had lived with the same family for 13 years, I am sure this one was a big one. Cats are really into their routine, and losing the family and the home all at once must have been very hard on the kitty.

Now, here are the other reasons on the list:

Well, Pogo moved into a new place with many new animals to meet and get to know. He didn’t have just one — he had a roomful.

This one is pretty obvious. He had to adjust to a completely new environment.

Here again, in this new place, everything was unfamiliar. He had no connection to the life he’d known.

Well, of course, in the shelter, this one changed.

I’m not sure what this one implies — Toys? Favorite spots in the house? Someone to play with him or give him affection and love? I’m sure the workers at the shelter did their best, but they did not have time for much one-on-one attention.

Well, that’s a pretty good description of living in an animal shelter, if you are a cat. It’s hard to establish a routine in such an environment. 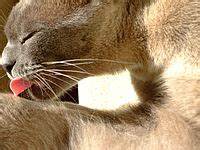 When the cat obsessively grooms itself, the result is hair loss and possibly skin sores. When the cat licks itself, he releases endorphins, which are neural transmitters in the brain. These endorphins make the sensation of self-grooming feel comforting. It makes sense that the cat would resort to such behavior.

Stress is not the only reason cats overgroom. There could be a medical reason. For example, if something causes the cat to feel itchy, he may overgroom as a way to try to stop the itch.

The itchy sensation could be caused by a number of factors, such as recent dietary or environmental changes. He could have allergies or fleas. If you think he might have an allergy, you can go to a vet dermatologist, if there is one in your area.

The article pointed out that one sign of overgrooming is a line or strip of very short stubble that looks like a buzz-cut. I found such a patch on my cat after I brought him home. It was a round spot on his chest. That spot, though, has now grown back.

How Do You Stop This Behavior?

First, determine if it is a medical condition causing the behavior. This might necessitate a visit to the vet. If you can figure out why your cat is anxious, by removing the cause, he might recover on his own.

If it is stress-related, here are some things you might try:

1) If the cat is missing someone he loves who is absent, ask the person to give you an unwashed shirt or blanket. The smell might comfort the cat.

2) If you are introducing a new cat, do so gradually. The stress of a new family member could cause nervous licking.

3) Establish regular play-time with your cat. Sometimes enjoying a romp with the catnip mouse or chasing a string or laser light can take the cat’s mind off his stress.

4) Try Feliway, which is a spray or plug-in pheromone product. Since it has a similar scent to the one cats naturally produce, it can relieve stress.

The article suggests that if the cat is exhibiting excessive licking behaviors, it could require an anti- 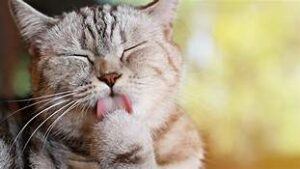 anxiety drug until he breaks the cycle.

I didn’t use a drug for Pogo. Instead, I showered him with attention, and kept his environment as calm as possible. He sleeps with me in bed at night, and for the first few months, he’d wake and start licking himself.

I am not even sure if he was fully awake. When he exhibited this behavior, he often appeared to be at least half asleep. I think he somehow believed he was back in that place — it was like a recurring nightmare.

When he’d start licking in his half-asleep state, I’d stroke him very softly and talk to him in a low, comforting voice. Soon he’d stop licking.

It was almost like he’d realize he was no longer in that place, so he didn’t have a reason any more to be stressed. Soon he’d relax and go back to sleep.

Be prepared — if you can help the cat to overcome his alopecia. That is good, but the behavior may return. If so, you will know that something is stressing your cat a great deal, and perhaps you can discover the reason.

Now that he is out of the shelter atmosphere, my cat is again a happy cat. All his fur has grown back, and though he grooms every evening before sleep and occasionally during the day, none of it

He is such a sweet animal — I am happy that he is again stress-free and happy in his new home.

Information from this article came from thesprucepets.com/how-to-stop-cat-over-grooming-554052

1 thought on “Cats And Overgrooming”