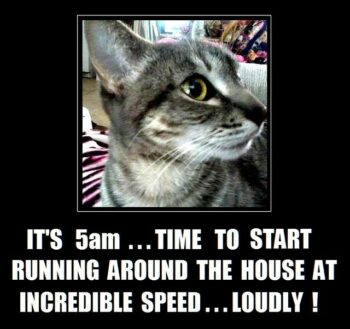 Have you ever asked, “What are cat zoomies?” Do you wonder why your cat races around the house in a furious burst of energy, with no apparent reason? These short bits of hyperactivity are known as the “zoomies,” but they also have a fancy scientific name: Frenetic Random Activity Periods, or FRAP for short.

Most of the time, these sudden mad dashes are a way to burn off excess energy. Creatures who sleep for so many hours a day may find them a good way to awaken mind and body. Also, since the cat is a natural predator, he may be imagining a wild chase.

Perhaps you need to provide kitty with opportunities for releasing all that pent-up energy. The importance of doing so could prove quite valuable if it allows you undisturbed sleep.

Since cats are crepuscular, meaning they are most active at dawn and dusk, they may choose these times to practice their zoomie technique. It helps them release all that pent-up energy, but it hinders you from gaining a full night’s sleep.

A way to help diminish this behavior is to spend more time each day playing with them. Thus you give them a way to rid themselves of the excess energy in a constructive way. In the course of play, try to capture the thrill of the hunt for them with wands or other moving toys.

Mocha loves to run, and he expends so much energy chasing his toy springs around the house that he doesn’t have excess to use on zoomies. If you can, find a toy that captures your cat’s imagination and allows him to engage in a pretend hunt. Both of you might sleep better.

It’s a good idea to set aside two 10-minute play sessions per day minimum. If you work full-time it might be difficult to find the time, but it’s very important to spend adequate time playing with your cat. It will help him release energy and banish depression.

Note: I had trouble finding images of zooming cats because of copyright restrictions. So, have added two pictures of outdoor cats, demonstrating the zooming technique.

Are your cat’s zoomies more frequent than they used to be? She may be suffering from anxiety for some reason, especially if this behavior is not ordinary. Have you recently moved, gotten a new pet, or made some change in her schedule? These could all lead to anxiety.

You may be able to help relieve her anxiety by offering more frequent play sessions until she becomes her normal self again. Have you tried a Feliway dispenser? I’ve had to deal with cat aggression since Mocha moved in.

If he tries to bite, I leave. I’ve plugged in a Feliway dispenser in the bedroom, and I do believe it’s helped. Now, instead of attacking me first thing in the morning (his early idea of play) he comes up to me and sits down; lets me pet and scratch him, and purrs. Cats can learn.

Interesting, that when he first moved in, he did not purr. Now that’s changed, and I am very glad.

Your cat’s age will determine how much he needs to play. Kittens most likely need much more interactive playtime than older cats. You might need to give more playtime as well to a very active cat. (Mocha is a good example — Such energy!)

Kitty’s Age Can Make A Difference

Cat zoomies can take many forms. Perhaps your kitty likes to run up and down stairs. He may run laps around the house, roaring out from under the table, or jumping on and off your lap, all the while meowing loudly. Then, as quickly as the zoomies started, the cat relaxes.

Perhaps it would be a good idea to add an extra scratching post and a cat tree, if you find space for one. (I’m still trying to figure out where I’d put one.) These give the cat more ways to expend energy.

Can two cats get the zoomies? In Kodiak, Carlos and I lived in a 70-foot trailer. It had a long hallway from the kitchen to bathroom and bedrooms. Carlos and his friend, Tiger, would get in a tag game that encompassed the whole house.

They would chase each other at full speed from one end of the house to the other, under and over furniture; nothing slowed them down. They would race one way and then the other, until they were both tired. How great to have two cats who helped each other expend excess energy.

Usually, the zoomies represent a way to get rid of excess energy. but at times they might be indicative of a medical problem. If your cat’s zoomies become more frequent, it could be time to call the vet.

Does your cat ever zoom after using the litter box? This action is most common after defecation. One reason this might occur is because the litter box isn’t clean enough and the cat finds it unpleasant.

So, now you know — for the most part, FRAPs, or zoomies, are a normal way for your cat to release pent-up energy. Just be watchful to make sure there’s no other problem. More playtime can allow both your cat and you to enjoy a more restful night’s sleep.