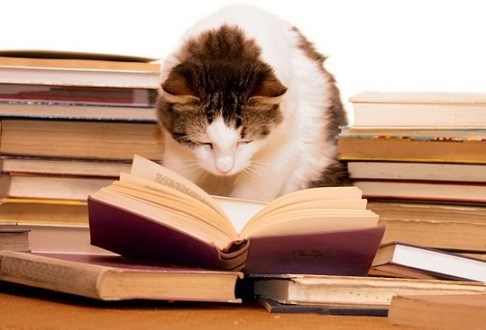 Yes, there are some unique cats in the world, and some of them break world records. This post and the included videos will give you a close-up view of a couple of these astounding creatures.

There are all kinds of cat record-holders. For example the Guinness Book of World Records tells us that the longest jump made by a cat that’s ever been recorded is 213.36 cm, or seven feet.

Can you jump seven feet? Consider a small cat. A furry feline jumping that far travels over four times its own body length. Gee, I can’t even jump one time my body length.

The cat, Waffle, made his record jump on January 30, 2018. Ten years old, in the prime of life, he made this tremendous jump from one kitchen stool to another.

It’s interesting to note this comparison. Among humans, the world record for the long jump was set in 1991 by Mike Powell. This jump was 8.5 meters, almost five times his own body length.

But seven times his body length? You must admit: That cat is pretty miraculous!

What about that lovely cat tail? So many long, wavy tails to admire! The record-holder for the world’s longest domestic cat tail belonged to a silver Main Coon named Cygnus.

His gorgeous tail measures 17.58 inches. The tail and the cat live with his family in Southfield, Michigan.

His name is Mymains Steward Gilligan, a.k.a. Stewie.

What about the world’s oldest cat? We have a number of contenders on this one. Creme Puff, a domestic cat from Texas, lived from 1967 until 2005, reaching the ripe old age of 38 years and three days.

Currently, Rubble, a domestic cat who lives in England with Michelle Foster of Devon, is the leader of the pack. Rubble was born in May, 1988. At the time the article was written, he was 31 years old.

An interesting side note: The owner of Creme Puff also owned a cat named Grandpa Rex Allen, who held the oldest cat record until he passed away in 1988.

Grandpa was said to have been born in Paris in 1964, and when he passed, he was 34 years and two months old.

Have you ever longed for more toes? The cat, Jake, holds the record for the most toes, having seven on each paw. Each toe has its own claw, pad, and bone structure. Now, there’s a cat with real scratch power.

Colonel Meow, a Himalayan-Persian cross-breed, would do quite well in a cold climate. This cat

There are even a few wealthy cats in the world. When reclusive antique dealer Ben Rea passed away in 1988, he left his cat, Blackie, seven million pounds in his will.

Interesting that Rea’s sister, Dorothy, left 2.8 million pounds to several cat charities after she died. I guess they were a cat-loving family.

How would you like to give birth to a litter of babies instead of just one or two? In August 1970, a Burmese with the high-falutin’ name of Tarawood Antigone gave birth to 19 kittens.

Fifteen of them survived — one female and 14 males. Now, that’s a big family The mother cat must have fed them in shifts.

A cat can produce many litters in her lifetime A tabby cat from Texas named Dusty gave birth to an incredible 420 kittens in her life. How did one cat raise so many kittens? She must have been an

excellent mother. Do you suppose she assigned some of the brood to babysit?

What about the tallest cat? That record goes to Arcturus Aldebaran from Southfield, Michigan. This cat is a Savannah, and stands at 19.05 inches.

Now, liking cats is wonderful. I do love cats. However, consider Jack and Donna Wright in Kingston, Ontario. These folks have 689 cats. That’s a lot of cats!

Where do they keep them all? The cats must have their own residence. Do those folks hire staff to keep litter boxes clean? How would one afford to feed so many cats? Perhaps they should check with Ben Rea’s estate for a possible loan.

It’s not enough to read about these cats — you need to see some of them. Therefore, I’m including a couple of YouTube videos for your enjoyment. Unfortunately, I could not find a video that showed several record-holders, but found a couple I thought you might enjoy. There are others on YouTube that you might search for.

Not all records are held by domestic cats. For example, the world’s fastest cat is the cheetah. Don’t try to outrace this wild cat. He can reach speeds of 70 m.p.h.

Perhaps you need a good mouser at your house. The Egyptians would have loved this cat. She worked for a living. Her name was Towser and she worked for the Glenturret Distillery.

During her life, this tortoiseshell cat caught 28,899 mice plus other creatures, such as rats and rabbits. After her passing, the distillery erected a statue in her honor on the distillery grounds. She was a hero cat!

These are some of the record-holders. I have not included them all. If you want to read more, here are the articles I used as references for this post:

I think many of you would agree that there is one thing that can’t be recorded, and that’s the most-loved cat. Many of us feel very close to our pets. They become like family.

It’s impossible to measure such love. It is important to realize that it can make our lives and our cats’ lives richer. It is not necessary or possible to measure love, but it is very good to know that we are enriching the cat’s life and also our own by these emotions.

Though this love and caring for these animals cannot be measured, perhaps your cat has some special quality or feature that can be measured. If so, send your information to Guinness, the chronicle of extremes. We would enjoy hearing about your special cat.