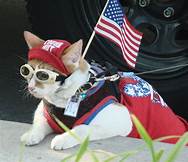 Happy Independence Day, everyone! If you have a cat, you can invite him to join in the celebration. After all, cats and independence go together quite well.

Terry Pratchett, author, is quoted as saying: “In ancient times cats were worshiped as gods; they have not forgotten this.” Of course, cats remember their glorious past. They began clearing out all the rodents from the Egyptians’ stored grain. The people were very pleased, and soon entered into a contract with the cats. “We’ll feed and house you if you destroy those rodents.”

Being very grateful to cats who saved their food supply, the people soon raised cats to god and 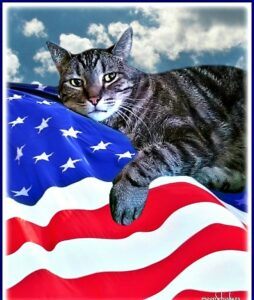 goddess status. After all, it was the cats who saved the day.

Now, cats feel just as important as they did in those long-ago days. They would like us to remember their glorious past.

Do you think you chose your cat? Wrong. Cats choose us, not the other way around. Even a shelter cat will be willing to be adopted, as a home would be much more pleasant for them than the shelter.

My last cat, Carlos, definitely chose me. I’d about decided to take him and was standing at a tall counter in front of the shelter office. Carlos, who was a “trusty” and allowed free run of the place, jumped up on the counter and laid down between my arms, which I’d laid outstretched across the counter top, and started purring.

He knew he wanted me, so he told me to take him home. Kristen Cast said, “Cats choose us; we don’t own them.” That lady understands cats.

Don’t you often want to do something but don’t quite have the courage to try? Or you will talk yourself out of it, to accommodate your fear.

Not a cat’s way. If a cat wants to do something, he does it. He is not motivated by “shoulds” or “shouldn’ts” — he just knows what he wants and goes for it. Jim Davis has it right. He says, “Way down deep, we’re all motivated by the same urges. Cats have the courage to live by them.”

Obedience is a dog thing. Cats will think it over and obey if they think it’s in their best interests. For example, if, when you call your cat, he is at a crucial point in an important hunt, he may not wish to be distracted. Eventually, the cat will respond out of curiosity, but not because they are obeying your call.

I had a card in my gift shop that said it all: “Dogs come when they are called. Cats take a message and get back to you.”

Another card I sold said, “Dogs have masters — Cats have staff.” It’s very true. The cat establishes a routine for the day and expects to be able to follow it. If something goes wrong, the cat is unhappy.

For example, he expects his staff to keep his litter box clean, always. If we miss a day, we may find that the cat has found another, unacceptable (to us) place to do his business.

He thought it was the best option available, since the box is dirty, but he has no understanding that your Persian rug is not the place for him to pee. His “staff” has failed him, so he takes matters in his own paws.

There are times when even an independent cat is indecisive. For example, I have a picture that shows a cat sitting right in the middle of an open doorway. The caption reads, “A cat is a creature who, when it’s out, wants in; when it’s in, wants out, and sometimes wants both simultaneously.” The cat in the doorway is merely maximizing his options.

We might find ourselves envious of the cat’s life. He has a schedule, made by him for his pleasure. He does not have to go to work, or run errands, or fix things. He simply lives the good life as he sees it. If he becomes too dissatisfied with the way things are going, he will just move out and find another home.

Rod McKuan understood. He said, “Cats have it all: admiration, an endless sleep, and companionship only when they want it.”

A cat does not hide this independence. He lives it. He lets us know what he wants in cat talk, and it’s up to us to figure out the message. He will not lie to you, but will tell it like it is.

Earnest Hemingway understood. He said, “A cat is absolutely emotionally honest. Human beings, for one reason or another, may hide their feelings, but a cat does not.” You know where the cat stands.

Nevertheless, the cat rewards his underlings for their service. If the care he receives meets all his demands, and he receives affectionate attention, he will love you unconditionally. You have proved yourself worthy, so in his kitty eyes you can do no wrong.

If your performance is substandard, your independent cat will bide his time until he sees a good chance to escape. He feels he can do better elsewhere.

However, if he accepts you and loves you, you will be reward with purrs, snuggles, bumps and rubs, nose kisses, lap snoozes, and a bagful of cat tricks that let you know he loves you. Then you become the ultimate kitty friend, and he thinks you are the perfect companion.

Charles Dickens had it right — he said, “What greater gift than the love of a cat?” I am sure that those of you who love and are loved by a cat would agree. Independent he may be, but he still has his ways of saying “thank you.”

So, enjoy your 4th of July holiday, and make sure you include your independent cat in the celebration. After all, it is his Independence Day too.