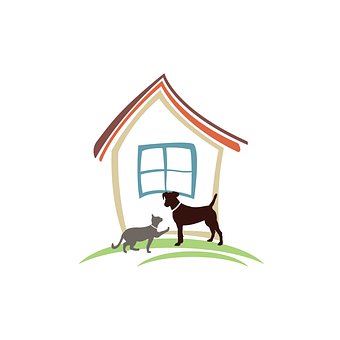 On my Alaskan homestead, the cat raised the dog.  It’s true — the dog was just a puppy when he arrived at my place, known as Banjo Beach, on Spruce Island.  He had no mother or father to teach him about the world, and the only other creatures there besides me were three cats.  He had to learn from somewhere.

THE CAT HAD EXPERIENCE ALREADY AS A NANNY

When you live in the Bush and your only neighbor is one-half mile away, you deal with daily life a bit differently.  In my case, I had three cats as my companions when I finally adopted a dog.  The Cat Elder was named “Sam,” but I often called him “Uncle Sam” because he had already raised two wild kittens.  Then I added a dog to the household, and, as there were only us five on the beach, Sam took on a new task — the cat raised the dog.

HOW WE FINALLY ADDED A DOG TO OUR LITTLE HOUSEHOLD

A friend of mine had found a litter of 12 puppies in the back of an abandoned pick-up in Kodiak.  She picked out the best of the litter and brought him to me.  He was about six weeks old and looked like a fluffy little teddy bear.  Someone suggested I name him Teddy Pup, in honor of a young Ouzinkie friend who was called Teddy Pan.

Sam and Teddy Pup became friends right away.  Sam took Teddy out and showed him all the choice spots on the property:  The

creek and beach; the “safe zone” under the house; the cat’s favorite spots in the woods nearby.  In the early days of their relationship, Sam never took Teddy too far away, as he must have felt the pup was too young to go far from home just yet.

The two played together.  The puppy, not realizing he could inflict pain on the cat, got a little rough at times.  One time I heard the cat yell and went running to his rescue.  The dog had bitten Sam’s back foot.  When I examined it, I found two puncture holes made by Teddy’s teeth, right in the flat bottom part of the cat’s foot.  Though he was hurt, he did not retaliate.

Another time, I heard the cat give a yowl.  When I went outside to investigate, Sam had disappeared.  He was gone for two days.  When he came home, he had a wound in his upper side.  The cat had found a safe place to hide and recover, kept the wound clean, and it healed nicely.  I believe the dog must have learned he had to be a bit gentler with the cat, because he never injured Sam again.

Sam taught Teddy to hunt.  They had one technique that was quite effective.  They chased some critter into a hollow log.  Then Teddy stood at one end and barked.  When the quarry ran out the other end, Sam, waiting nearby, grabbed it.

They sometimes went off to the meadow by the creek together.  More than once, I witnessed their return.  The cat strode along in the lead, carrying their “catch” in his mouth.  Teddy followed along behind, barking.  I am sure he must have been saying something like, “No fair!  This is a partnership.  You need to share that meat with me.  I’m going to call my union and complain.”

When Teddy Pup reached maturity, we all went to the wood together — one person, three cats, and a dog.  Then, the dog was on surveillance.  He would run ahead and check things out, making sure all was safe.  Periodically he’d return to check on us, and when he saw that we were okay, off he’d go again.  Meanwhile, the three cats explored the territory close by, climbing trees, looking under things, and playing in the tall grass.  When Sam got tired, he would run up the side of my leg like it was a highway, and stand on my shoulders, front paws on one shoulder and back paws on the other.  I would hold his tail to help him balance.

TEDDY EXERCISES HIS GREY MATTER — AND OTHER PARTS OF HIS BODY.

Teddy liked to learn tricks.  He knew the standard commands, (sit, lie down, come, or heel.)  However, he also received some advanced training.  I’d tell him, “Sit,” and then, “Say boof!”  Teddy would struggle to get out a single “boof,” and when he did, his front feet always came off the floor.

He also learned to roll over, a worthy accomplishment for a big dog.  Interestingly, he could only roll over in one direction.  If he started on the wrong side, he’d have to stand up and lie down on the other side.  Then he’d think about his move.  The hair on his back would start to turn before his body went into action. Then over he’d go.  He was always so proud that he had completed the move successfully.

OTHER ANIMAL INTERACTIONS KEPT ME AMUSED

The dog and cat had a game they played frequently.  The path to my house slanted down a steep hill to the beach and my cabin.  At the top of the hill, the two animals would race to the bottom.  I could almost hear the cat:  “Bet I can get to the bottom of the hill before you!”  At the bottom, Sam would run up a tree, leaving Teddy down below.  Sam’s telepathic comment to Teddy: “I won again!

When are you going to learn to climb trees?”

Sam Cat was a bit fastidious, being a cat.  Once while I was gone for a few days, my caretaker, Greg,

decided it would be easier to give all the animals water in one place, instead of taking the cats’ water upstairs.  So, he cut a bottom piece off a five-gallon bucket, making a water dish big enough for all four animals.

Sam drank his water there, but he didn’t much like drinking after that slobbery dog.  He would sit in front of the dish, and with one paw, sweep the water to one side.  A few swipes removed the dog impurities.  Then he would drink.

Teddy loved to walk to the village with me.  Usually trips were uneventful, though a couple of times some rough village dogs ganged up on Teddy.  Then I became the Mighty Dog Defender, and chased off the village bullies.  On the way home, I’d communicate commands to Teddy with hand signals, as I enjoyed the quiet of the woods.  A smart dog, he learned these signals easily.

Often when the cat and dog were together, Sam would raise up on his hind legs and rub affectionately against Teddy’s head.  Those two really cared for each other.  They were good friends their entire lives.  After all, since the cat raised the dog, they bonded as family.