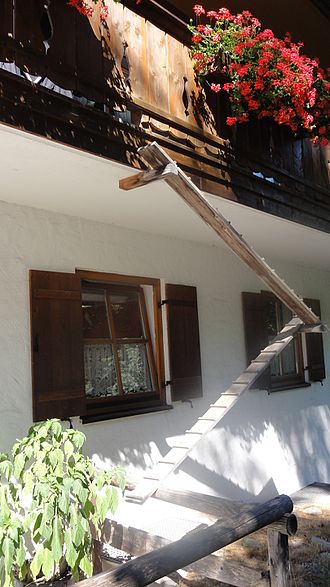 Most cats living in the Swiss mountains spend a lot of time outdoors. They do come inside, but to do so, often they must climb a scary cat ladder provided for them. These tall ladders, some traveling up several stories, lead to their access to the indoor world.

Climbing these ladders gives them great practice for scaling the Alps around them. The ladders build up stamina and endurance,  and the cats learn to negotiate some steep heights to reach their destination. 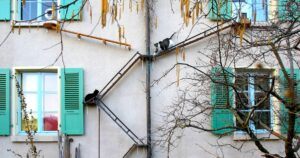 Thus, when they explore the alpine scene that forms their world, they are prepared for this adventure by their first high-rise climbing experiences, ascending and descending the narrow and steep cat ladder their owner has built for them.

I found just two pictures I could use, illustrating these ladders, so would like to encourage you to check out this link, newlyswissed.com/unusual-cat-ladders-in-switzerland/ You will see some amazing examples of these ladders, tested and now considered commonplace by the cats.

If you would like to build your own cat ladder, look at this video from YouTube. It is called “DIY Cat Ladder//Easy Woodworking Project. Then perhaps you can train your own cat to become a cat guide. At least, you will give your cat a great new way to reach the outdoors — or you can find imaginative ways to use the ladder inside the house.

Here is the video:

Once outdoors, the cat has the whole alpine scene to explore. Some of these cats learn a great deal about hiking in these mountains, and at times they can give assistance to human hikers on the trail.

With their ladder-climbing training they have no problem learning the nearby trails and tricky turns, and can furnish aid to the lost traveler.

Such an experience involved a cat from the alpine village of Gimmelwald and a Hungarian hiker.

The man became confused when he found the road back to the village closed. His confusion increased because he had sprained his ankle earlier and hobbled along, unfamiliar with his surroundings and unsure which way to go.

Because of his ankle, he traveled at a slow pace. He paused to rest, and a small tuxedo cat, exploring the nearby area, found him and came to see if the man needed his help.

After they became acquainted, the cat started walking, and kept looking back to make sure the man would follow. He led the hiker straight to the path that returned to the valley and the village.

Once the cat escorted the man safely home, they said farewell, and the cat, his escort service completed, headed off on his own.

The hiker later learned that his furry guide belonged to The Mountain Hostel.  Other guests there have remarked on their acquaintance with the cat. Perhaps the hostel would do well to advertise their Swiss Mountain Cat Guide Service.

The cat would at least enhance their business, as people would want to learn more. After all, cats have the reputation of being able to find home from great distances

Note: This video replaces the one I originally chose, because the owner no longer gives permission to share it, and has taken it off all websites that copied it. Therefore, will replace it with the one below, which, unfortunately, leaves something to be desired. However, it will give you the general idea.

Even a cat can become lost and confused, though, as this next story will show. In this case, the cat joined a pair of skiers climbing Mt. Britsen, with a 10,000 foot summit.

Cyril and Erik Rohrer heard a cat in the dark forest at about 4:30 a.m. They had skied to the 1200-meter level, when the cat, sounding really scared and confused, called to them. She joined them and would not leave.

As the cat refused to go away, the two kept skiing the trail with the cat following. She must have felt that being with people who seemed to know their location would provide a better choice than wandering aimlessly, unsure of where she needed to go.

Poor kitty’s paws became raw from the freezing snow, but she would not leave the hikers. At times they carried her, to give her a much-needed rest. Thus they made it to the summit with the cat as a witness to their success.

Finally, the Rohrers found a group of hikers headed back down the mountain. These good people took the cat with them, and when they reached the village, found kitty’s family and returned their furry wanderer to them. It turns out she had been “lost” for four days.

Earlier in that time she had joined another group who didn’t help her, and she did not make it back down the mountain.

Animals can amaze us. They are tough and resilient and can survive in situations that seem impossible for such a small creature. They do not give up easily. We can learn valuable lessons from their determination and persistence.