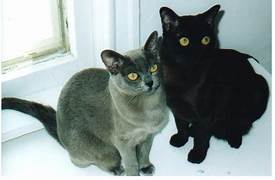 In this post you will read some basic bits of Burmese cat information.  Burmese cats can be distinctive and appealing in appearance.  The cat has an alert, wide-eyed look and a sleek coat done in rich color.

Are These Cats Popular?

Though not a common breed, it is one that is sought after.  This cat was the first pedigree breed that has been developed completely in the United States.

This cat has been subjected to a thorough genetic study.  Interesting, though that the breed standards of British and American Burmese are widely different.

For years the CFA in the United States recognized only the original sable (brown) cat as being a true Burmese.  The United States CFA now classifies some of the  newer colors under the breed name Malayan.  Also, ideas of the ideal body as well as the head shape are different in Britain and the United States. 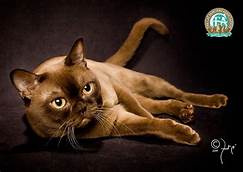 All the modern pedigreed Burmese can trace their ancestry to a single walnut-brown female.  Her name was Wong Mau.  She was taken from Rangoon to the United States in l930.

At that time, no similar cars were known, though historians of the Siamese have described an all-over chocolate-brown cat seen at 19th century shows.  These cats could well have been an early Burmese-Siamese hybrid.  Ancient Thai manuscripts also describe and show illustrations of such a cat.

Wong Mau’s owner was a Navy psychiatrist, Dr. Joseph Thompson.  He was first attracted by her unique coloring, though other cat fanciers were not impressed.  They thought of Wong Mau and her offspring as poorly-colored Siamese.

Dr. Thompson teamed with a few other breeders and geneticists and began a controlled breeding program.  The intent was to investigate the genetic make-up of Wong Mau and establish a new breed.

Since there were no similar cats for mates for Wong Mau, she was bred with the closest-available breed, the Siamese.  Then there were crosses between the offspring and back to Wong Mau herself. 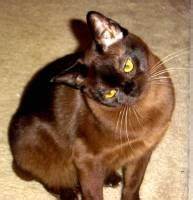 Over generations, Wong Mau’s descendents were made up of three types of kittens.  There were those that had the typical Siamese coloring, with dark brown “points” and a pale body.  Then there were those like Wong Mau herself, with a much darker body but still further darkening of the points.  The third type was dark brown all over, the first true Burmese.

These and further breeding established the existence of the Burmese gene.

During the 30s and 40s, Dr. Thompson as well as other breeders developed the Burmese into a pedigreed breed, first recognized by the Cat Fancy Association in 1936.

Then a few more cats were imported from Burma so that inbreeding could be reduced.  However, since not many Burmese were available, some breeding with Siamese was necessary.

In the 1950s,the first kittens were exported to Europe, and brown Burmese were recognized by the GCCF in Britain in 1952.  The blue Burmese was recognized in 1960.

Since then, the breed has become well-established on the European continent.  They are particularly popular in Germany, Holland, and Scandinavia.  They thrive in Australia and New Zealand, wherre they are especially noted for their rich golden eye color.

Conflict On The Continents

There has never been agreement between North American breeders and those of Britain, Europe, Australia, and New Zealand, as to what a Burmese cat should look like.  Wong Mau herself, and the Siamese used for breeding at the time, were much more round-headed than modern show Siamese.  The American standards have always emphasized this roundness.

In Britain and in some other countries, a moderately wedge-shaped head was considered the ideal.  This shape was certainly not as narrow as in the Siamese, yet much more foreign-looking than in North America.

All breeders agree on medium-sized, widely-set ears with rounded points.  The American show standards call for 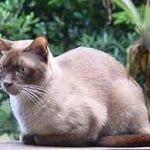 round eyes.  However, British judges prefer a more oval shape.

Though these differences are small, when the two cats are placed side by side, they look quite distinct.

There is agreement on the coat.  It should be short, dense and glossy; shiny and fine in texture.  All cat organizations agree that brown (or sable, in the United States) is the prime color of the breed.  The mature Burmese is a rich, warm shade of sable brown, with a slightly lighter color on the belly.

The blue Burmese (or the Malayan, as it is called in the United States) has a coat of soft, silver-grey, shading slightly on the tummy.  The rounded parts have a distinctive silver sheen.  The tone is much less blue than in other blues, such as the Russian.

This recessive gene probably was transmitted into the Burmese line from the early Siamese breeding programs.  It could also have come from the early cats imported from Burma.

Other colors developed in two main groups.  The chocolate, known in North America as champagne, and later t 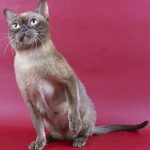 he lilac, a dilute color, first were bred in the United States in the late 60s and early 70s.

The kittens of both these colors are almost white at birth.  It is sometimes difficult to tell a chocolate from a lilac until they are a few weeks old.  As they grow older, these colors will darken.

The second new group of Burmese colors were based on the orange gene, and include reds, creams and tortoiseshells, colors developed mostly in Britain.  These colors came from breeding three different sources.  One was a short-haired ginger tabby; one was a red point Siamese, and one a tortie and white farm cat.

By the 1970s, color coats as free from tabby markings as possible had been developed.

By the mid-70s, British breeders of the new color groups felt that interbreeding would help improve the body type of both groups, as well as creating a further range of colors.  As a result, chocolate torties and lilac-cream torties had  been bred.

These additions made the Burmese among the most varied in color of all pedigreed breeds in Britain, Europe, Australia, and New Zealand.

As yet, however, none of the North American cat associations recognize all these colors, even under the name Malayans.  Even in Britain, some breeders still regard the brown (and possibly the blue) as the true Burmese.

All breeders and owners of Burmese worldwide agree as to their temperament.  These cats are athletic, brave, and humorous.  They have extraordinary ingenuity, and are unusually adaptable.  They are equally at home in a city apartment or in the country where there is good hunting.

They can catch and eat quite large rodents.  In southern England one time, two Burmese herded a duck into their owners’ home.  Fortunately for the duck, they did not eat it.

They can play for hours with home-made toys, such as rolled-up pieces of foil.  They are boisterous, but do not have the nervous Siamese temperament.  Some are extrovert and some are shy, but all are affectionate and very appealing.

Females first come into heat at about seven months.  When they mate, they bear about five kittens, on average.  Very many Burmese live for 16 to 18 years or even more.

Some breeders raise long-haired Burmese.  These cats are unusual because they combine silky long hair with the shaded brown tones of the Burmese.  They are born a paler color, and the sable coat and long hair develop gradually.  Born with blue eyes, these change color, going to grey and then to the adult golden color.

Then there is the Bombay.  This cat, all black, was produced by mating a black 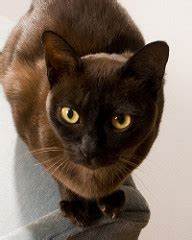 American shorthair and a sable Burmese in 1958.  The resulting offspring were black but with a fine, silky, sleek short coat, like the Burmese.

These Bombays are sometimes referred to as mini panthers, because they appear to be a miniature of the black leopard of India.  They have been described as “a patent-leather kid with new-penny eyes.” A coppery eye color is preferred by breeders of these cats.

Beautiful cats, the Burmese.  If you are looking for a special animal, see if you can find a breeder who has Burmese cats, and take a look.  You may have found the cat of your dreams.

This information came from my favorite cat reference, The Book of the Cat. If you would like to purchase your very own copy of this wonderful book, go to the following post:  Presenting My Ten Favorite Cat Breeds. Here you can order the book from Amazon.  Remember, I earn a small commission from qualifying Amazon products.

If you liked this story, or have questions or comments, please put them in the comment section below this post.  If you have a special request for an article about cats that you would like to see, you can also ask in the same comment section.  Enjoy!