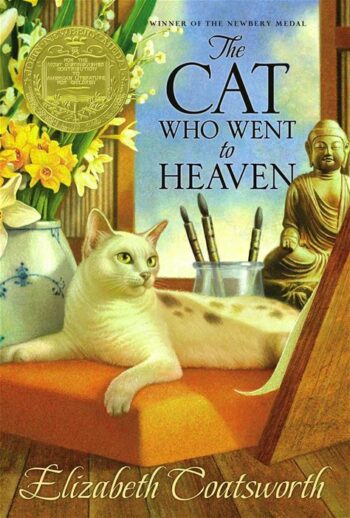 Greetings, two-legged readers, and thank you for visiting our website. My CCL (Cantankerous Cat Lady) has given me a new children’s book to review. This particular book talks about a cat and heaven, and may teach you something about the Buddha.

The book was written by Elizabeth Goldsworth, with the title, “The Cat Who Went to Heaven.” The story takes place in Japan, where a poor young artist sits in his house and paints.

He awaits his housekeeper, who has gone to the market with their few pennies to buy them something for supper. Because he wants to eat, he awaits her impatiently. He has not sold a painting for a long time, and fears they may soon starve.

When the old woman returns, she has no food, but instead has brought home a cat because she believes the cat will relieve their loneliness, and may bring them good luck.

At first the artist becomes angry, but then his curiosity gets the better of him, and he asks the housekeeper to let the cat out of the basket she carries.

When the artist sees that the cat has a white coat with yellow and black spots, he becomes less upset, as he has heard that three-colored cats are very lucky.

The little cat won him over by her lovely appearance and her contented purr. The housekeeper suggests they name the cat Good Fortune.

The kitty reminds me of the story CCL recently wrote about cats in Japanese culture, and the little ceramic statues of cats called “maneki-neko.” These cats represented many good qualities to the Japanese.

The traditional combination often found on these cats is calico, a white cat with gold and brown spots, just like Good Fortune’s coat.

This color combination in a maneki-neko represents the luckiest of all the color combinations. The white brings happiness, purity, and positive things. The gold spots represent wealth and prosperity, while the black spots tend to ward off evil.

The days go by while the artist paints. The little cat eats as little as possible and spends hours with lowered head before the image of Buddha. The housekeeper says the cat is praying.

Then, one day the artist sees the cat leap from the garden shadows and catch a bird. Then the cat hesitates, and slowly lifts its paws from the bird and it flies away.

The artist knows the cat must be very hungry, but when he sees this action, he believes she shows great mercy.

Just then, the housekeeper appears, excited by a visit from the head priest. What can he want?

The artist sends the housekeeper on the run to buy tea and rice cakes, giving her the last thing of value he owned, a vase that he always filled with a spray of flowers.

The priest then explains that they desire a painting of the death of Buddha for the temple. They couldn’t decide which artist to choose, so put their names on pieces of paper and laid them before the central image of Buddha.

In the morning, all the pieces of paper had blown away except the one with our poor artist’s name on, so they knew in the temple that Buddha wanted him to do the painting. Since they knew the artist was poor, the priest left him with a first payment.

Now the artist spends days imagining the life of Buddha. He meditates and paints him on the silk banner where the artwork goes. He remembers all the animals who have given of themselves to honor the Buddha, recalling stories about their love and sacrifice, and paints each one on the banner as well.

As he paints each animal, the cat, Good Fortune, comes out to admire them, but becomes sadder and sadder as the days pass. The artist remembers that the cat, being so independent, went off hunting and did not come to honor Buddha at his death.

Before he paints each animal, the artist remembers some story about it and why the Buddha loved it. A few of the animals challenge him, but he finds a reason to include them all. The little cat becomes very sad and cries and cries because she is not included.

Finally, hearing the cat crying sadly, he says, “I cannot be so hard-hearted,” and he adds the cat. He decides if the priests refuse his artwork because of the cat, let them do so, and he can starve.

When the cat came in to see the picture, she gazed at the artist will all her gratitude in her eyes. She became so happy she fell dead, too happy to live another moment.

Now, that idea interests me greatly. As you may remember, we cats do not think about death. We live in the moment, and think and act in the now. We simply focus on what is happening in the present, and when death comes, we just let go and leave life.

You two-leggeds worry too much, and you spend too much time thinking about the future. We do not have that luxury, as our lives pass by so swiftly it makes no sense to spend any time worrying about what might happen later. Doing so wastes valuable bits of life, and we cannot afford to do that.

If you do have to think about death, wouldn’t you find it nice if you could die from happiness? What better way to leave this earth? So much better than dying from illness or violence. I recommend a happy death.

So, what happened to the poor artist? The next morning, the priest, hearing the painting was done, came to see it. He asked why the artist added the cat. He said that the cat rebelled against Buddha, and thus did not have his blessing and couldn’t enter heaven.

The priest said that each person must suffer the consequences of his own actions. He said he would take the painting and tomorrow he would burn it. The housekeeper wept all that day because she felt she had brought the cat home and ruined her master.

The artist thought about how much he had put into the painting, but now he was ruined. However, he did not regret what he had done. He had lived for many days on thoughts of love and sacrifice, so he found he could not suffer when he’d given Good Fortune her final wish.

Early the next morning, all the priests from the temple came rushing to his house, and cried for him to follow them to the temple. When the artist saw his painting hanging with incense and candles before it, he sank down on his knees, crying, “O the Compassionate One.”

Where the cat had been, the white silk seemed as if it had never been painted. Instead, the Buddha he had painted now had one arm stretched out in blessing, and under his hand knelt a tiny cat, head bowed in adoration.

Love and compassion — wonderful two-legged ideas, that have the power to change the world. These qualities become two of the better aspects of your make-up, and I commend you for recognizing their importance.

If you would like your own copy of this sweet book, here’s a link to Amazon, where you can purchase it. If you do, my CCL will receive a few cents’ commission, and your price will not change. Every little bit helps, when it’s time to buy cat food.

2 thoughts on “New Book Review: Lucinda Writes About A Cat And Heaven”