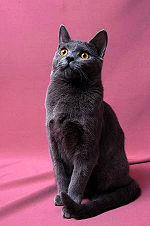 A wonderful creature is the Korat: cat from Thailand. This cat comes with a long history, set down in legend. The cat is a natural breed; its coloration is a silver-blue.

The Korat’s Thai name is Si-siwat. The cat appears with this name in “The Cat Book Poems,” a manuscript at least 300 years old, and thought by some to be as much as 600 years or more. This book is now held at the National Library of Bangkok.

In the poem about this cat, the author describes the Korat’s smooth coat. The description rhapsodizes this fur, “with roots like clouds and tips like silver.” The author goes on to describe the eyes as being “like dewdrops on a lotus leaf.”

Cat lovers in Thailand believed that the silver-tipped coat and vivid green eyes would lead to good fortune. A Korat was given often to brides as a token of a prosperous marriage.

We are told that King Chulalongkorn of Siam, king from 1868-1910, being very fond of cats, gave the Korat his name, after admiring one of them. Though the cat originated in the Korat province of eastern Thailand, it can be found throughout Thailand, even though it is relatively rare.

The Korat received its first mention in the west at the National Cat Show in London in 1896. There, the description called it a “blue Siamese.” A traveler brought the cat back from Thailand. Unfortunately, it did not qualify for the show because of the color, considered wrong for a Siamese.

The west heard no more of the Korat until 1959, when a pair named Nara and Darra made its way to the United States, imported directly from Thailand. Interest in the breed then grew.

In 1964 at the Empire Cat Club, the Korat made its official United States debut. By the next year, a larger number of Korat owners formed a breed club. Within five years, recognition had been granted by all the United States cat fancy organizations, as well as in Canada, South Africa, and Australia.

The first Korat arrived in Britain in 1972, and Britain recognition of the breed followed in 1975.

In order to preserve the breed’s integrity, breeding controls on this cat are unusually strict. Out-crossing is not permitted, and every Korat’s ancestry must be traceable back to Thailand. The importation of any Korat is carefully documented.

Characteristics of the Korat

This cat has a semi-cobby body build. He is a medium-sized cat who is supple and muscular, with a rounded back. His forelegs are a bit shorter than his hind legs, and his paws are oval.

The male should have a more powerful look, while the female is smaller and dainty. The medium-length tail tapers to a rounded tip.

His heart-shaped head has a semi-pointed muzzle. The chin is strong, as is the jaw; neither square nor pointed. There is breadth between the ears and eyes.

The upper curves of the head are formed by the eyebrow ridges. His cheeks curve gently down toward his chin.

He shows a slight nose break, with the tip of the nose just above the leather showing a downward curve. Ears are large, rounded at the tip, and their location high on the head gives the cat an alert expression. These ears should be open at the base, showing little hair inside.

The brilliant green eyes should be large and luminous. They are set wide apart. When open, they should appear well-rounded, but slightly slanted when closed.

The coat of the Korat is in a single layer, being short to medium-length. This coat should be glossy and fine, lying close to the body.

The silver tipping should have no shading, markings, or white hairs. This silver tipping becomes most intense where the hair as shortest. These areas include the backs of the ears, the nose, and the paws. Paw pads on this breed may be either dark blue or lavender-pink.

What Is The Korat Temperament?

This cat makes an affectionate pet. He is appreciative of petting and enjoys playing with his people. If you like a quiet and gentle cat, this one is for you. However, they do not like sudden loud noises, and thus are not the best choice for a home with young children or noisy dogs.

Caring For The Korat

Because of the short, smooth coat, grooming is minimal. Be aware, though, that the cat is vulnerable to respiratory viral infections, known as “cat flu.” 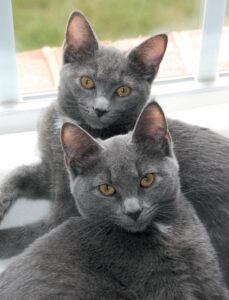 The kittens in a litter usually number three or four, but there could be up to nine in the litter. At first, the kittens’ coats are not as sleek as in the adult cat, and it may take a few weeks for the amber-green color of the eyes to appear.

Be prepared to wait for your Korat to reach full development. That perfect, sleek and glossy coat and a proper vivid green eye color can take from two to four years to appear.

If you are looking for a rare breed with a gentle, calm temperament, perhaps this is the cat for you.

The reference I used for this post may be purchased from Amazon. Please note: as an Amazon affiliate, I will receive a very small commission for this book. Your price will not be affected.

6 thoughts on “Meet The Korat: Cat From Thailand”