Welcome, two-leggeds. It’s Lucinda the literate cat. As you know if you read my recent column, my CCL is involved in a very time-consuming venture, and has appointed me to be her assistant editor for the year to help her out.

She recently said to me, “Lucinda, we need a new book review. Would you mind summarizing a few more of the stories in that excellent book, Super Cats?”

When I asked the CCL which stories she wanted me to review, she said, “You pick them. Share some that you really like.” Therefore, this week you get my choices, like it or not. Since I am selecting, I will treat you to stories of cats helping other animals.

The first story is about Sammy, a tabby cat. She lived with Izzy, a terrier mix pup, and their two-leggeds in Toledo, Ohio.

The cat and dog tolerated each other, but weren’t really close. Izzy liked to chase Sammy, and I can tell from experience, that being chased by a dog is not necessarily fun. However, the two may have had an agreement between themselves that they would play a game of “chase the cat.”

My CCL told me she had a cat and dog that liked to play this game, and when they came home to her woodland homestead, when they came to the last big hill before home they always had a race, dog chasing cat. At the bottom of the hill the cat always ran up a tree and then laughed at the dog because he couldn’t climb. They loved 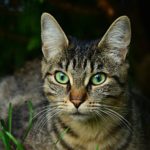 In Sammy and Izzy’s game, it ended that same way. The cat ran up a tree, and the dog could not follow. Since two-leggeds cannot understand communication between four-leggeds, they didn’t know that the cat and dog had a pact. They enjoyed the game, and though they appeared to be enemies, they were indeed friends.

One day a strange dog came in their yard and attacked Izzy. The family ran out to try to save their dog, but the large visiting dog had Izzy in his teeth. Enter Sammy.

He puffed his body up big the way cats do when they prepare for attack. He hissed and gave appropriate battle cries. These got the stray dog’s attention. He dropped Izzy and started chasing the cat. The family then had time to get Lizzy.

She was badly injured, but Sammy rescued her in time to save her life.

I really think Sammy and Lizzy had an agreement to play the race game. It was good practice for the rescue mission, as Sammy knew just how to get away from that dog.

Cats are protective of their family, two-legged or four-legged. Part of the reason Sammy lured that dog away from Izzy had to do with territory. That dog did not belong on Sammy’s turf. The cat made his point and saved his family member in the process.

Christopher was hit by a car when he was just three or four years old. A group of bicycling two-leggeds found him and took him to the Redwood Vet Clinic. Though he had a fractured pelvis and could not stand, the vet helped him get well.

In the cat world, we often refer to the vet as the Cat Torturer, since it is such a frightening and sometimes painful experience to visit one if your are a cat. My idea of the vet has softened a bit since I now read a lot. I understand that those frightful people in that scary place or only trying to help us. It is hard, though, not to be afraid, since we don’t know what will be done to our poor cat bodies.

The clinic found that Christopher had no home, so they decided he could become the clinic cat. There he displayed an amazing talent for sensing what other cats needed. (Well, of course he could, because he was able to understand their communication.)

Often, a cat can understand, but chooses not to get involved. Christopher decided, since the clinic had healed him and then given him a home, he would be glad to work for them and earn his keep.

Christopher first saved the life of a little black kitten who was sick and weak from something called anemia. The 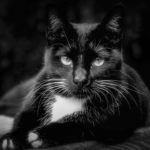 kitten needed a blood transfusion fast. (Now, there’s a new word for me. I learned that, with a sharp, hollow needle they could pierce the body of a cat and draw out blood, a liquid that flows through our body and feeds all parts of it.)

Then they could put the blood into another cat that needed some because he was sick.

It turned out the Christopher had the same rare type of blood as the little kitten. How did he know that? How did he figure out that he could help? I think he’d been in the clinic long enough to learn some of what went on there. I am not sure how he knew his blood was the right kind.

Christopher kept jumping up on the operating table, nuzzling the kitten and rubbing against the vet. Finally, she decided to try Christopher’s blood, because the kitten was near death anyway. It worked! The kitten recovered completely.

Christopher also took on the task of teaching some young feral kittens things they had not learned from their mother. He got in their cage and took over their training. He calmed them down and taught them the necessary lessons needed to grow up to adulthood in the world of the two-leggeds.

He was able to teach them that their aggressive hissing and growling was unnecessary. They had never been inside a building, much less around two-leggeds, so Christopher was an excellent teacher.

We cats are astute observers of the world. We have to learn many things in order to survive. We often know much more than the two-leggeds realize. Some day perhaps they will learn what valuable allies we can be.

Here is another story of a stray cat whose name was Scarlett. She lived in Brooklyn, New York, in an abandoned garage, where she had a family of five kittens. In March 1996, the garage caught on fire. A fireman on the crew trying to put out the fire noticed a little tabby cat carrying a kitten from the burning building.

The little cat returned to the burning building four more times. After her last trip, she touched noses with all five kittens to make sure they were all there; then she collapsed, exhausted and injured. Her paws were burned, her coat singed, and her eyes sealed shut with blisters because of the heat.

Then the fireman realized she had to do the nose count because she couldn’t see, but she could smell her babies. The fireman took the family to a vet clinic. Scarlett did lose one kitten. It was weakened by the smoke and died from a virus. Scarlett and the other kittens survived. After three months, they were ready for rehoming. 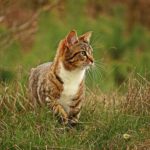 Scarlett went to life with Karen Wellen, who had recently lost her cat. Karen had gone through a bad traffic accident. She says, “The physical and emotional pain I suffered made me more compassionate, and I vowed if I ever allowed another cat into my home, it would be one with special needs.”

Though Scarlett needed special care throughout her life, she lived happily with Karen. She died in October, 2008. The North Shore Animal League, the organization that cared for Scarlett and her kittens, created the Scarlett Award in her honor, given to animals who engaged in heroic actions to benefit others.

Motherhood is a very strong motivator, both in two-legged and four-legged creatures. Motherhood can produce rare acts of courage. Scarlett’s actions were proof of the loyalty and care that cats, as well as other animals, give to their families. Large stories of courage can often be found in very small creatures.

When a cat is in motherhood mode, her predatory instincts become suppressed. Thus, when her kittens make high-pitched noises, she doesn’t eat them, but nurtures them instead.

Here is a story of such an incident. In County Offaly in Ireland, Ronan and Emma Lally lived on a farm. They wanted ducklings for their pond. They bought some fertilized eggs and waited eagerly for the ducklings to hatch.

Then one morning Ronan checked the eggs and found that the ducklings had hatched, but were nowhere to be seen. As he was searching, he saw a cat leap from the hayloft. Ronan feared that the cat may have found the baby ducks and eaten them.

The couple searched the farm. Then they saw one of them, but it was dangling from the cat’s mouth. At first they thought he bird was to become cat food, until they noticed the cat was carrying the baby duck very gently, as if she were carrying a kitten.

When Ronan and Emma saw that the cat returned to the barn, they followed her. There, they watched as she dropped the duckling gently into a nest she had created. The other two ducklings were already there. The baby birds nestled under the cat as she gently put her paws around them. 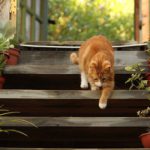 Emma remarked, “She was very content. She was purring and very loving toward the ducks.” Then and there, the couple named the cat Della.

When Emma went to pet the cat, she discovered that the cat had already given birth to three kittens. So, since her nurturing instincts were high, and she was already in mother mode, she adopted the three motherless ducklings.

Della cared for them and even nursed them until they outgrew the kittens. All of them lived together happily on the farm.

I love this book, because it gives the reader some idea of how exceptional a cat can be, and about cats’ unknown capabilities. If you want to order a copy for yourself, go to this post, where the CCL has already listed it for sale.

If you like these stories, we would appreciate a comment from you. Maybe you have an extraordinary story about a cat you know that you would like to share with us. We are always happy to have such stories, or any comments from our readers.