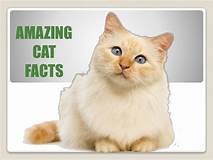 Here is another collection of strange facts about cats for you to enjoy. What interesting little creatures! It is my belief that there is a lot more to a cat than meets the eye. They are definitely unique. This collection is part of a larger one called 101 Interesting Cat Facts, written by Karin Lehnardt. The website is www.factretriever.com.

The origin of the word dates from the 1700s. The name came from a Middle English word, Clodder, which meant “a clotted mass.” Some crazy cat ladies keep a clowder of cats, but I am happy with one or two at a time.

2. A cat rubs against people not only to be affectionate but also to mark out its territory with scent glands around its face. The tail area and paws also carry the cat’s scent.

The cat just wants the world to know you belong to him, so he marks you like you are part of his territory.

3. Smuggling a cat out of ancient Egypt was punishable by death. Phoenician traders eventually succeeded in smuggling felines, which they sold to rich people in Athens and other important cities.

I doubt there is much cat smuggling going on today, though you never can tell what the future holds.

4. Cats are North America’s most popular pets; there are 73 million cats compared to 63 million dogs. Over 30% of households in North America own a cat.

They are so amazing and wonderful — I am glad to see they are now our most popular pet.

5. A cat can jump up to five times its own height in a single bound.

That’s pretty incredible! Can you imagine jumping five times your own height in one leap? Why, I could jump over our six-foot-high fence with no problem. No need to unlatch the gate, thanks — I’ll just jump. 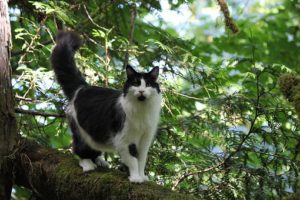 6. On average, cats spend 2/3 of every day sleeping. That means a nine-year-old cat has been awake for only three years of its life.

It’s really a good thing they sleep a lot, as it makes it a bit easier to keep track of them.

7. In the original Italian version of Cinderella, the benevolent fairy godmother figure was a cat.

I knew it! There really is some magic in the cat!

8. Cats don’t have sweat glands over their bodies like humans do. Instead, they sweat only through their paws.

I guess they will never need to use deodorant. Besides, they bathe so much that they don’t really need to worry about b.o.

9. A cat’s nose pad is ridged with a unique pattern, just like the fingerprint on a human.

I had no idea about this fact until I read this article. Makes me wonder if all animals have some kind of pattern somewhere that identifies them as an individual. What about dogs? Are their nose pads ridged the same way? So many questions, so little time.

10. Approximately 1/3 of cat owners think their pets are able to read their minds.

It sure seems like it — they seem to know things we wouldn’t expect them to know. I think it’s partly that they can understand more of our language than we give them credit for. Also, I’ve always believed cats communicate with each other telepathically, so perhaps they have figured out how to read our minds.

There’s your facts of the day. If you missed the first “cat facts” post, or if you have not had a chance to read it, never fear. Just click here to go to the original post to learn the intriguing bits of information there.

If you liked this post, please leave a comment below. I do enjoy reading your thoughts on these posts.