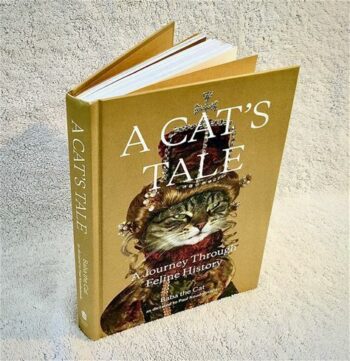 Hello, 2-legged readers, from your official kitty book reviewer, Lucinda the literate cat. I’m here to write a review on a book about the cats’ history. My CCL (Cantankerous Cat Lady) read this book and recommended I read it and give an opinion.

The book title: “A Cat’s Tale, A Journey Through Feline History.” It was dictated to Paul Koudounaris by his cat, Baba. How nice! Another cat writer! And what a great job she’s done on this book. It covers the history of us cats since earliest times right up to today.

Baba doesn’t mince words, either. She tells the whole story — the good and the bad — and, like me, she can’t resist making an editorial comment now and then.

The book kept my attention all the way to the end. Impressive, Baba! Wish we could meet some day and share experiences. Meeting another cat writer would please me to no end.

So Many Pictures Of You In Costumes

I do wonder about the pictures, Baba. Every time I turn a page, I see you in a different costume. I understand that each costume represents a different character from your story of history. Your two-legged had a good idea there.

However, we cats have a lot of pride in our fur coats. We spend hours keeping that coat clean and as beautiful as we can. But, the only picture I found of you without a costume, Baba, came right at the beginning of the book, a nice head and shoulders shot. I’d like to see a picture of all of you with no costume!

Regardless, the book offers good value. You will read about each chapter and a statement of what that chapter contains. If you would like to read this well-written cat history for yourself, you can click on the link at the end of this post, where you will advance to Amazon, and you can purchase your own copy.

My CCL will receive a small commission from your purchase. It will help her pay for cat food.

In the introduction, Baba makes the point that if you wish to learn about cats to help you understand them, it is important that you learn their history. Baba warns that the picture presented won’t always be pleasant, but she feels it important that you know the truth.

Bring it on, Baba!

The first chapter discusses “The Golden Age: Cats in Prehistory and Ancient Egypt.” This chapter

tells us about the early days of the cat, from his descent from Felis silvestris lybica, the small wildcat found in the Near East and North America, to his elevation to a near-godlike status in ancient Egypt. Do you know how that came about? Read this book to learn.

We cats tend to like to explore new places, if it is our idea. We managed to cross the Sahara desert, somehow, and ended up in Central Africa.

Even the prophet Muhammad honored us, describing us as pure animals. His own cat bore the name of muezza, which meant “cherished.”

I must tell you, I’m getting used to the pictures. They tend to illustrate the points you make when you write. Very clever of your two-legged! But, tell me, how did you two manage to accumulate so many pictures? Baba, did you find it hard to pose for all of them?

Did it take your two-legged, Paul, a long time to do all those pictures? Some of your facial expressions are so dramatic, and fit the costume so well — Did you find it hard to get just the right expression?

Traveling with merchant caravans, we cats explored all over Asia, and became known in India as well. In the book, you readers will find several cat stories from this area. And in Siam, you learn that they believed that at your death, we cats became receptacles for the human soul.

A bit of the history of Japan’s earliest cats tells us that even in Japan, we cats achieved great acceptance, and today the cats’ popularity in that country looms large.

Then came Europe, and at first all seemed well. However, by the 4th century, the Christians decided they wanted to break from ancient ways. Of course, things started to change. Then, in the 8th century, theologians expressed their contempt for us.

Our trust in humans led to betrayal and a complete about-face in the belief in the goodness and value of us cats. The worst came when Pope Gregory IX officially condemned us as vessels of the devil and enemies of God. Outrageous charges were brought against us. Soon we became the targets of persecution.

They killed thousands of cats by throwing them in fires, or cats died by other cruel measures. Cats became associated with witches. This torture and killing of cats continued for over 400 years!

As a result of the killing of so many of our kind, the rats grew and multiplied, and eventually brought the Black Plague, which turned the tables by killing many, many people. If they had only left us cats alone, we’d have solved their rat problem.

You two-leggeds don’t give up your beliefs easily. Our rescue came from an unexpected source, seafaring vessels. For fishermen and traders,  having a cat on the ship ensured that their vital food supplies would not be consumed by rats and mice, and we finally found a place again where our talents shone, and we became accepted and even loved.

Stories about seafaring cats abound in this section, ready for you to read and enjoy. You will even

find a story about the first cat in space.

I have to tell you — I am beginning to like those pictures. How well they illustrate moments in our history! Baba, I think you and Paul must find your photo sessions an opportunity for a game together.

You must love your two-legged a great deal. You knew he found taking those pictures a kind of game the two of you played. As he had the role of your Alpha male, you liked pleasing him, and posing in those costumes obviously gave him pleasure. Besides, I’m guessing he paid you good wages in treats to pose for him. You certainly have given a fine performance with these pictures. Perhaps you are ready for the movies.

Finally, we reach the chapter on redemption and enlightenment and the rise of the modern feline. Our spirits could not be broken, in spite of all the killing over centuries, and finally, we again proved our worth on sailing vessels.

One of our champions, Cardinal Richelieu, chief minister of Louis XIII, loved us and pampered us.

Now, new cat advocates from high places began to appear, and gradually the attitude toward us changed.

You will read many stories of the famous people who championed our cause, and you might agree with me that it was about time some attitudes changed!

Then, in 1871, Harrison Weir started the first Cat Fancy show, before we even had such things as cat breeds. However, the show went over extremely well, and with the cat show movement started, it helped establish our rising popularity.

Next we came to America, and considered it a new beginning. We came as protectors of vital stores in ships, and soon found a place in the new country.

Read how we cats gradually conquered the New World, and some of our early adventures there. Learn how we helped out in many ways, even during times of war. In the 1950s, feline prestige grew with the establishment of the Puss ‘n Boots Award. You’ll read stories about cats who won this fine

Enjoy the story of Room 8, a cat who adopted a school classroom and returned every school-day for 16 years, as this cat charmed students and teachers alike in that room. Your heart will be warmed.

Room 8’s story comes last in the book. There follows a section of photos and news stories about certain cats, providing a fun read on its own.

I’m so glad you told our story, Baba. You did it well. I have even grown fond of the pictures with these stories. You have captured the essence of the period you portrayed. I guess there are times when dressing in a costume becomes something of value.

I still wish, however, that your two-legged had placed one full-size picture of you in the book, showing your gorgeous natural furs.

At the very end of the book, we find a section written by your two-legged, Paul Koudounaris, to whom you dictated this cat history. He discusses all the photos of you shown in costumes which fit the story. He says you now have a bigger wardrobe than his own. These pictures in themselves give us a great addition to the adventures told on the pages.

A Cat’s Tale: A Journey Through Feline History

by Henry Holt and Co.