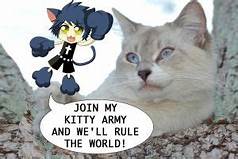 I’ve seen several Quora questions lately on this topic: Do cats protect their owners? This subject provided interesting research, and as it turns out, there are many stories of the cat doing just that.

Cats are territorial, and do not like any uninvited intruders. Their territory includes not just the property, but the house and everything in it, including their human family. If someone intends to do harm to a family member in the cat’s presence, that person may suffer some unexpected consequences.

Here are some examples. Perhaps you saw the video of the cat who chased a dog from his front yard. The dog attacked the four-year-old child who was part of the cat’s human family.

When the dog attacked, the cat was on him in a flash, and swiftly dispatched that dog out of the yard and far, far down the street. The child was okay, thanks to the cat’s timely intervention. 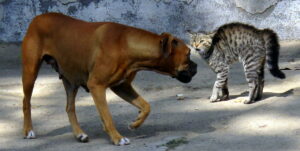 There is a story online about a clawless cat who chased a black bear up a tree. Such large creatures did not belong in his yard. After about 15 minutes up the tree, the bear finally ventured down, only to be chased up another tree by the cat. The bear finally gave up and left the premises.

That reminds me of a story I read about a woman in Juneau who had a confrontation with a black bear. This one is not about a cat, but I couldn’t resist — somehow it fits here.

A woman in Juneau, Alaska, let her little dachshund out for its morning constitutional. As she watched, a black bear came into the yard and snatched up the dog.

The woman, enraged, ran out the door, yelling at the bear. She ran up to it and punched it in the nose. I wonder if she realized that a bear’s nose is especially sensitive. The bear immediately dropped the dog and ran off. For sure, that woman must have been a cat in a former life.

Here is another story: when a fire started in a back bedroom, the cat of the house woke the owners, who had fallen asleep on their couch. The woman was seven months pregnant with twins.

The fire destroyed most of the house, but the owners and the cat were safe. The fire department folks said they didn’t know what the outcome would have been had the cat not awakened the sleeping couple, but they said the cat was a hero.

A woman in Wisconsin credited her 21-pound cat with saving her from a diabetic seizure. This act happened only hours after she had adopted the cat from a shelter.

She went to bed about 9:30 pm. Ninety minutes later, she started to have a diabetic seizure. The cat sensed something was wrong. He sat on her chest and began swatting her face and biting her nose.

She awoke sufficiently to yell for her son for assistance. The cat helped by running to the boy’s bedroom and jumping on the bed, startling him to wakefulness. He was able to get the help his mom needed.

There are so many stories of cats’ saving humans from disasters of many kinds. There are three posts on my website with summaries of stories from a book called “Super Cats.” (There are 90+ stories in this book.) You can purchase this book from Amazon by clicking on the link at the end of this post. Here are links to the three posts (Can you tell I really like this book?)

I have seen a few examples of cat protectors in my own life. Once, some friends came to visit. We had a small screened porch accessed from the front door. These folks brought their dog in the house with them.

The cat came out to see what was going on. What was this dog creature doing in here? She saw that strange dog and immediately went into battle mode. With a tremendous war cry, she jumped on that dog and rode him around the 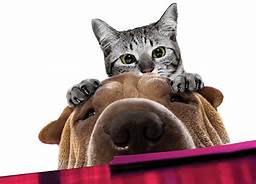 porch, while the terror-stricken dog tried to escape.

We finally got the door open so the poor dog could go out, and the cat settled down again. Who knows what damage that infidel dog could have done — the cat, though, was on watchcat duty, and was having none of it.

Another time, as I tried to chase off a dog who made the mistake of coming up my driveway, the cat came out to help. I was advancing on the dog, shouting at it to “go home,” and waving my cane in the air.

The cat came out of the woods and started walking along beside me. All his hair stood on end and he yelled his own version of “go home, dog.” The dog stopped moving and stared at us in amazement.

I stopped walking and considered. Our advance toward the dog was not having the desired effect. I said to the cat, “Go get him, Carlos.”

Carlos must have been just waiting for permission, because he then ran at accelerated pace right toward the dog. I thought I’d see another example of a cat riding a dog, but the little fellow must have realized he was in danger.

Just as the cat reached him, the dog turned around and ran back down the driveway. He didn’t stop and he didn’t look back; he just ran like the devil was chasing him. The cat watched him go, looking satisfied.

When we lived in Pueblo, we lived in a neighborhood that had many small dogs. Our yard had no fence, so they were frequent visitors. My ninja cat used to sit on the front step and watch and wait. When a dog made the mistake of walking into our yard, the cat would go into action, chasing the dog off and down the street.

I’m not sure if he was being protective or just showing a lot of cattitude. He did keep the dogs away, and may have at least kept our yard free of dog poop. He was better than a sign saying “No dogs allowed.”

I do believe that cats can protect us from many dangers because of their fine-tuned senses. Often they have been life-savers. I for one am glad to be part of my cat’s territory. I don’t believe you can train a cat to attack, but with their natural instincts to protect their “territory,” both human and otherwise, I believe they will do what they can.

If you would like to read more stories about hero cats, be sure to click on the link below and order your copy of the book, “Super Cats.”

I used the following online reference for this article:  today.com/pets/good-kitty-these-6-hero-cats-saved-humans-they-loved-2D79677090