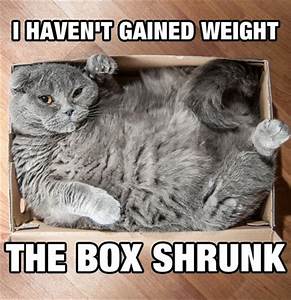 Hello, readers from the world of two-leggeds. Here is the third installment of Letters to Lucinda. In this column, I will address the issue of overweight cats.

In my reading, I have learned that it is not only the cat community that is having problems with too many who are overweight, but it is a problem among the two-leggeds as well. In both cases, it is the two-leggeds who are the cause of this problem, because it is they who decide how much to eat. They provide food for their pets and for themselves as well.

I have received some letters in my mailbox about this problem, and will share two of them here. The first one is from a Mr. Ben Woodman. He writes:

Lucinda, people tell me my cat is fat. I must admit, he is a little overweight, though all that long fur makes him look bigger than he really is. However, I can’t resist when he asks me for more food. He is so sweet and so 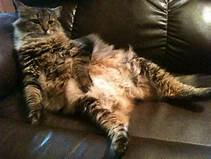 convincing when he tells me he is hungry that I give him what he wants.

He talks to me with little meows and chirrups, making me feel like I am special. He is my best buddy, and I give him what he wants because I want to make him happy. What is wrong with giving him a little extra food when he comes to me and acts so sweet?

Lucinda: I can tell that you feed your cat because you love him and want to make him happy, but you are doing him a great disservice. He has become so addicted to eating food that he eats whether he is really hungry or not. By doing so, he is seriously compromising his health.

When cats lived in the wild, they ate whenever they could, because they never knew where or if they would find another meal soon. A cat living with two-leggeds rarely has to worry about not being fed. Therefore, it is not necessary for him to eat every chance he gets.

The list of bad things that could happen to your cat because he is overweight is horribly long. I am no genius cat, and do not really understand what all these health terms mean, but you two-leggeds will probably understand and realize the seriousness of the threat to your cat’s health.

Here are some things that could happen. He is at an increased risk of cancers of all types. He could contract diabetes mellitus, heart disease, or hypertension.

His joints will degenerate faster because of all the extra weight his legs have to support. His life will be shortened. He can get arthritis, or develop high blood pressure. He may get a urinary tract disease. These are only some of the health problems he could have.

You should be able to feel your cat’s ribs if you gently squeeze his sides. He should have a waist, with the body becoming more slender from belly to hindquarters. He should not have a swinging pouch between his hind legs.

If you decide to help him slim down, don’t put him on a crash diet, as losing weight too fast can be dangerous too, and puts him at risk of something called hepatic lipidosis, which is potentially fatal.

Feed him three or four small meals per day, from a meat-based diet. Cut down quantities gradually. Weigh him regularly to see if he is losing.

Since you love your cat, you will be doing him a great favor by insisting that he lose weight.

This next letter comes from Luther, a cat from across town that I met recently.

Lucinda, my owner says I am fat, and wants to put me on a diet. Why? I like eating a lot, at all times of the day. I find it most satisfying to come back to my food bowl again and again to eat. I don’t mind if I’m a bit pudgy. 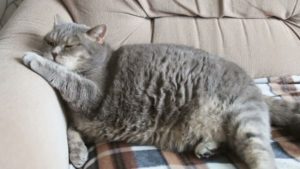 I have had a feeder that my two-legged keeps full all the time so he won’t need to worry about my being hungry while he is at work.

Why would my two-legged now want to take the pleasure of eating whenever I want away from me?

Lucinda: Luther, you are in great danger. You have gotten in the habit of eating more and more food, when you don’t really need it. You must stop eating so much!

Many cats can be manipulators, using their two-legged’s affection for them to get the two-legged to do whatever his feline wants. They effectively wind that big animal around their soft paw. The cat is then in control. He will get whatever he wants, even if it is not good for him.

Luther, if you keep on in this way, you could come down with any number of serious illnesses. You will end up taking many trips to the Cat Torturer to try to get you over your illness. You will end up feeling terrible all the time, and very likely you will die young.

Is this what you want? Do you have a death wish? Maybe you just didn’t realize how serious a problem you were creating for yourself. It’s time to change your ways.

I hope all you cat parents take this message to heart and work with your cat to get him back to a healthy weight. In the end, the cat will be happier, healthier, and will be glad for it.